OBU will host two Black History Month events Wednesday, Feb. 27. Judge Ashleigh Parker Dunston will present a lecture in Stavros Hall 214 at 4 p.m. A screening of the documentary film, “13th,” will follow that evening at 8 p.m. in Raley Chapel’s Yarborough Auditorium. A discussion will take place following the film, including Dunston along with panelist Steve Noble. They will be joined by guests from OBU. 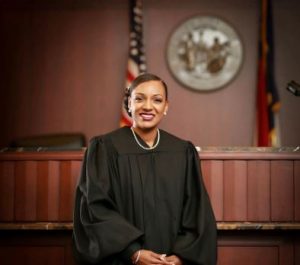 Dunston serves as a district court judge in the Tenth Judicial District in North Carolina. Upon swearing in on Nov. 17, 2017, at the age of 30, she was the third and youngest African American female District Court Judge in Wake County history since the courts were established. Since that time, she has presided in almost all types of criminal and domestic courtrooms ranging from traffic offenses, assaults, DWI, domestic violence, lower-level felony pleas, involuntary commitment, probation violations, family and child support matters. She prides herself on being fair and respectful to everyone, knowledgeable of the law and visible in the community.

She earned her Bachelor of Arts in Psychology from Wake Forest University. She then attended North Carolina Central University School of Law where she graduated cum laude. She has been practicing law since she was 24 years old. She has been recognized as an NCCU Alumni 40 Under 40 and received the 10th Judicial/Wake County Bar Association President’s Award of Excellence and the 10th Judicial/Wake County Bar Association Professionalism Committee’s Spotlight Award for public service. In 2018, she was awarded The City of Raleigh Fair Housing Hearing Board’s Leadership Award and the “Salute to Champions” Award from The Sports Shop Radio Show. She and her family reside in the Raleigh area.

Steve Noble is the host of Call2Action, a radio show that launched in November 2007. His business Call2Action, which started in 2004, has taken him all over the world. Most notably, he has travelled on mission to Africa, Thailand and Iraq. He and his family likewise reside in the Raleigh area.

The documentary screening of the film “13th” will take an in-depth look at the prison system in the United States and how it reveals the nation’s history of racial inequality. The film

Following the documentary, there will be a discussion led by Dunston, Noble and other guests from OBU. The day’s events are open to all students, faculty and staff.