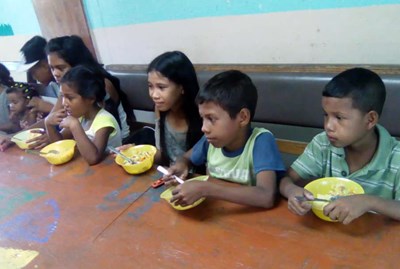 VENEZUELA (BP) — Thousands of Venezuelans of all ages, across the entire nation, have marched on the streets in protest of the Nicolás Maduro regime. Scores were shot dead, more were beaten, hundreds rounded up and detained, according to media reports.

Venezuelan children receive a meal at God of the Harvest Church. “I believe this to be the most important phase of the Venezuelan Church,” said Richard*, the church’s pastor. “Opportunities are increasing.” The church feeds 75 children and elderly adults twice each week.
IMB photo

As 2019 unfolds, the infrastructure continues a downward spiral, hyper-inflation has exceeded 1.5 million percent, food and medicine are increasingly difficult to acquire. And 3 million or more out of 31 million Venezuelans reportedly have fled the country in the past few years.

As the population dwindles, many leaders have left God of the Harvest Church, where Pastor Richard* and Leah* serve. This couple send their congregation out with a blessing, knowing they take the Gospel with them. Meanwhile, the pastor said God continues to be at work in the region and that, for each person who has left, new believers have joined the church.

“I believe this to be the most important phase of the Venezuelan church,” he noted. “Opportunities are increasing.”

He reports that it is true that people are feeling hopeless — not only those waiting in long lines to buy a tiny bit of food for a huge price, but also pastors who are ministering in this situation.

“But we understand God has us here,” he said.

Despite the tremendous scarcity of basic resources in Venezuela, 90 percent of Baptist churches hosted Vacation Bible Schools in 2017 and 2018, each year reportedly reaching 250,000 children and their families across the country. God of the Harvest Church also hosts block parties where church members paint children’s faces, make balloon animals, and help people have fun even in the midst of grueling daily struggles.

‘Thanks be to God’

Additionally, the church ministers through a food center which began two years ago to nourish about 75 children and elderly adults twice a week. Since then, through Baptist Global Response (a ministry partner of the International Mission Board) and The RaVenz Project (a feeding program for vulnerable Venezuelans begun and run by IMB missionaries and carried out with offerings from Southern Baptists and others) the church recently was able to begin serving food to similar numbers of people in three additional locations in the area.

The church holds clinics to provide medicine and basic health care and instructions to the public. With many young people leaving the country, it also wants to set up an elder-care home to help those who no longer have family members nearby.

Pastor Richard has long had a vision for developing a sustainable farm to feed church members, provide jobs, and help feed needy children and elderly in the community. For years, alongside the church youth, he invested blood, sweat and tears in the project but with slow advances due to lack of resources. Thanks to funds from Baptist Global Response, this project was able to make a huge leap forward late last year, with progress already being seen early this year. Not only was additional land developed and seeds planted, but a pond was dug and stocked.

Richard asks Christians to pray that “God will help us to remain firm, with a strong faith, and high courage. This work is not easy, but it must be done. Thanks be to God that He allows us to be part of His team during these interesting times.”

For additional information on how you can help, click here and scroll to the bottom of the article for more details.