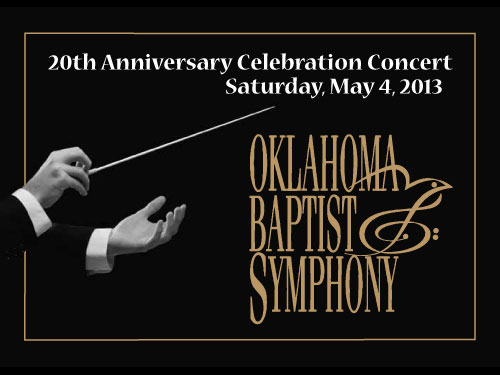 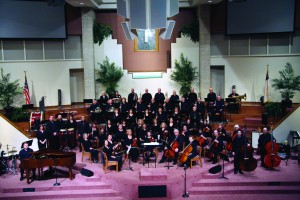 The Oklahoma Baptist Symphony, shown at a concert in 2012, celebrates its 20th anniversary May 4.

The heart of the Oklahoma Baptist Symphony (OBS) first began to beat with the first wave of the baton in rehearsal by Jon Duncan, music department associate of the Baptist General Convention of Oklahoma (BGCO) on Aug. 20, 1993.

“This is history in the making,” Bill Green, BGCO church music department director, told the musicians at an organizational rehearsal.

Now, two decades later, “Amazing Grace” will be the theme of an evening of worship beginning at 6 p.m., May 4 at Oklahoma City, Southern Hills, 8601 S. Pennsylvania Ave., celebrating 20 years of musical excellence with the OBS.

“We invite all Oklahoma Baptists to join us as we celebrate the establishment of a rich tradition in instrumental worship and God’s amazing grace,” said current conductor Michael Raiber.

The OBS is comprised of volunteers from every walk of life and from every corner of Oklahoma. Each member desires to praise God through the musical skills he or she has been blessed to receive.

The year 2001 was significant for the OBS, which was the first state Baptist orchestra to open the Church Music Leadership Conference at the Lifeway Glorieta Conference Center in Glorieta, N.M. on July 14 with a concert. Some 1,500-2,000 people heard about 60 members of the OBS present a full, 75-minute program.

“The tradition continues to build with the commitment of its members to allow God to use their instruments as a ministry and a witness to all who hear them,” Raiber said, adding that “Former members are invited to join the celebration.”

In addition to the concert Saturday evening, a banquet luncheon earlier that day will honor current and former members of the Symphony and their families.

As part of the festivities, all of the former directors of the OBS will be in attendance at the concert, and lead the group at some point during the evening.

The mission statement of the OBS reads, “The purpose of the Oklahoma Baptist Symphony is to provide a spiritual focus which will: emphasize the beauty of God’s creation and His mighty power; point the hearts of people to the Lordship of Christ; lead people to worship; prepare the hearts of people to receive Christ; challenge people to give their very best to the Lord; and promote the instrumental ministry throughout the state, the nation and the ‘uttermost parts of the Earth.’”

Psalm 150 has been a theme verse for the group:

1 Hallelujah! Praise God in His sanctuary. Praise Him in His mighty heavens.

6 Let everything that breathes praise the Lord. Hallelujah! (HCSB)

For more information about the 20th Anniversary Concert May 4, contact kharris@bgco.org or visit www.bgco.org/obs.