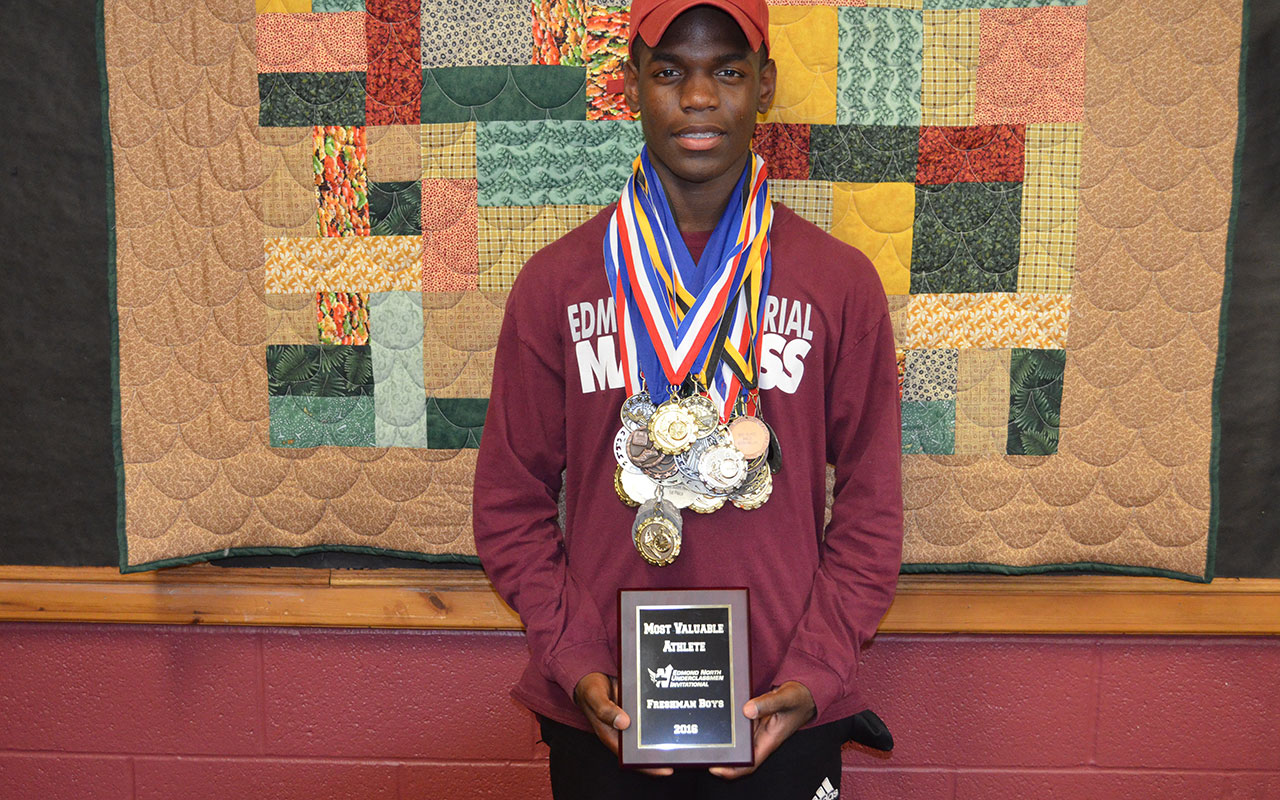 EDMOND—Ask anybody at Boys Ranch Town about Dashawn Collins, and they will say, “He is fast!”

An accomplished high school varsity sprinter, Collins recently completed his freshman year at Edmond Memorial High School. He has been competing in track since seventh grade and has collected an abundance of medals from track meets. He also claims the state freshman record for the fastest time in the 400 meter relay.

“I was always fast,” Collins said when asked why he pursued competing in track.

For more than two years, he has been a resident at Boys Ranch Town, which is one of the residences of Oklahoma Baptist Homes for Children (OBHC). He said it was not an easy adjustment when he first arrived at the home in North Edmond.

But then he met Albert, who became like an older brother to him, and Collins had a different outlook on his home.

“Because (Dashawn) is in state custody, it wasn’t his choice to come here,” said Kayla Siler, a caseworker at Boys Ranch Town. “When he came, he was slow to warm up to anybody. But once he does (warm up), he will do anything for you. Albert is an older version of Dashawn, whereas he is athletic, and resembled Dashawn’s personality, so they became really good friends.”

Albert’s influence was a major factor for Collins competing in track and running in multiple events, including 100 meter, 200 meter and multiple relays, including Collins’ favorite, the 4×400 meter relay. He usually runs the first leg, but for the 4×400, he is the anchor leg.

Collins remembers trying out to compete on varsity, and said it was a fun experience for him. He said his coach told him if he could run the 400 meter under 50 seconds, he could run on the varsity team. Collins ran a 49.5. When he broke the state freshman record, he ran a 48. He admits competing in sports comes easy for him.

“Track is a very big ‘carrot’ for Dashawn,” said Siler. “He IS fast. He wins something every time he runs. He is very dedicated to it. But track also helps him stay on track with his school work. He loves to run. That falls into that motivating factor because ‘I’ve got to be on my best behavior here because if I don’t follow the rules here, I’m not going to get to run in that meet because it’s a privilege it’s not a requirement, so he will work really hard, especially during track season.’”

Living at Boys Ranch Town and competing in track are positive motivators for Collins. He said he knows he has made positive changes.

“Before I came here, I was pretty rude. I didn’t care who I hurt or how I hurt them,” said Collins. “Now, I care more about people.”

Siler said there has been a great change in Collins in the past two years. Though he still maintains a quiet personality, he has shown a very giving and caring spirit.

“He has the most compassionate heart,” she said. “He cares for people. He’s a hard worker. He loves to be outside. He is very quick to write a letter to somebody to apologize. He goes and does it on his own. He has a sweet spirit and is so special.”

It is a common system among the Boys Ranch Town residents to encourage and show support of other boys, especially those who are new to the home. As Siler points out, just as Albert was an encourager to Dashawn, Dashawn has now replicated the practice.

When asked if he thinks he could run in the Olympics some day, Collins said, “My house parents think I can.”

Collins is featured in OBHC’s Prayer Calendar Update for June. Angela Sanders, a featured writer for WordSlingersOK.com, wrote about Collins in the publication.

“Reserved, but confident, he actually downplays his success, neglecting to mention his undefeated track record, the college scholarship he was recently offered as a result of that record, or the fact he has enough medals and trophies to fill an old-fashioned treasure chest,” Sanders’ article states, describing Collins.

The publication also features Collins admitting living at the OBHC residence has changed him for the better.

“We go to church every Wednesday and Sunday,” he explains. “We also do devotions in the cottage at night. Sometimes I’m so tired from sports that it’s hard to stay awake, but it’s worth it when I do. I learned that we should all accept God as our personal Lord and Savior.”

Collins shared he made such a profession of faith during one of those evening devotions.

The future is bright for this young athlete. Perhaps the day may come when Dashawn Collins will be featured in the Summer Olympics. But one thing is certain, he made a life-changing decision that is worth more than a gold medal.