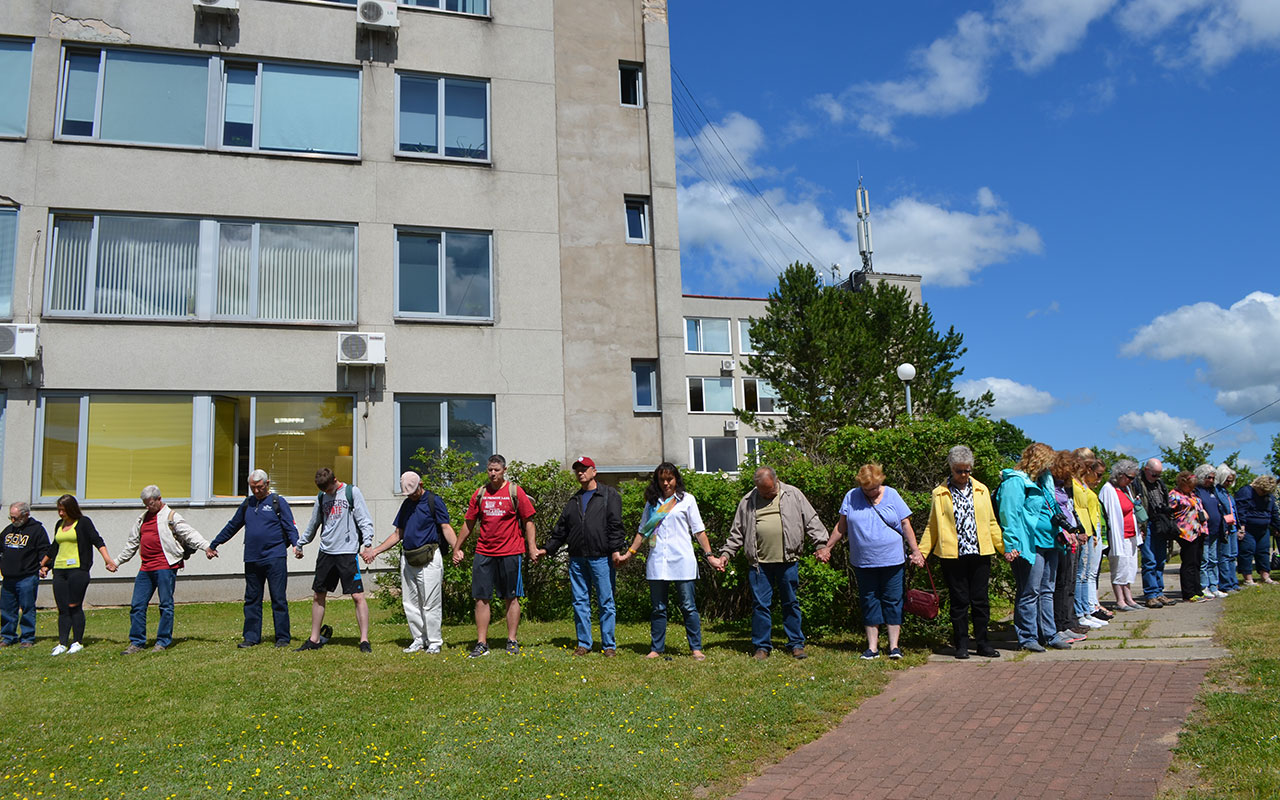 RIGA, Latvia—It’s pretty much a foregone conclusion that most people probably don’t have Latvia on their “Bucket List” of places to visit before they die, but you can’t convince almost 150 Oklahomans that the Baltic country isn’t one of the most beautiful places on Earth after they spent six days there as part of the Singing ChurchWomen of Oklahoma’s (SCW) mission trip to Northern Europe, May 30-June 9.

In fact, “Latvia is a beautiful country” was a phrase used by nearly every person who went on the trip and composed short reflections about their experience, which also included stops in Finland, Estonia and Sweden.

• “Latvia is a beautiful country! The people are so proud of their rich heritage! They are warm and friendly!”

• “Riga (The Capital) has some beautiful architecture and parks.”

• “Country is beautiful. Love the flowers! Clean. Lots of trees, parks and history. . . .”

And, apparently, many Latvians were impressed by the Americans, as well. One of them expressed it this way: “I expected to like you, but I never expected to love you!”

“I was so pleased with how our group ministered to so many while we were in Europe,” said Randy Lind, SCW director. “I thought it was a great mix of a concert ministry into those communities, which gave us a big voice, and then the ladies being able to go into the individual families’ homes and get to know them on a personal level and pray with them and then visit the orphanage and nursing home and connect with young students in Talsi, made for very  solid ministry.

“Our people now have direct connections to many churches in Latvia. We really didn’t plan it that way, but it’s an excellent strategy. Anytime we form a partnership and send in one of our big ministry groups like that, it kind of opens up the country, because all of a sudden, you have at least 140 people who know what their churches look like and they will be direct connections to their ministries in the future.”

In fact, Peteris Sprogis, bishop of the Latvian Baptist Union, encouraged the Oklahoma group to consider themselves “ambassadors of Latvia to Oklahoma” when they got home in thanking the group during a farewell dinner, Tue., June 7.

As the trip progressed, Lind accepted donations from those in the group to go toward  Camp Gantbas, which is sponsored by the Baltic Pastoral Institute (BPI) headed by Sprogis, and is located near the Uzava River adjacent to Sprogis’ family farm. At the farewell dinner, Lind presented more than $3,300 which had been donated. Also, the Baptist General Convention of Oklahoma is helping the BPI construct a barn at the camp large enough to seat 200 people.

“We will not have to use a large tent in the future for our meetings as a result,” a grateful Sprogis said.

Three especially moving stops on the trip included a visit to the state-run orphanage in Jelgava on Sat., June 4, a medical clinic held for indigent persons at Matthew Baptist Church in Riga on Sun., June 5 after one of the SCW groups had sung at three worship services that morning, and a visit and concert at the Talsi Christian School on Mon., June 6.

The orphanage was home to about 60 children, ages 2-17, mostly female. Sadly, the director said the facility averages only two adoptions per year, with many of the children going to the United States. She said only two domestic adoptions have happened in her 22 years as director.

The orphanage is state funded, and the children go to public schools.

Those SCW who went to the orphanage gleefully shared smiles, hugs, toys, candy and chewing gum with the very receptive boys and girls, who readily made friends with the Americans.

At Talsi Christian School, founder Inguna Gruznina gave the entire group a history of the school, and students led small groups on tours of the town itself before lunch. The SCW presented a concert before a packed house in the gym, during which longtime supporter Eric Dennis, pastor of Madill, Cross Roads, spoke—some even in Latvian to the delight of the crowd.

The school, opened in 1995 with five teachers and 37 students, now has 36 teachers and 268 students. Gruznina is in the process of raising $1.2 million for a building project, and the SCW joined hands and prayed over the site for God’s provision for the project.

With major concerts at St. Olaf’s Church in Tallinn, Estonia; The Great Amber Concert Hall in Leipeja, Latvia; St. Peter’s Dom in Riga, Latvia;  and Talsi Christian School; the SCW shared the message of God’s love and Christ’s saving sacrifice with hundreds of people during their trip.

They, themselves, were touched by what they saw and heard, too.

As two of them commented:

“It touches my heart to see brothers and sisters in Christ from a different culture and part of the world living, serving and loving God.”

“The time spent with the families from different churches was meaningful. Developing a personal relationship with the family was priceless. We are not really that different. Other than language, culture and location, we have the same hopes and dreams, struggles, passion, etc. This will be a most lasting experience for me.”