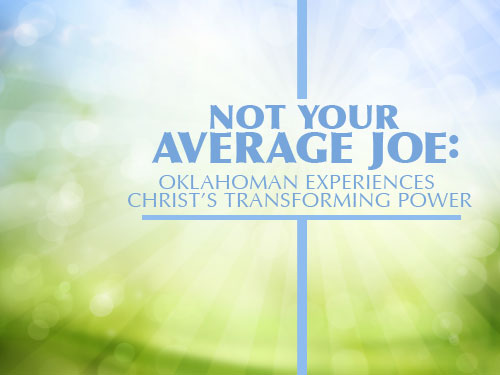 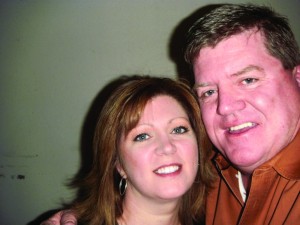 Angie and Joe were married on Aug. 26.

DURANT—Joe Black was a tough man to crack. But once that crevice opened up, God spread it apart and a ministry full of blessings flowed freely out of what once had been a rock-hard shell.

Black’s brother, Bill, pastor of McKinney Street Church in Denton, Texas, gave his life to Christ when Joe was about 20 years old. From that day, Bill faithfully prayed for his brother, and took every opportunity to share the Gospel with him.

“I wasn’t ready to hear the Good News,” Joe confessed. “In fact I didn’t think it was such good news. The idea of giving up all the things I enjoyed to serve God seemed pretty stupid to me.”

Joe said as Bill slowly turned conversations toward Jesus, he would cut him off.

“One day, I told him I was tired of him telling me I needed Jesus in my life,” he recalled. “I said I was a nice guy.”

Bill agreed with Joe, but told him, “You can’t get to Heaven by being a good ole boy.”

Joe admitted he tormented his brother by stopping at the liquor store with Bill in the car to buy a bottle of Scotch, or throwing golf clubs and cussing when he hit a bad shot or lighting up a big cigar. 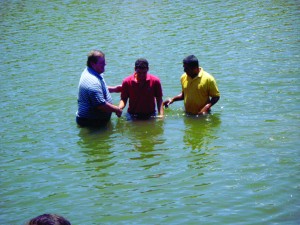 Joe Black baptizes a new Christian in a river near El Tocuyo, Venezuela.

“He invited me to a seminary (Southwestern) golf tournament once,” Joe said. “I guess he thought it would give him a chance to work on me a little more, and also a give me a chance to win the tournament since I was worshipping golf at the time.”

Joe and Bill won the tournament, but Joe shocked Bill’s seminary roommates when they observed beer cans in the trunk of Joe’s pickup, and then made him put his new golf clubs in an old garage sale golf bag, because his had a beer sign on it.

The tide began to turn slightly to soften Joe’s heart when Bill asked him if he was interested in a work project at a Baptist youth camp about five miles from his church. The camp needed a new water line, and couldn’t afford the contractor’s bid of $107,000. Joe had experience installing irrigation systems on golf courses, and would be paid $10,000 to oversee the project.

The next three weekends, Joe drove from his home in Durant to Denton to work on the water line. Bill invited him to spend Saturday night with his family and go to church the next morning.

“I thought it was harmless enough, and if I was going to work with these guys, I should at least go to church with them,” Joe said. “Also I realized my brother had been a preacher for more than 10 years, and I had never once heard him preach.”

Joe said he knew part of his brother’s plan was to soften him up to the idea of God.

“I wasn’t that worried about it though,” he acknowledged. “All I could see was that $10,000 waiting for me, and I also liked my sister-in-law’s cooking. I could risk another sermon for a home-cooked meal.” 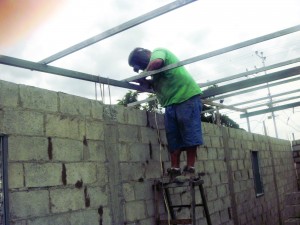 Black welds a crossbeam on the roof of a church in El Tocuyo.

Softening up a bit, Joe decided he would make a list of all the areas he wanted/needed to work on, and then simply fix a few things and join the church. But he said every time he thought he was making progress, he saw more things on his list.

After the third sermon, Joe came to the realization he couldn’t fix it all, and finally understood that God was telling him if he would give his life to Christ, they would work on the list together.

On Monday morning at 6:30, Joe called his brother and told him, “I’m ready.” Joe knelt on a two-man bass boat in the barn where he was and gave his life to Jesus.

The next Saturday, the project was finished, and Joe didn’t want to accept the check, telling Bill he had already received more than he deserved. Bill insisted he take the money. Joe was baptized the next day.

Not only had Joe become a follower of Jesus, he was eager to serve Him, asking his pastor, James Robinson at Durant, First what he could do.

The youth minister at Durant, First at the time, Brandon Brister, was leading a group to Venezuela for a 10-day mission trip, so Joe decided to tag along to see what God was doing in other parts of the world. He said he fell in love with the Venezuelan people and the power in which he saw God working.

He got involved in other ministries at the church, continuing to grow spiritually. A few years later, he said he started feeling the urge to return to Venezuela.

“On the second trip, I met Luciano, who had quit his job as a police officer to become a missionary for the local church,” Joe said. “As I walked with him that week, I saw and experienced a love for God and a love for God’s people like I had never known before. I promised I would go back the following year and help Luciano with his work there.”

After returning to Durant, as he prayed, he told God he would do whatever He wanted him to do.

“Not long after, God told me to go to Venezuela for a year,” Joe divulged.

Joe said he began to see things God had been doing in his life to prepare him for this mission.

“I had been kept single,” he said. “In my 20s, I could not commit to relationships, and in my 30s, I was frustrated because I had let relationships slip away. When I became a Christian at 38, I thought God wanted to provide me with a wonderful Christian wife, but it was eight years later, and still no wife. I realized if I had a wife and children, I could not commit to a year in Venezuela.”

During his time in the South American country, Joe did construction work for seven months and evangelism for about 6 more months.

“I learned dependency on God like I never knew before,” Joe commented. “The devil met me head on. Three weeks after buying a pickup, it was stolen. The price doubled on the property we want to buy for the church after they discovered we were Americans. I came under attack from areas I would never have imagined.”

Joe said God also taught him how to evangelize in a more personal way, and he learned patience from a slower type culture.

A week before Joe left for the year in Venezuela, he was asked by a concrete company to put on a presentation of what he was planning to do there.

“I tried not to stare at the beautiful lady who helped me set up my laptop for the presentation,” Joe said. “When I returned home six months later for a visit, I was asked to give an update to the company. There was that beautiful lady helping me again. This time I got up the courage to ask her to go to dinner with me. Angie and I hit it off right away.”

Joe said after seven more months of Skype and one more visit home, he and Angie were engaged.

“You know when an excited child buys a gift for his dad and can’t wait for him to open it, and starts helping him get the paper off, I think this is what God was doing. Only about half way through my scheduled year, it’s like God was saying, ‘This is what I have waiting here for you when you get back.’”