CHARLOTTE, N.C. (BP) — Norman Geisler, one of the foremost defenders of the Christian faith in the discipline known as apologetics, died Monday (July 1). He was 86.

Tributes to Geisler soon appeared in Religion News Service, Christianity Today and WORLD Magazine, among others. 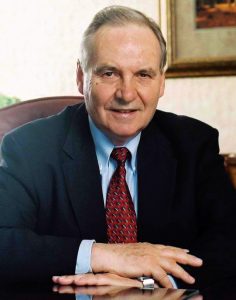 Rob Phillips, who leads the apologetics ministry of the Missouri Baptist Convention, recounted to Baptist Press, “I first encountered Dr. Geisler more than 30 years ago when I saw him defend the deity of Christ on a television program. He spoke with such conviction and clarity that I began buying his books. To this day, one of my favorite apologetics resources is a book he wrote with Frank Turek, ‘I Don’t Have Enough Faith to Be an Atheist.’

“In many respects, Dr. Geisler was the layman’s scholar,” said Phillips, author of a new book, “What Every Christian Should Know about the Trinity.” Geisler had “a unique ability to unpack complex doctrinal issues in a conversational way that every Christian could understand and share with others,” Phillips said. “I am deeply grateful for the legacy he built for the benefit of all who seek to defend the Christian faith.” (See Phillips’ descriptor of apologetics following this article.)

Geisler was on the drafting committee for the 1978 Chicago Statement on Biblical Inerrancy, joining Carl F.H. Henry, Francis Schaeffer, R.C. Sproul, Harold Lindsell, J.I. Packer, John MacArthur and others as its first signatories.

He wrote four-volume and one-volume works in systematic theology, spanning nearly 4,500 pages. In “The Apologetics Study Bible,” published through LifeWay Christian Resources of the Southern Baptist Convention in 2007, he contributed articles on “Has the Bible Been Accurately Copied Down Through the Centuries?” and “How Can We Know the Bible Includes the Correct Books?”

Philip Tallon, chair of apologetics at Houston Baptist University and assistant professor of theology and author of “The Absolute Basics of the Christian Faith,” wrote in comments to Baptist Press, “Anyone who has spent time in the world of apologetics will be familiar with the work of Norm Geisler. His prolific output marked him as a figure to be reckoned with and to wrestle with. It’s impossible to imagine the current state of apologetics being what it is without his work.”

Melissa Cain Travis, HBU assistant professor of apologetics, told BP, “While I never had the honor of meeting Dr. Geisler in person … I’ve lost count of how many of my associates and friends have mentioned Dr. Geisler’s profound influence upon their work. His legacy is unfathomable.”

Geisler was the co-founder of Southern Evangelical Seminary in Charlotte, N.C., in 1992, serving as its president from 1998-2006, and of Veritas International University in Santa Anna, Calif., in 2007, serving as its chancellor until retiring from public ministry in May of this year.

RNS stated that Geisler stepped away from teaching due to health reasons while Christianity Today reported that he had been hospitalized over the June 28 weekend for a blood clot on his brain.

Richard Land, the current president of Southern Evangelical Seminary, noted that “a spiritual giant walked among us,” in a news release after Geisler’s death.

“Christendom has lost one of its greatest advocates and defenders…. We take comfort in the fact that the prodigious work product he left behind will continue to inform us and to equip us more ably to fulfill God’s purposes in our ministries,” said Land, who led the Southern Baptist Convention’s Ethics & Religious Liberty Commission from 1988 until his 2013 retirement.

Co-founder of the International Society of Christian Apologetics in 2006, Geisler held a Ph.D. in philosophy from Loyola University in Chicago; master’s and undergraduate degrees from Wheaton College in Illinois in theology and philosophy, respectively; and an advanced theology degree from William Tyndale College in Michigan.

“More than a half-century of Christian experience has led me to the conviction that few enduring lessons in life come through pleasure. All of mine have come through pain,” Geisler, the son of alcoholic parents in Michigan, wrote in an article for the Billy Graham Evangelistic Association in January 2018 titled “A Good God in an Evil World.”

He wrote of the “untimely death” of his daughter Rhoda, though not recounting specifics. The trip from Asheville to Charlotte after receiving the news of her death, he wrote, was “the longest two-hour trip I have ever taken. It felt like I was in a submarine, peering out through an ocean of tears.”

Geisler is survived by his wife of 62 years Barbara Jean, six children, 15 grandchildren and three great-grandchildren.

His funeral will be at 3 p.m. Saturday, July 6, at Calvary Church in Charlotte.

Art Toalston, a former editor of Baptist Press, is the author of "A Pandemic Proposal: Viral Vitality ... Hope for the Human Soul," an ebook available at Amazon, iTunes and other online platforms.

View all posts by Art Toalston