WASHINGTON (BP) — “From the church house to the state house and all the way to the White House, we need to learn how to love one another,” Ronnie Floyd told the crowd present at a National Day of Prayer (NDP) observance May 2 in the U.S. Capitol.

“I want to remind everyone here tonight — government cannot fix us. Politics cannot heal us. But loving one another can change the world,” said Floyd, NDP Task Force chairman and president-elect of the Southern Baptist Convention Executive Committee. 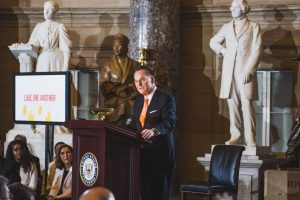 “From the church house to the state house and all the way to the White House, we need to learn how to love one another,” Ronnie Floyd told the crowd at a National Day of Prayer observance May 2 in the U.S. Capitol.
Photo by Bud Sullins

That theme — “Love One Another,” based on Jesus’ command in John 13:34 — dominated this year’s NDP observance, running through the messages and prayers of the more than 20 speakers on the program.

The two-hour event, held in the National Statuary Hall, drew a large crowd in person as well as TV and internet viewers. It was the culmination of a day when people gathered in roughly 50,000 locations across the nation to pray for God to bring revival.

“America’s greatest need tonight … is that the next great spiritual awakening would occur in our generation,” Floyd said.

During the observance, speakers from different ethnic backgrounds led in prayers for government officials, the military and people in need of love all across the nation. The Brooklyn Tabernacle Singers sang at various points in the program. 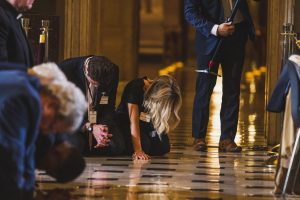 Those in attendance bow in prayer during the National Day of Prayer observance May 2 in the U.S. Capitol. Photo by Bud Sullins

Anthony B. Thompson, pastor of Holy Trinity Reformed Episcopal Church of Charleston, S.C., called Christians to radical forgiveness. His wife Myra was killed in 2015 by a shooter at Emanuel AME Church, along with eight others who were attending the church’s Wednesday night Bible study.

Two days after her death, Thompson said, he felt God asking him if he was going to extend love to the young man who had pulled the trigger. Thompson said yes, and at the hearing, he told the shooter that he forgave him.

Floyd echoed Thompson’s call to forgiveness and transformation regardless of the circumstance. He asked everyone present to pray and repent of the places where they need to extend forgiveness and work toward unity.

He also asked the crowd at one point to break into “prayer huddles” of six to eight people and pray for a life-changing love to sweep the nation. Over the course of the evening, individuals and groups knelt, stood and sat as they prayed for God to change hearts all over America. 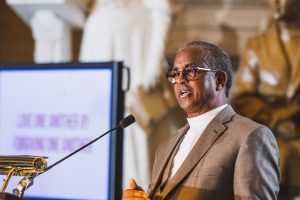 Anthony B. Thompson, pastor of Holy Trinity Reformed Episcopal Church of Charleston, S.C., called Christians to radical forgiveness. His wife Myra was killed in 2015 by a shooter at Emanuel AME Church, along with eight others who were attending a Bible study.
Photo by Bud Sullins

As the night drew to a close, the program switched over to Nick Hall, founder of a student-led prayer and evangelism movement called PULSE, as he led live from Minneapolis. After inviting a volunteer to stand in a large box on stage, he used it as a visual aid to show students in the audience what it looked like for Christ to set them free from the bondage of sin.

Hall then urged listeners to respond to the Gospel and reach out to the NDP team through unitendop.com/next so someone could help them take the next steps to grow as a disciple.

The observance closed with Floyd and the audience reading together the 2019 NDP prayer for the nation, which offered intercession for “a future America that will choose to love willfully, unconditionally and sacrificially just like Jesus loves us.”

Floyd, who is resigning as NDP Task Force president in light of his new position as head of the SBC Executive Committee, sent participants out with a charge to start a “love one another” movement.

“It is time for us to come together, and it is past time for us to learn how to love each other,” he said. “A divided church cannot call a divided nation to unity. Love is the better way.”

The NDP is in its 68th year and has been held on the first Thursday of May since 1988, when Congress amended the law to fix the observation on that day.