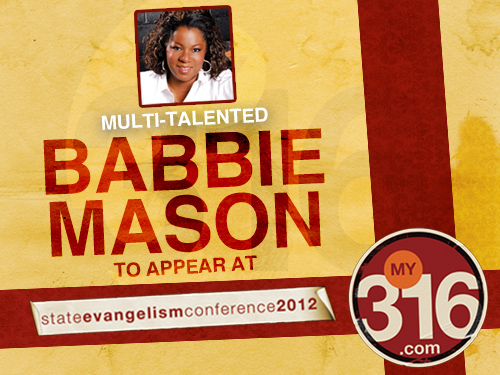 When Babbie Mason steps on the platform at the State Evangelism Conference at Oklahoma City, Southern Hills Jan. 30-31, the audience will hear not only one of the most acclaimed gospel singers in America, but also a prolific songwriter, book author and TV host.

Mason, in her 56 years, has taken top honors in the vocal and song writing categories at the annual Christian Artists’ Music Seminar, captured two Dove Awards; topped the charts with several number one singles and penned award-winning Christian music.

A native of Jackson, Mich., and the daughter of a Baptist preacher, Mason began her musical training as church pianist and choir director at Lily Missionary Baptist Church. She also worked as a public school teacher before founding her own ministry in 1984.

In 1991, she rose to fame with the Dove Award-nominated “With All My Heart,” topping the Christian Hits Radio charts with the single, “Each One Reach One.” The next year, “A World of Difference” scored a Dove nomination for Inspirational Album of the Year. In all, she has 11 Dove Award nominations.

Her number one singles include “God Has Another Plan,” “The Only Hope,” “For the Cause of Christ,” “This Heart of Mine” and “Love is the More Excellent Way.”

Mason has won two Dove Awards, one for musical of the year “Make Us One,” and another for gospel recorded song of the year “Stop by the Church.”

Also a composer, she penned the award-winning classic “All Rise,” one of the most recorded songs in Christian music. Other noted compositions are “Each One Reach One,” “Standing in the Gap,” “Trust His Heart,” “All in Favor,” “Jesus the One and Only,” “Hallowed Be Thy Name,” “With All My Heart” and “Pray On.”

Her songs have been featured in major motion pictures and television shows such as “Showtime at The Apollo” and Denzel Washington’s block-buster movie, “Déjà vu.”

Mason said “Trust His Heart” is one of the most inspired songs she has written. It was composed for a preacher friend who lost his wife and baby in childbirth.

In extreme depression, the preacher held on to the words of Charles Haddon Spurgeon, who had written, “God is too wise to be mistaken. God is too good to be unkind. And, when you can’t trace His hand, you can always trust His heart.”

“Eddie Carswell, who sings with Newsong, and I wanted to write a song of encouragement for our friend, and thus was born the song, ‘Trust His Heart,’” revealed Mason.

Mason said she continues to get mail from people who are encouraged by that song.

Mason has appeared with many gospel artists, has graced the stage with Presidents Carter, Bush and Ford and appeared with the Women of Faith tour.

Of her 15 recordings, her most recent work, “Right Where You Are,” speaks about making daily worship a priority and encouraging believers to walk in empowering faith and joy.

In addition to her musical abilities, Mason has authored two books, Treasures of Heaven in the Stuff of Earth and FaithLift.

Mason is also the host of her own television show, “Babbie’s House,” which is seen in North America, Africa, the British Isles and the Caribbean Islands.

For the last 20 years, she and her husband, Charles, have hosted their own music conferences and workshops, most recently at The Inner Circle, where they mentor and minister together, imparting their knowledge with those desiring to enter into the music ministry and business.

The parents of two adult sons, the Masons live on a farm in West Georgia.

Mason will perform at sessions of the Evangelism Conference, which are scheduled for 1:45 and 6:45 p.m. Monday and Tuesday.

“The Tuesday night session usually runs late,” noted BGCO Evangelism Specialist Tim Gentry. “For out-of-town participants, the decision is to leave after the afternoon session or stay another night in a hotel. I don’t want to compel participants to have to leave midway through the session to travel back home.

“Praying about this and looking at several scenarios, the evangelism conference advisory council (made up of pastors, DOMs and lay leaders) decided to feature one musical artist and one preacher for Tuesday evening. By bringing in a well-known musical artist to have an extended time of singing and then having one nationally known speaker challenge the audience, it was felt that a greater impact could be experienced in a shorter amount of time. So, the hope is that people will want to stay for the final session on Tuesday evening knowing that they will definitely receive a blessing, but also that the session will end by 8 p.m.

“Instead of two sets of music and preaching on Tuesday night there will be just one set. Dove Award winning artist Babbie Mason will lead an extended music session of 30 minutes followed by Robert Smith preaching.”