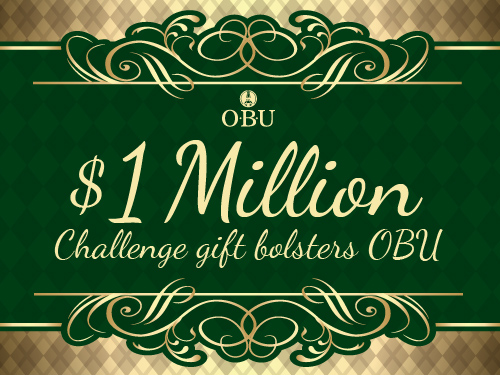 SHAWNEE—A Shawnee couple has issued a $1 million challenge gift to Oklahoma Baptist University, encouraging others in the local community to support the institution’s $42 million capital campaign.

Land developer Paul Milburn and his wife, Ann, a civic volunteer and retired educator, have designated their gift for OBU’s Student Success Center. The gift is contingent on the success of the Shawnee phase of the university’s Vision For A New Century campaign, which was launched in the fall of 2011. When a total of $1.25 million is contributed by the end of the Shawnee phase, in early spring, the Milburns’ gift will push the Shawnee total above $2.25 million.

“This challenge gift will bolster a community effort which has already achieved tremendous success,” said OBU President David W. Whitlock. “For more than a century, OBU has been blessed by Shawnee residents who share our vision for transforming lives. Paul and Ann Milburn are demonstrating exemplary commitment to helping our students achieve even greater success.”

Paul Milburn is owner of Paul Milburn Acreages. He earned bachelor’s and master’s degrees from Oklahoma State University. The longtime Shawnee resident has received numerous awards for community service. He was honored by OSU for funding the Paul Milburn Tutoring Program at OSU in 2011.

“We continuously gain appreciation for OBU as we get to know the administration, the staff and the quality of students from many states and foreign countries,” Milburn said. “It is refreshing to learn of the vision for the future of making this highly rated university an even better institution.”

OBU’s Student Success Center is designed to assist students of all majors, classifications and academic needs with comprehension of course material as well as in the development of study, research, analytical, reading, writing and critical thinking skills. The center offers help with writing assignments and tutoring in core subjects, mathematics, chemistry, physics, accounting and economics. The center also provides aid in research, organizing study groups and academic feedback.

“My personal experience with education is still thrilling after many years to think about it,” she said. “I chose to be an educator early in college. OBU brings back memories of the college and university I attended. OBU is respected in all circles because of the students’ dedication and the accountability of the administration and instructors. It can only grow stronger.”

Mrs. Milburn earned a bachelor’s degree from Oklahoma College for Women and a master’s degree in education from Southwestern OSU. She received the Teacher of the Year Award while teaching in the Snyder Public Schools.

The Vision For A New Century drive is the largest ever undertaken by the Shawnee-based institution. The Milburns are serving as honorary chairs of the Shawnee phase of the campaign, which has a base goal of $1 million and a “challenge” goal of $1.5 million.

Major objectives in the overall campaign include construction of two new buildings, renovation or expansion of three existing structures and growth of the university’s endowment funds, which generate income for student scholarships and other ongoing needs.

The campaign’s new construction projects include a nursing/allied health building and a student services center. The nursing/allied health building, to be constructed at the southwest corner of the MacArthur and Kickapoo intersection, will house OBU’s rapidly growing College of Nursing. Construction of the student services center will be southeast of the intersection of MacArthur and Raley Drive.

Renovation and expansion of the W.P. Wood Science Building, renovation of Ford Music Hall and renovation and re-purposing of Agee Residence Center also are included in the campaign objectives. Agee Residence Center, the main OBU men’s housing facility, will be converted to house administrative and athletic areas. The dormitory will be renovated in phases as the university completes a new student housing village north of MacArthur Street. OBU trustees approved construction of the housing village during their October 2011 meeting on the campus.

“The Milburns’ challenge gift is taking our Shawnee phase far beyond what we anticipated,” said Bill Holley, OBU associate vice president for university advancement, who is directing the local phase. “We have seen major support from several individuals in our community. It is very encouraging to see local businesses and individuals demonstrate their belief in OBU.”

Founded in 1910, Oklahoma Baptist University has operated in Shawnee since it first offered classes. Local civic leaders negotiated with leaders of the Baptist General Convention of Oklahoma to have the convention’s one university located in Shawnee. The initial campus of 60 acres included one building, now known as Shawnee Hall. Today, OBU’s 200-acre campus includes 34 major buildings. OBU’s overall enrollment for the fall 2011 semester totaled 1,871 students, representing 38 states and 27 other countries.

Marty O’Gwynn is associate vice president for university advancement and assistant to the president for special projects at Oklahoma Baptist University.