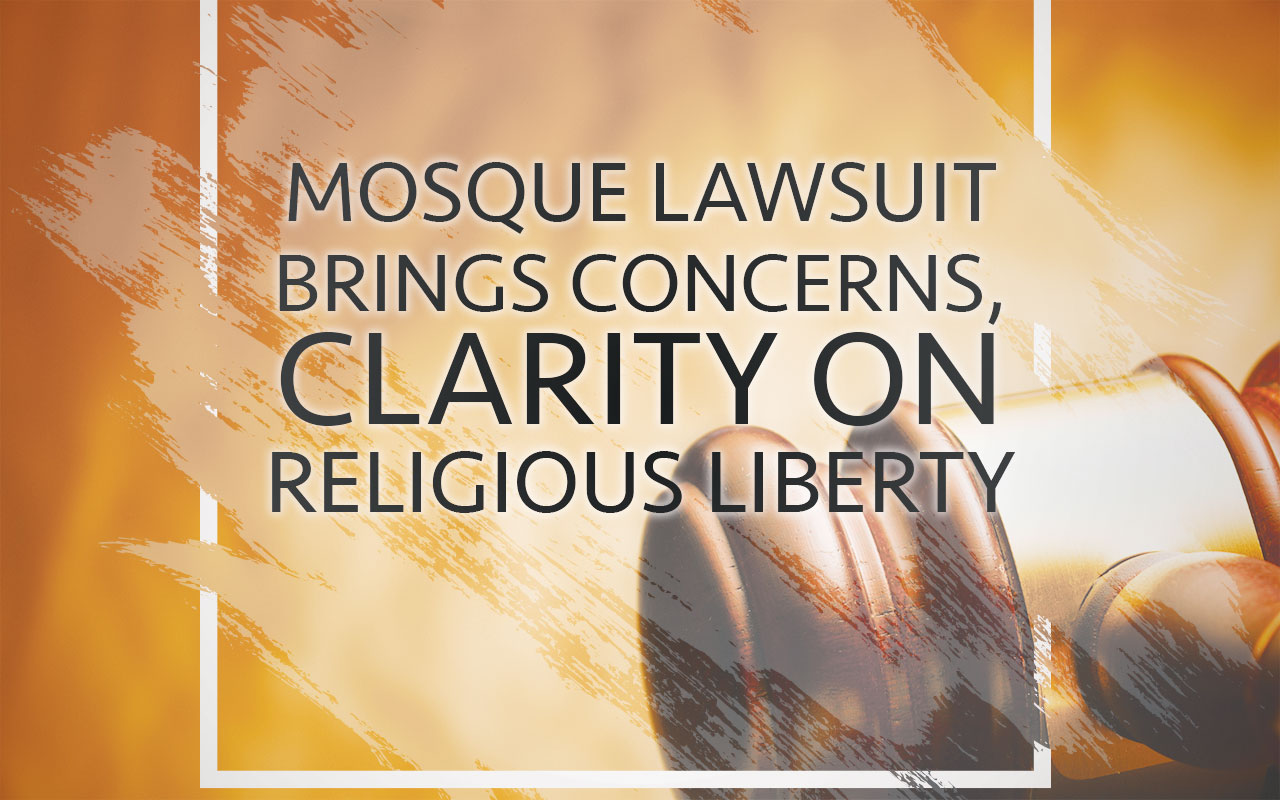 BERNARDS TOWNSHIP, N.J. (BP)—The proposed construction of a mosque in New Jersey has prompted discussion among Southern Baptists of the proper way to protect religious liberty.

On June 9, a trio of Southern Baptist professors—Jason Duesing, provost at Midwestern Seminary; Thomas White, president of Cedarville University; and Malcolm Yarnell, professor of systematic theology at Southwestern Seminary—issued an open letter deeming it “inappropriate to question whether Muslims should retain the right freely to practice their religion” even though “granting such rights to some forms of Islam might one day lead to the threatening of Christians in our worship.”

The letter (see www.BaptistMessenger.com) came in response to a June 6 editorial by Gerald Harris, editor of Georgia’s Christian Index newsjournal, who argued Islam “may be more of a geo-political movement than a religion” and may not qualify for all the First Amendment protections granted to religions. In his editorial, Harris critiqued the Ethics & Religious Liberty Commission and the International Mission Board for taking the mosque’s side in an amicus brief filed in a lawsuit seeking to have building permit denials overturned.

Meanwhile, a local pastor told Baptist Press the Muslim group behind the mosque “received the same treatment from our local planning boards that many of our churches do.” He deemed local authorities’ actions “consistent” despite claims made in the Islamic Society of Basking Ridge’s lawsuit.

Duesing, White and Yarnell, editors of First Freedom: The Beginning and End of Religious Liberty (B&H), wrote that they “agree with (Harris’) effort to inform readers of teachings within Islam that are not fully known in the public square.” But they said they “disagree” with the specific manner in which some of Harris’ concerns were expressed.

Among the arguments the professors offered:

— “We believe, as Americans, that our Constitution guarantees the ‘first freedom’ among all human freedoms, the freedom of religion with all of its benefits. For Christian Americans to question whether Muslim Americans qualify for religious freedom is essentially a question about whether all Americans are under the protection of the First and Fourteenth Amendments.”

— “We believe, as Baptists, that questioning whether Muslims deserve religious liberty is foreign to the historic Baptist understanding of biblical faith and practice.”

— “We believe, as Southern Baptists, that universal religious liberty is a nonnegotiable aspect of our denomination’s theology.”

Ultimately, they wrote, “any attempt to inhibit religious liberty will only prove to be a hindrance to reaching these precious men and women, created in God’s image, with the saving Gospel of Jesus Christ.”

/// Religious freedom for whom?

In his editorial, Harris asserted that “Muslims around the world and in our own country” have shouted “death to America” on some occasions and that mosques “often promote Sharia Law and become training grounds for radicalizing Muslims.” He quoted four commentators who have argued Islam “has a religious component” but, taken to its logical end, seeks to overcome western civilization.

That led Harris to state, “Do Southern Baptist entities need to come to the defense of a geo-political movement that has basically set itself against Western Civilization? Even if Islam is a religion must we commit ourselves to fight for the religious freedom of a movement that aggressively militates against other religions?”

Harris added, “Freedom of religion in America is designated to protect the rights and dignity of different religious communities, so they can practice their respective rites and ordinances without fear and interference. However, religious freedom for Muslims means allowing them the right to establish Islam as the state religion, subjugating infidels, even murdering those who are critics of Islam and those who oppose their brutal religion. In essence they want to use our democracy to establish their theocracy (with Allah as supreme). Their goal politically is to destroy the Constitution with its imbedded freedom and democracy and replace it with Sharia Law.”

Just as “Americans kept Communism in check during the Cold War,” Harris wrote, “will we do the same when another political ideology endangers our future?”

Harris’ editorial can be viewed www.christianindex.org.

/// Moore speaks forth for religious liberty

ERLC President Russell Moore did not mention Harris by name in a June 8 blog post, but addressed the argument that adherents of radical Islam should not be granted religious liberty.

“Religious liberty is never an excuse for violence and crime, nor has religious liberty been so construed in American history,” Moore wrote. “The United States government should fight, and fight hard, against radical Islamic jihadism. But the government should not penalize law-abiding people, especially those who are American citizens, simply for holding their religious convictions, however consistent or inconsistent, true or false, those convictions are.

“Some would say,” Moore continued, “based on their reading of the Koran, that non-violent Muslims are inconsistent Muslims, the equivalent of cafeteria Catholics. The government’s job, though, is to punish evildoers for evil-doing, not to decide who is most theologically consistent with their professed religions.”

/// A threat to all religious liberty?

The amicus brief—signed by 16 groups in addition to the ERLC and IMB and filed May 11 in a federal district court—argues Bernards Township, N.J., has “improperly applied different legal standards to a mosque simply because it is a mosque.”

This alleged discrimination, the brief stated, “represents a potential threat to the free exercise rights of each of the amici represented here and is an affront to our nation’s commitment to religious liberty for all.”

The Islamic Society of Basking Ridge has been attempting to build a mosque “for almost a decade,” according to a news release from The Becket Fund for Religious Liberty, a group spearheading the amicus brief. NJ.com reported local officials rejected construction plans allegedly because of “a lack of details regarding parking, traffic safety and buffer zones bordering the site’s residential neighbors.”

Derek Gaubatz, IMB general counsel, told BP in written comments, “While the party in this case is Muslim, the precedent handed down here in New Jersey will have a significant impact on whether churches, especially small church plants trying to gain a foothold and a home of their own in a secular place like New Jersey, can use this important religious freedom law to ensure that they have the right to build and operate a Gospel-preaching church in New Jersey.”

/// A perspective from a New Jersey local

A local New Jersey pastor who has served as president of the Baptist Convention of New York told BP the Islamic Society of Basking Ridge does not appear to have been treated differently than local Christian churches. He asked not to be identified by name because “the ISBR has filed a lawsuit and is issuing subpoenas to many of the residents who actively opposed the mosque construction.”

The pastor said in an email, “Having lived and served in this area for many years now, I have seen how difficult it can be for area churches to receive building and expansion permits from the local planning board. A few years back, I sadly watched as a local Baptist church attempted to relocate within our township only to be voted down by the planning board. The church spent hundreds of thousands of dollars only to be told that their site plan did not, and probably would never, meet all the requirements. Local residents raised even more money to defeat them.

“The same scenario played out for the Islamic Society of Basking Ridge, Inc. (ISBR),” the pastor wrote. “After countless hours of deliberation and dozens of planning board meetings, the mosque site plan was denied. Did the community speak out against a mosque being built in their neighborhood? Absolutely! The majority of residents in Bernards Township seem dead set against any new religious facility being built in their backyards. But, as noted earlier, they also rose up and adamantly opposed the relocation of a local Baptist church.

“Do I believe the religious liberties of the ISBR were violated? Well if they were, then it was true of the Baptist church as well. And I didn’t see them bring a lawsuit claiming such violations. No, the ISBR received the same treatment from our local planning boards that many of our churches do. I may not always like the planning board’s decisions related to new church construction, but at least they are consistent,” he wrote.

NJ.com reported the ISBR has spent more than $450,000 attempting to get its building plan approved by local authorities. The U.S. Department of Justice has opened a civil rights investigation concerning the matter.

During the ERLC’s report June 15 to the 2016 Southern Baptist Convention, John Wofford, a messenger to the SBC meeting and pastor of Armorel (Ark.), asked how a Southern Baptist could defend the right of Muslims to build mosques.

The ERLC’s president said it was not a difficult decision. “What it means to be a Baptist is to support soul freedom for everybody,” Moore said.

“(W)hen you have a government that says, ‘We can decide whether or not a house of worship is being constructed based upon the theological beliefs of that house of worship,’ then there are going to be Southern Baptist churches in San Francisco and New York and throughout this country who are not going to be able to build,” Moore said.

The Gospel—not just self-interest—is at stake, he told messengers.

Having a government with “the power to outlaw people from assembling together” and confessing their beliefs “does not turn people into Christians,” Moore said. “That turns people into pretend Christians, and it sends them straight to hell.

“The answer to Islam is not government power. The answer is the Gospel of Jesus Christ and the new birth that comes from that.”

Many messengers greeted Moore’s comments with a standing ovation.