Lowrey: Kidnapping 40 years ago ‘a blessing’ 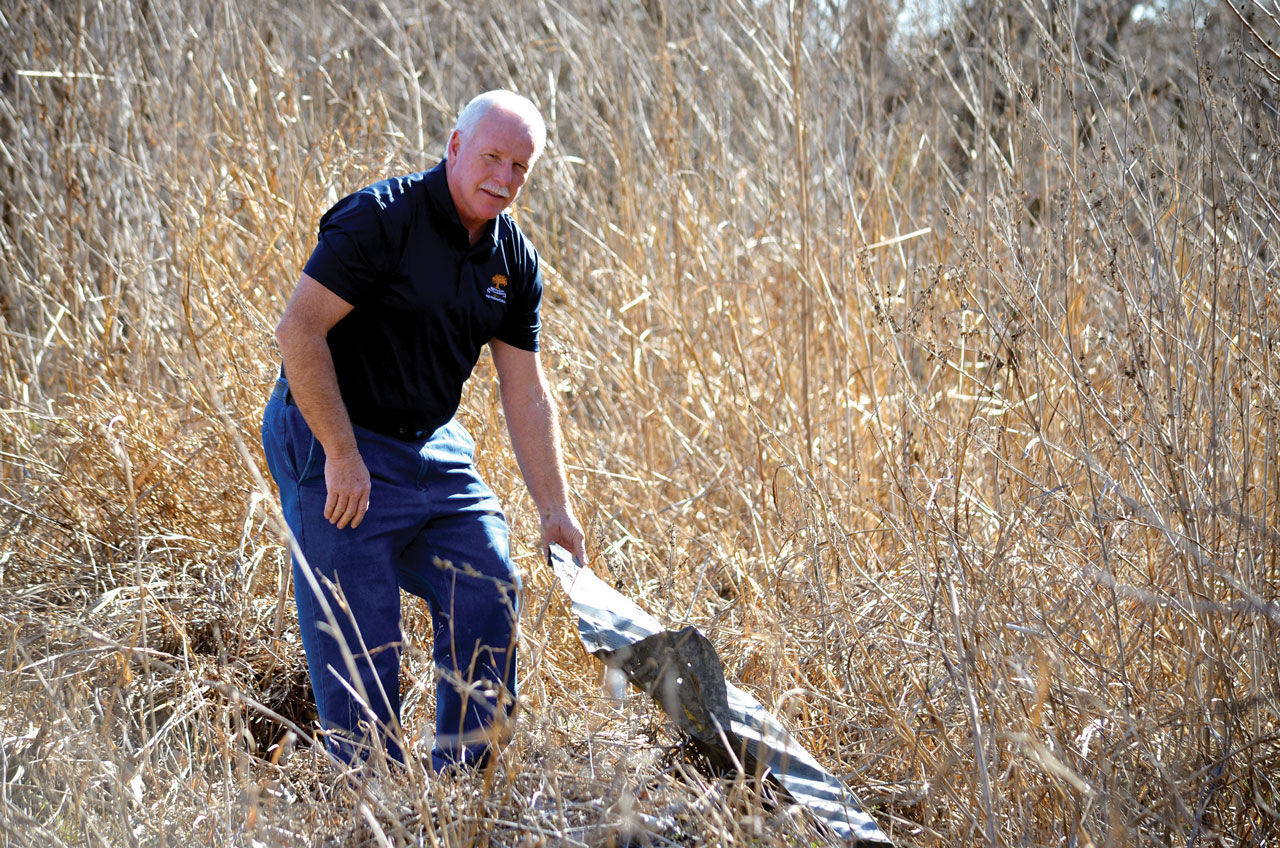 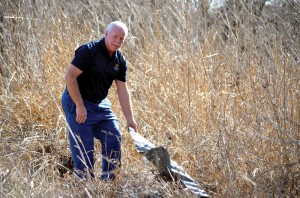 At the site where his kidnappers severely beat and shot him in the back of the head, Don Lowrey lifts an old piece of sheet metal that could have come from the shack he crawled to on Feb. 12, 1975 (Photo: Bob Nigh)

The outside temperature in Oklahoma City on Feb. 12, 1975 was in the low 20s. Don Lowrey, 24-year-old electrical apprentice, was sitting in his car waiting to go to work just before 8 a.m. when a man tapped on his window, asking for help with a flat tire.

A short time later, he had been kidnapped by three men, driven to a wooded lot, and a man with a double-barreled shotgun put it to the back of his head and pulled the trigger. By the grace of God, it didn’t fire. The gun was part of a collection the men had stolen, and the firing apparatus had been removed. Furious, the kidnapper then hit Lowrey over the head with the shotgun, fracturing his skull.

The felons then drove farther and came to the site where they finally dumped him, and as they pulled him from the trunk, Lowrey began to fight back. They all began hitting him in the face with pieces of concrete blocks and kicking him. He was covered in boot marks from his shoulders down. When they were finished, he had been kicked in the groin so many times his right hip was dislocated, and his left knee was severely injured after they grabbed his left leg and dragged him over rocks, broken glass, discarded cans and briars to an outhouse behind a nearby abandoned shack.

They propped him up in the outhouse, one placed a pistol against the back of his head and fired a round into his skull, leaving a small burn pattern around the entrance wound. Assuming he was dead, they returned to his Buick, and at 2 p.m. that day, robbed the Nicoma Park State Bank of $6,655. 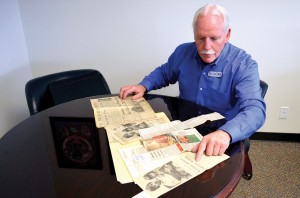 Lowrey looks through newspaper clippings about his ordeal 40 years ago from a file in the Baptist Messenger office. (Photo: Bob Nigh)

Both eyes swollen shut, Lowrey had a broken nose, broken left jaw, smashed right cheek and the .22 caliber bullet lodged in his skull, in addition to his fractured skull, dislocated right hip and left knee injury.

He lost an unimaginable amount of blood. Trying to find warmth and safety, he began crawling towards the shack, which was only about 50 feet away. FBI agents told him later they found three pools of blood on his trail where he apparently had passed out as he struggled to reach the shack.

He was finally rescued three days later after a passerby spotted his leg moving through the window of the shack and called police. He attributes him being found to the faithful prayers of the members of his church, who began a prayer chain the evening he was kidnapped.

Lowrey’s almost unbelievable ordeal is outlined in his book, I Didn’t Have A Prayer, But That’s What Saved Me, written in 1991 and updated with an Epilogue in 2007.

Today marks the 40th anniversary of what Lowrey has come to call “his greatest blessing.”

Lowrey explains it in his book: “It was during this period that I made a near-fatal request. I determined in my heart that I could not truly sing this song because I wasn’t much of a witness so I prayed, ‘God, please grant me a testimony ‘. . . . God allowed my prayers to be answered. I don’t believe in coincidence. It happened only six weeks after I prayed my prayer and sang my song.”

“Things are going well now,” Lowrey said recently. “At the time, when somebody was hitting me in the face with a brick, I wasn’t thinking, ‘God, You know, this is just exactly what I need,’ but 40 years later, I still have a lot of opportunities to share my testimony, and I have handed out about 27,000 copies of my book.”

“I keep about 1,000 copies on hand because I never know when I’m called to go speak,” Lowrey said. “I figure that every book I have shared with people has been read multiple times, too. I just look for opportunities to share with people. I probably have given away as many book as I have sold, but it works out because I always have enough money to pay for the next printing before it’s done, so God provides.

“There’s also a Don Lowrey Book Fund at my church people can contribute to. It seems like every time a printing run is due, there’s some money in there to help pay for it. And, when I go to schools, kids don’t bring or have money, but I always give them a book if they want one.”

Lowrey retired from electrician’s work three years ago. And despite his severe injuries, he also had a long career as a high school sports official, officiating basketball for 36 years, football for 32 years and baseball for 12 years.

“I did a football state championship in the fall of 2013—my last game—and worked some regional and district basketball games, then I gave it up,” he revealed. “I still do a lot of Fellowship of Christian Athletes (FCA) speaking  and sometimes do supply preaching at churches and share my testimony.”

Nine years ago, he earned an associate’s degree in ministry from the Oklahoma Baptist University satellite program in Oklahoma City.

Alive now almost 15,000 days since his horrific attack, Lowrey says God has given him a remarkable ministry, and all he suffered through “was worth it.”

Looking at him, it’s hard to discern any lasting damage to Lowrey’s face, even though his snow-white hair has retreated from his forehead. The scars are subtle, despite him having more than 500 stitches in his head and face after surgery.

“I don’t have any eyebrows,” he states matter-of-factly. “When the surgeons cut through my forehead to slide the facial bones back together, they told me the eyebrows wouldn’t grow back through the scar tissue.”

In his mouth, which frequently is covered with a smile, only his natural four front teeth remain on the top, and the back molars are gone on the bottom. He wore dentures for more than 35 years, then had dental implants put in about five years ago.

“But, I feel like God healed me completely physically. You know, I have sore knees, but it’s never prevented me from doing anything I wanted to. It never limited me physically; like my coaches told me, ‘if you can’t play with pain, you can’t play,’” he avowed.

“I like to say God also healed me financially, because nearly every penny of my hospital bills were taken care of by gifts from people, most of whom I didn’t know. They’d pass the hard hat out on jobs I worked and bring in $500-$700. Later, I got letters from people all over the country who had read about me, and the letters had money in them.

“But I also think He took care of me spiritually, because when I got home from the hospital, I was so grateful to be home that I really didn’t have any fear or trauma. I used to joke that some people might think that I have some ‘Dain Bramage,’ but then I have a bullet in my head, so I have an excuse for it.

“God just never caused me to have any concern for my well-being. I was in the hospital less than a week, off work for only about five weeks, and He has given me such a freedom from that.”

And, even though the culprits never were captured, Lowrey is at peace, even when he shares his story in prisons.

“Sometimes I get to go to prison and I tell the guys, ‘You know, they never did find the men who kidnapped me, so I may be talking to you right now. If I am, you have been forgiven a long time ago. God never put that burden on my heart. I never felt anger for them.”

His father, B.H., wasn’t so forgiving, however.

“Now, my dad didn’t feel the same way, and I understand that,” he said. “When he came up to Oklahoma City from Arkansas, where he lived, he brought his rifle and a trunk full of ammunition and told the FBI, ‘I’m a pretty good tracker, and you better hope you find them before I do.’ I understand that as a parent protecting his child.

“Dad died in 1989, wishing that he could find them. It always bothered him that they were never found. But, as he got older, he was at peace with the Lord. My brother, Ron, died of cancer at age 57 in 2004, and I remember being with him in Colorado during the last week of his life. He talked about going to Heaven. He came to know the Lord after my kidnapping.”

Lowrey said he plans on “keeping on doing what the Lord has me doing until He leads me to do something else. I’ll be 65 in March. I love to preach whenever I get the opportunity or share my testimony.”

But before that, he finally will have his damaged left knee replaced sometime in March.

Daily, he clings to Rom 8:28, which says, “We know that all things work together for the good of those who love God: those who are called according to His purpose.”

“Rom. 8:28 even includes somebody hitting you in the mouth with a brick,” Lowrey insists. “Here it is 40 years later, and I think back on it and it’s an incredible story. It happened to me in that God healed me so completely, and has given me so many opportunities to share it. I look back on it and I thank God it happened. I don’t want any re-enactments, but I just shake my head and admit, ‘God, I guess You knew what You were doing!’