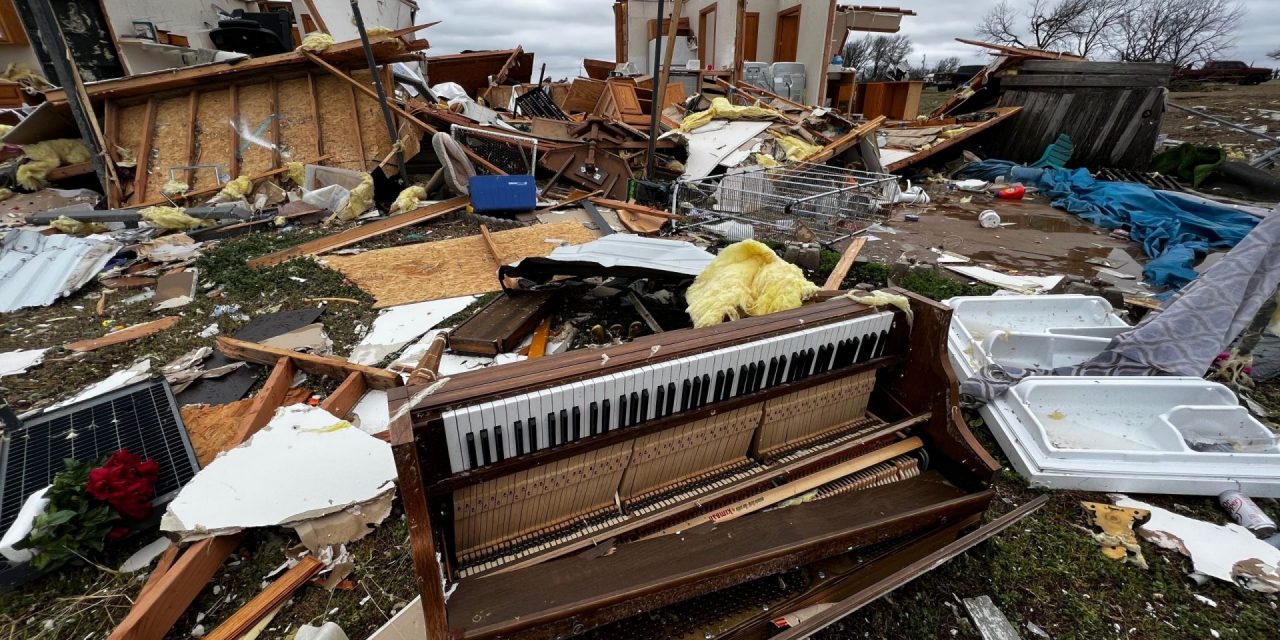 KINGSTON (BP)—Keith Rogers planned to celebrate his 65th birthday preaching to Kingston, Texoma Southern on March 27. Despite a tornado that destroyed the building and his home days earlier, he was still able to do so. 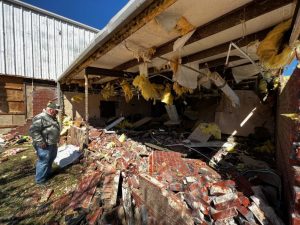 Pastor Keith Rogers looks at the damage to Texoma Southern Baptist Church from a March 21 tornado. Photos by Jeremy Rogers

A fast-moving storm through this area in southeastern Oklahoma on March 21 destroyed or heavily damaged most of the buildings on the church’s property. Built in 1972, the church had added other sections over the years including a gym, education space and the parsonage where Rogers and his wife, Cindy, had lived since arriving in September 2006.

“We had been seeing on the news that storms were in Texas,” Rogers said. The forecast led to them calling off a WMU meeting, and he arrived home to threatening skies.

Cindy had been watching the weather reports. Rogers went into the bedroom for a moment and while there, turned on a local news channel.

“They mentioned that the tornado warnings had expired, so I went back into the living room to tell Cindy, but then I noticed the winds pick up and get stronger. I thought they were downburst winds, but this was different,” he recalled.

A sense of danger hit and Rogers told his wife to run for the hallway.

“I yelled, ‘Bathroom!’ and we went in. Right when we shut the door, we could hear the glass and everything breaking,” he said.

Within 15 seconds their roof was gone. Two minutes beyond that the storm had passed.

A National Weather Service report confirmed that at approximately 6:16 p.m. a tornado crossed the Red River and into Marshall County, quickly intensified into an EF-2 and touched down near Texoma Southern. Shortly thereafter it weakened and lifted off the ground.

Insurance adjusters are still evaluating the facilities, but to the regular observer, it’s a total loss. The tornado peeled off the gym’s roof and took the fellowship hall along with its 125 chairs and 25 tables, Rogers said. The damage extended to the office space and classrooms.

Oklahoma Baptist Disaster Relief descended on the area and offered its help to those in the Kingston/Madill area. Todd Fisher, Oklahoma Baptists’ executive director-treasuere and several others left a gathering at Falls Creek Conference Center 60 miles away to give their support. Gary Dempsey, director of missions in Johnston-Marshall Association, joined them on-site.

Small victories came despite the destruction. In the mayhem of the storm, Keith and Cindy Rogers’ two dogs had gone missing. Their Maltese, Harley, was located in the bedroom closet. Benson, their miniature Yorkie, was found wandering about 150 feet from the house.

On March 27, Texoma Southern members went to the building and shared their appreciation with those cleaning up the destruction. Then they gathered at a nearby community center. They sang “Victory in Jesus,” “Heaven Came Down” and “Serve Him with Gladness” acapella. Geraldine Hodges, 75, presented “I’m Feeling Fine” from memory during the offering. Rogers preached from Galatians 5 for the message “Is It About You or Jesus?”

The sky was sunny, and the weather was warm, approaching 80 degrees. It gave the air of a new beginning.

“Things went well,” Rogers said. “We announced there would be a leadership team assessing damages. There’s still a lot of work to be done in the community. But we had a good day in the Lord.”