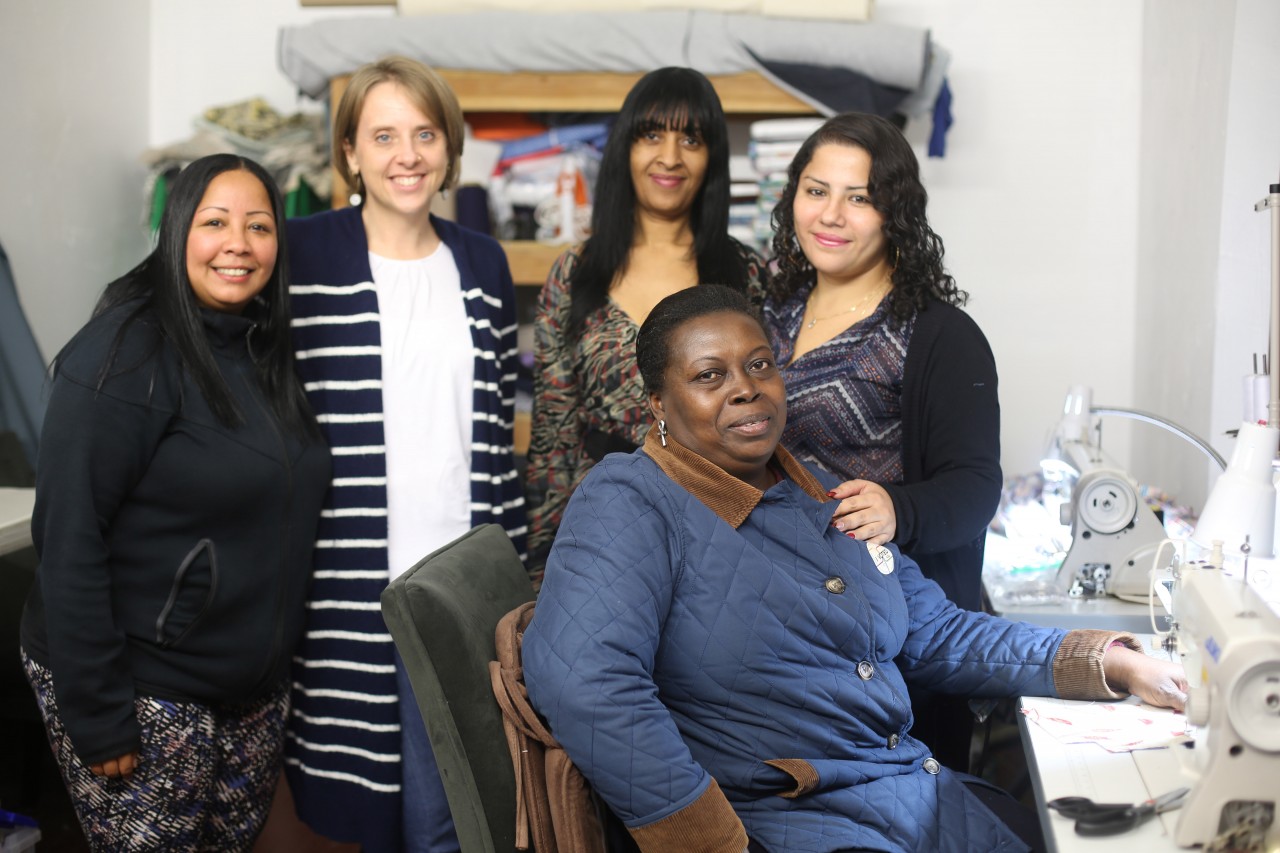 NEW YORK CITY—For Carmen, Diega, Emily and Johanna, serving as WorldCrafts artisans with Graffiti 2 Works in New York City’s South Bronx has made a lasting impact in their lives. The same is true for Gloria, and her mother, Maria, who are improving their English skills through one-on-one tutoring and mentoring at Graffiti 2 Works’ Adult Learning Center. 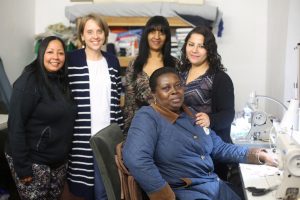 Both the WorldCrafts fair trade micro-enterprise and the Adult Learning Center, affiliated with the Christian Women’s Job Corps program of National Woman’s Missionary Union, are coordinated by Kerri Johnson, the founding director of Graffiti 2 Works. The ministry is part of Graffiti 2 Community Ministries which has had a presence in the Bronx since 2005.

“I grew up in WMU,” Kerri explained. “Most everything I do in ministry here in the South Bronx is a reflection of Woman’s Missionary Union.” Besides learning about missions through her involvement in WMU’s Mission Friends, Girls in Action and Acteens programs in her home church in West Virginia, she has served in recent years as state WMU president for the Baptist Convention of New York as well as serving on the National WMU Executive Board and WMU Foundation Board.

From small-town USA to NYC

Kerri and her husband, Josh, along with their children, Paige and Noah, are transplants to New York from their hometown of Princeton, W.Va. 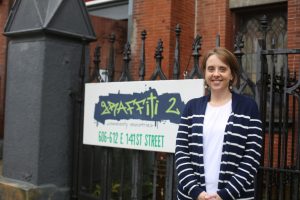 Kerri Johnson is the founding director of Graffiti 2 Works, part of Graffiti 2 Community Ministries in New York City’s South Bronx. She and her husband, Josh, natives of West Virginia, have served at Graffiti 2 since 2011. (WMU photo by Pam Henderson)

The Johnsons were leading mission trips for college students to serve at Graffiti 2 at the same time that God was dealing with them about their personal call to missions.

While “small-town USA vs. New York City is extremely different,” Kerri said that within a few months, their family had relocated to the Bronx as Mission Service Corps workers. Josh has served at Graffiti 2 since 2011 as director of youth and recreation. Kerri, who initially served as the ministry’s office manager, said she sensed a burden from God to start Graffiti 2 Works a few years later to help meet practical needs in their neighborhood.

She initially launched the WorldCrafts effort with very limited sewing skills and experience. As she was evaluating how the program needed to be revamped, she struck up a conversation at a neighborhood farmers market with Diega Cordova, the mother of a student in Graffiti 2’s after school program.

Diega “said she was looking for a job in home health but she was really a seamstress,” Kerri recalled. “Right from the start, I knew God had sent me Diega. … It was just God’s perfect timing.”

Diega, a native of Honduras, has been living in the United States for almost 30 years. As Kerri shared her vision for a WorldCrafts artisan group, Diega quickly agreed to join the effort.

Noting that she began sewing at age 16, Diega was able to step in, streamline the sewing process and train new artisans who started with no sewing experience. Teaching her new co-workers how to sew aprons, bags, purses, lanyards and other products to market and sell through WorldCrafts, Diega said, “I was very happy that they came and we joined to work together. It’s a wonderful program not only for us, but for the community.” 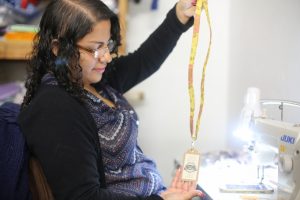 Johanna Chavez displays a lanyard she sewed for WorldCrafts as part of her work through Graffiti 2 Works in the South Bronx. (WMU photo by Pam Henderson)

According to Johanna, “I had no experience at all whatsoever” when Kerri invited her to join the WorldCrafts team. “When I got here, Diega taught us. We would just grab any fabric and start practicing on it. Diega was always there if I needed help. We’re all a family and we look after each other.”

As a result of her work with WorldCrafts, “I was able to provide for my kids,” Johanna emphasized. She said she also is “learning more about the Bible and how to have a better relationship with God,” adding that “learning about God has helped me and my kids.”

Emily said her involvement in WorldCrafts “gives me purpose to have something to do and I have made great relationships with these girls. We are like more than friends; we’re family.”

Carmen’s involvement in the close-knit WorldCrafts team echoes that of her co-workers. “I learned how to sew. I love it. It’s a good trade to know,” she pointed out. “Working with the women is great. We are our biggest supporters. We’re united here with each other.

“I feel more grounded ever since I started coming to Graffiti 2,” Carmen added. “They taught us how to pray and have faith. I heard a lot of things about the Bible I didn’t know before. I had a lot of questions and they answered the questions that I had.”

As the women work together in close quarters on a variety of sewing projects, “I just love it here,” she concluded. “Graffiti makes a big difference in the community. They invite anyone in and they help everyone.”

“It’s interesting just to do life with this group of women,” Kerri affirmed. “That’s basically what we’re doing to get to know them and their kids” while also providing “the connection to church and the connection to introducing them to Jesus.” 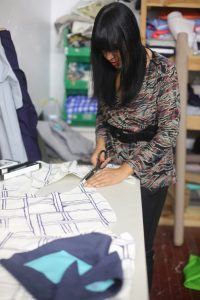 In addition to supervising the WorldCrafts artisans, Kerri leads the Adult Learning Center program. Directing the only certified CWJC site in both the city and state of New York, she coordinates efforts related to literacy, English as a Second Language, high school equivalency training and more.

For Gloria Aguilar, “I’m here learning how to read and write. I get with Kerri every Monday at 1 o’clock and we do spelling words and some writing.”

Before being tutored at the Adult Learning Center, “I was afraid to look for a job. I was afraid to show them that I didn’t know how to write and read,” Gloria acknowledged. “Now I’m able to

do it since I’ve been with Kerri and I open myself more.” She said another major benefit of the program is that it has allowed her to help her youngest daughter with her homework, including writing and reading assignments.

Kerri also is tutoring Gloria’s mother, Maria Pardilla, providing her training in English as a Second Language. With her daughter serving as her translator, Maria said, “It is very important to me to learn English as a second language because I can communicate more.

“I love the community of Graffiti Ministries because I have seen the progress of my grandkids while they have been here and have learned a lot,” she added. “I am very happy, very proud to have them in our community.”

Kerri said Graffiti’s primary ministry philosophy involves “meeting the need first in whatever that need might be; just loving people for who they are, where they are.”

“That could be teaching them job skills or teaching them to read or it could just be sitting down and having a meal with them and making them feel like they’re a person and not judging. That’s not up to us,” she said. “We are to introduce them to Jesus and guide them in that way and follow up with the discipleship.

“The relationships are primary,” she added. “No one’s going to listen to what you have to say about anything eternal if they’re hurting or they’re hungry or they’re lonely.”

Andrew Mann, executive director of Graffiti 2 Community Ministries and pastor of Graffiti 2 Baptist Church, said many neighborhoods in the South Bronx struggle with such challenges as education, employment, family dynamics and violence. 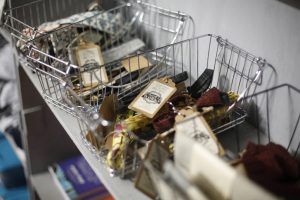 Lanyards and other products sewn as part of Graffiti 2 Works’ WorldCrafts ministry are displayed at Graffiti 2 Community Ministries in the South Bronx. (WMU photo by Pam Henderson)

“Kerri is very much compassionately caring for the adults that are part of Graffiti 2 Works but also their families,” Andrew said. “She does that through Graffiti 2 Works but also through a thriving WMU ministry on the church side of things. She is able to bring the women together around the study of missions and share the gospel in that way too.”

Reflecting on her ministry opportunities in the Bronx through Graffiti 2 Works and WMU, Kerri said, “I feel a lot of times there is no reason that I should be where I’m at right now … but God is blessing the obedience.

“There are times when it’s just work. It’s very monotonous, especially in the dead of winter,” she candidly admits. “And then there are days when you are like, ‘Oh, my goodness. How do I get to do this? How do I get to be here? How am I blessed that God gets to use me in these ways?’”

Urging fellow believers to actively pursue their own call from God wherever that leads, she concluded, “We aren’t doing anything that anyone else can’t do anywhere else in the world. We are trying to just focus on loving people.” In the South Bronx, that commitment is making a a life-changing difference one person at a time.