IMB pledges to ‘be a leader’ in abuse prevention 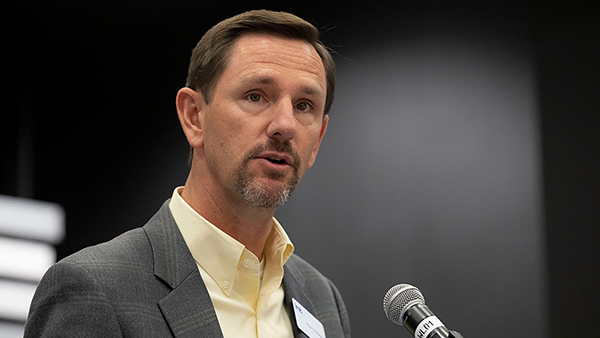 RICHMOND, Va.(BP) — International Mission Board trustees heard recommendations Wednesday (May 22) from the firm conducting an external examination of IMB’s handling of past allegations of abuse and sexual harassment and IMB’s present policies and practices. 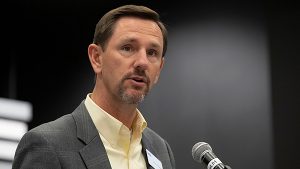 International Mission Board President Paul Chitwood responds to an external examination of IMB’s handling of past allegations of abuse and sexual harassment with an apology to victims and a pledge for the future. IMB trustees heard the report Wednesday (May 22) during their board meeting in Richmond, Va. IMB Photo by Chris Carter

IMB President Paul Chitwood responded immediately with an apology to victims and a pledge for the future.

Kathryn Nash, leader of the examination task force from Gray Plant Mooty (GPM), presented findings from the firm’s external examination during a trustee plenary session Wednesday. In her statement, Nash reviewed the scope and process of the firm’s examination and various recommendations resulting from the work. 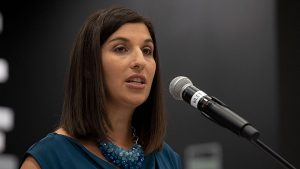 “IMB has an opportunity to be a leader within the Southern Baptist Convention in prevention and response efforts,” Nash said. “GPM’s recommendations will enable IMB to improve its efforts to protect its personnel and their families and those who interact with its personnel and their families and to effectively and appropriately respond when there is an allegation of child abuse or sexual harassment (including sexual assault).”

Chitwood responded to the presentation from Gray Plant Mooty with an acknowledgement that “churches and mission agencies are not exempt from evil and sin” and the imperative that the IMB, the Southern Baptist Convention and Christian believers altogether must demand the highest standards in abuse prevention and response.

“On behalf of the International Mission Board, to any person who has been affected by these actions of anyone associated with IMB, I offer a heartfelt, sincere apology that these injustices have occurred in your lives,” Chitwood said.

“I recognize that some people were harmed by the way IMB has responded to these situations throughout our 174-year history and for that, on behalf of the IMB, I apologize,” he said. “I commit to you today that we will do better in the future.”

Chitwood noted IMB’s trustees and senior leaders already are at work to implement the recommendations presented by the examination. IMB is “committed to making the changes necessary to better prevent instances of child abuse and sexual harassment (including sexual assault), and to better care for victims while holding perpetrators accountable,” he said. 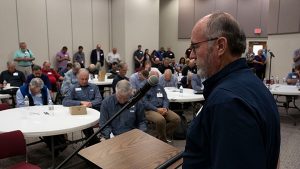 David Beauchamp, an International Mission Board trustee, prays in response to an external examination update trustees received during their May board meeting in Richmond, Va.. IMB Photo by Chris Carter

He called on members of churches in partnership with the SBC to partner “in diligently demanding the highest standards” to respond to incidents of child abuse and sexual harassment (including sexual assault), including seeking trauma-informed care for victims. Beyond the SBC, he called on every believer in Jesus Christ to join in the commitment to “absolute excellence in these areas as we represent the global church.”

In his response, Chitwood reiterated that the IMB strongly encourages any church, entity, or other employer who is considering working or partnering with a former IMB personnel to contact IMB at references@imb.org to obtain a reference on that individual “so that we can do our part to help you make wise and informed hiring decisions.”

In July 2018, then-IMB President David Platt called for an external examination of IMB’s handling of past allegations regarding child abuse and sexual harassment — including sexual assault — as well as a review of IMB’s policies and practices. IMB trustee officers interviewed numerous potential outside investigators for the task and selected Gray Plant Mooty, headquartered in Minneapolis, Minn., to conduct the examination. After Chitwood’s election in November 2018, he affirmed his commitment to the examination. See related Baptist Press story.

“On behalf of the trustees, I’m grateful that we walked through this process,” said Lisa Lovell, a trustee officer who represented IMB on the task force. “One instance of abuse is one too many. We’ve learned so much, and implementing the recommendations will help us improve our prevention and response efforts.”

IMB encourages anyone who has been a victim of abuse by its personnel to report it to authorities. In addition, victims can contact IMB on a confidential hotline at (866) 292-0181 or email advocate@imb.org so that IMB can provide care to that victim and take appropriate steps to ensure the safety of others.