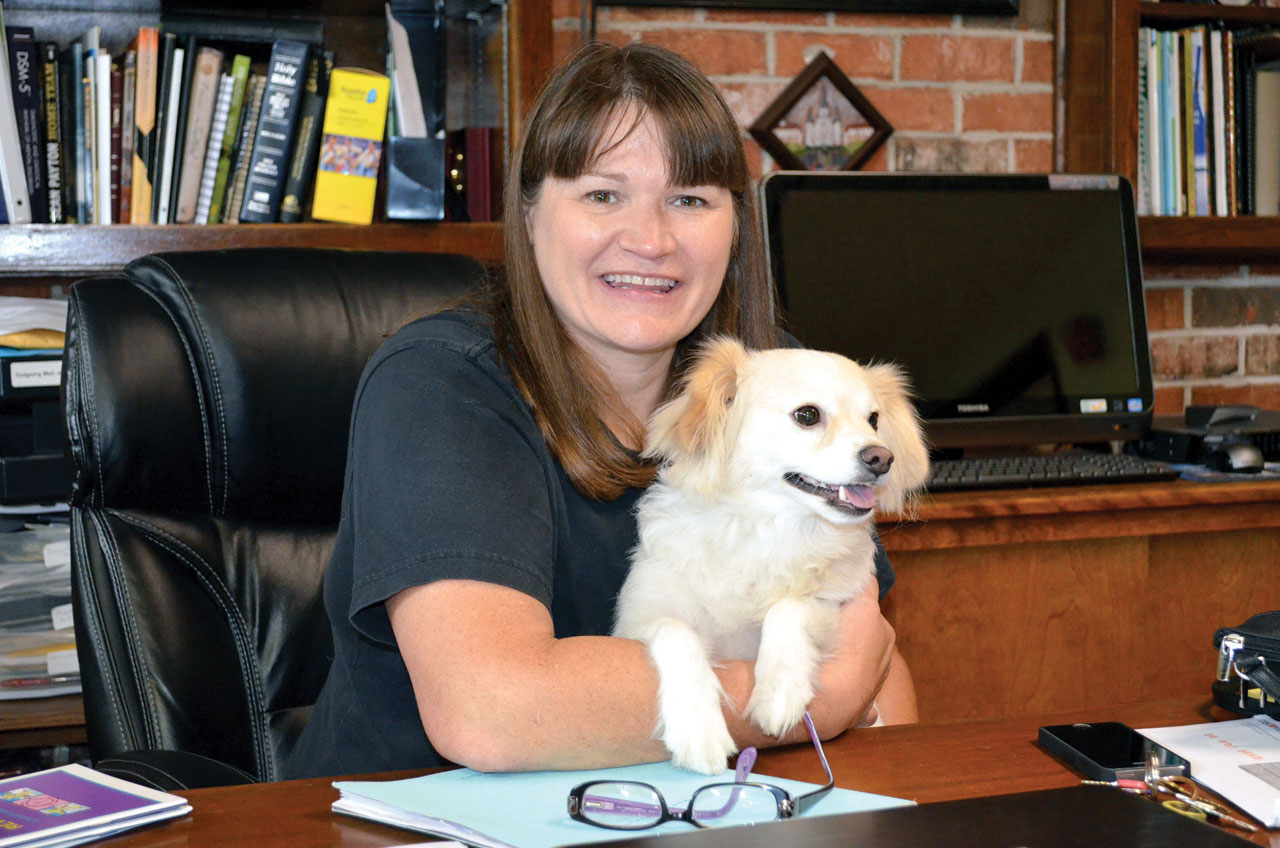 Bennett shows off one of her favorite mementos of the aftermath of Hurricane Katrina—a cross carved into a portion of a tree trunk by a member of an Oklahoma chain saw crew, and then signed by all of the members of the crew—to Baptist General Convention of Oklahoma Disaster Relief Director Sam Porter.
(Photo: Bob Nigh)

EDITOR’S NOTE: Aug. 29 marked the 10th Anniversary of the landfall of Hurricane Katrina along the U.S. Gulf Coast. In this issue, the Baptist Messenger presents Part 2 of a three-part series: “Katrina at 10,” featuring reflections by three New Orleans area leaders assisted by Oklahoma disaster relief volunteers after the storm.

NEW ORLEANS, La.—Sam Porter is visionary, but never in his wildest imagination did he think Oklahoma Southern Baptist disaster relief volunteers would ever become involved in mud-out/flood recovery work.

That was before Hurricane Katrina slammed into the Gulf Coast on Aug. 29, 2005, and Porter, the Baptist General Convention of Oklahoma’s (BGCO) disaster relief director, had an epiphany.

“We started doing mud out and flood recovery here in New Orleans,” Porter said Aug. 15 while he drove through the streets of the Crescent City. “I just never thought we would do it because there would not be a need in Oklahoma. Then in some of our meetings here, I asked what the area of flooding in New Orleans was, and someone said 100 square miles. Just four years before that, the blast site of the Twin Towers in New York City covered 60 acres, and it took nine months to clear the debris away. Here, you had 100 square miles. The thought of that was overwhelming. I knew we couldn’t walk away from that, so that’s when we started being involved in mud out.”

But, the mud-out work was in the future; the immediate need was feeding victims of the storm and first responders. The Oklahoma feeding unit pulled into the parking lot of Baton Rouge, Florida Ave. before the storm’s remnants had even passed over.

“We were in Baton Rouge for two weeks until we could cross the bridge and get over into Belle Chase in the southeast corner of New Orleans,” Porter said. “We were the first feeding unit to get set up at Florida Blvd. That was where the majority of people came. Most of the feeding units were staged at East Texas Baptist University in Marshall, Texas, waiting to get in.

“We got set up and began cooking the 20,000 meals we brought with us from Oklahoma.”

Meanwhile, Kay Bennett, director of the Baptist Friendship House in New Orleans, was responsible for four families of homeless women and children who were living at the 24-bed, transitional housing facility located at 813 Elysian Fields Ave.—about four blocks north of the French Quarter—when the storm approached the city. The ministry is supported by the North American Mission Board and the New Orleans Association.

A native of Kokomo, Miss., Bennett knew she had to get her clients out of harm’s way.

“I evacuated the four families we had to my home church in Mississippi, and the storm came right over us,” she said. “So, I evacuated them from there to Columbia, Miss., First. The sewers then backed up in Columbia, and I found out there was a bus coming from the Red Cross shelter in Hattiesburg, so I put them on that bus.

“I was running out of gasoline; you couldn’t buy gas for hundreds of miles. One of my interns met them at the shelter, and they all wound up getting jobs and homes there, so it all worked out for them in the end.”

Bennett finally got back to Friendship House around Oct. 1, a few days after Hurricane Rita had hammered the Gulf Coast on Sept. 24.

“It was a ghost town,” she remembered. “I had never seen the city like that. All of the electricity was out. When it got dark, it was really dark. I had to pay $10,000 to get a line run to get power back on.”

She was relieved to see that the Friendship House had not been looted or damaged by vandals while she was gone.

“People knew we were there to help them, and so nobody would ever mess with things here,” she said. “But, everything else around here was ransacked.” 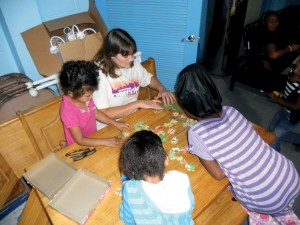 Bennett works with client children in the Friendship House to put together a puzzle.
(Photo: Provided)

For the rest of the year, Bennett ministered to the few people who came back to the area—all of whom were classified as homeless then. Fifty-five Mississippi River levee breaches led to 204,000 homes in New Orleans being either damaged or destroyed, and more than 800,000 residents displaced. While most buildings and homes were intact,  it was estimated that 80 percent of all structures in Orleans Parish and surrounding areas had extensive water damage. That included the Eighth Ward, in which the Friendship House is located.

“We rotated teams in and out for about 17 months, and to do that, we needed a place for the teams to stay,” Porter said. “We needed housing, and Kay had housing with no one to stay in it; it was a match made in Heaven.”

“What worked so well, was when we got past the feeding teams and the chain saw units and got into the mud-out work, whoever’s house it was, the families could come here and stay with the disaster relief teams while they were cleaning out their house,” Bennett said. “That was so therapeutic, because they were able to bond during that time.

“When we took that family to the site, most of the time, it was the first time they had been back to their home. So it was a great opportunity for our chaplains from Oklahoma disaster relief to be there with them. It made it easier for them.

“Every evening, they went through a debriefing process, and I think that was one of the greatest things for that family to be here with the mud-out team while they did that.”

Bennett, who later used her experience to earn a Doctor of Ministry Degree in Counseling Psychology from New Orleans Seminary in 2008, said the impact of Oklahoma Baptists in New Orleans after Katrina is immeasurable.

“I’m not sure what I would have done without you guys, because I couldn’t have asked for folks to be any better and to be equipped to deal with a disaster,” she said.

“You can always go down in history knowing that you helped save the City of New Orleans in some respects because you were here from the beginning when we initially needed trees cut off the streets and off houses for people to even get back in, and then you were here when I stood in line for water and ice and MREs and all of that kind of good stuff.

“I had always done ministry in regards to the homeless coming to me getting those kinds of things and I found myself in the same boat, and so, to get to experience the other side of it was difficult in some respects. But, then, when you guys came in, you made that a whole lot easier because you care about people. You came in ministering to the whole person. Sure, you were here to cut trees or feed people or mud-out and gut out homes and then to rebuild homes, but the most important thing you did is you helped to rebuild lives.

“That’s the change you made, because we foster resiliency sometimes, and you guys do that through disaster relief; you know what it’s like to be able to sit down with someone and walk them through a process of the fact that everything they worked their whole life for was set out on a street, and mostly what they could save would fit into a small box. But you were there to debrief, to counsel, to pray with people, to work with them, building that relationship with them so healing could take place.

“In that respect, ministering to that spiritual need, because the spiritual need is actually going to get us through something. When that need is met, that physical and emotional stuff, you can handle that, if you know you have hope and help through Jesus Christ.”

Today, Bennett and the Baptist Friendship House staff have extended their ministry to help combat human trafficking in New Orleans, which lies along I-10.

“The FBI rates I-10 as the highest rated corridor for human trafficking in the United States,” Bennett said. “Not only does it run through New Orleans, but it also runs from Florida to California. We have been working to get people to adopt every mile of the highway between Florida and California to pray for, and the coolest thing is prayer opens people’s eyes and I’m getting calls all the time. Some are starting shelters or truck stop ministries along the highway to make a difference.

Bennett works closely with the FBI and Homeland Security on the human trafficking issue, and graduated from the FBI’s Citizen’s Academy in April 2014. She travels speaking and educating on issues regarding poverty, homelessness, domestic violence, substance abuse and human trafficking.

“I get to see God show up and show out every week in New Orleans,” she concluded. “God makes good things come out of bad; He always does.”