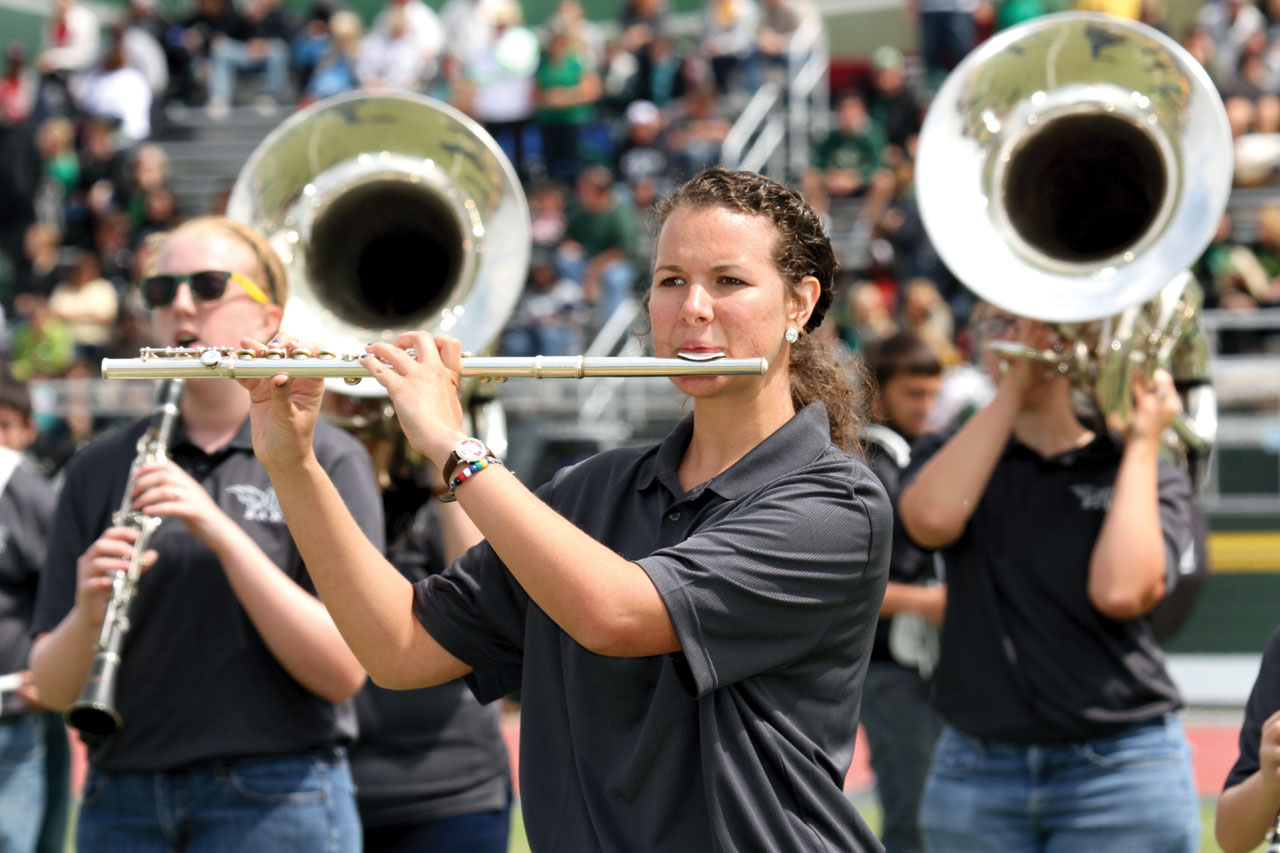 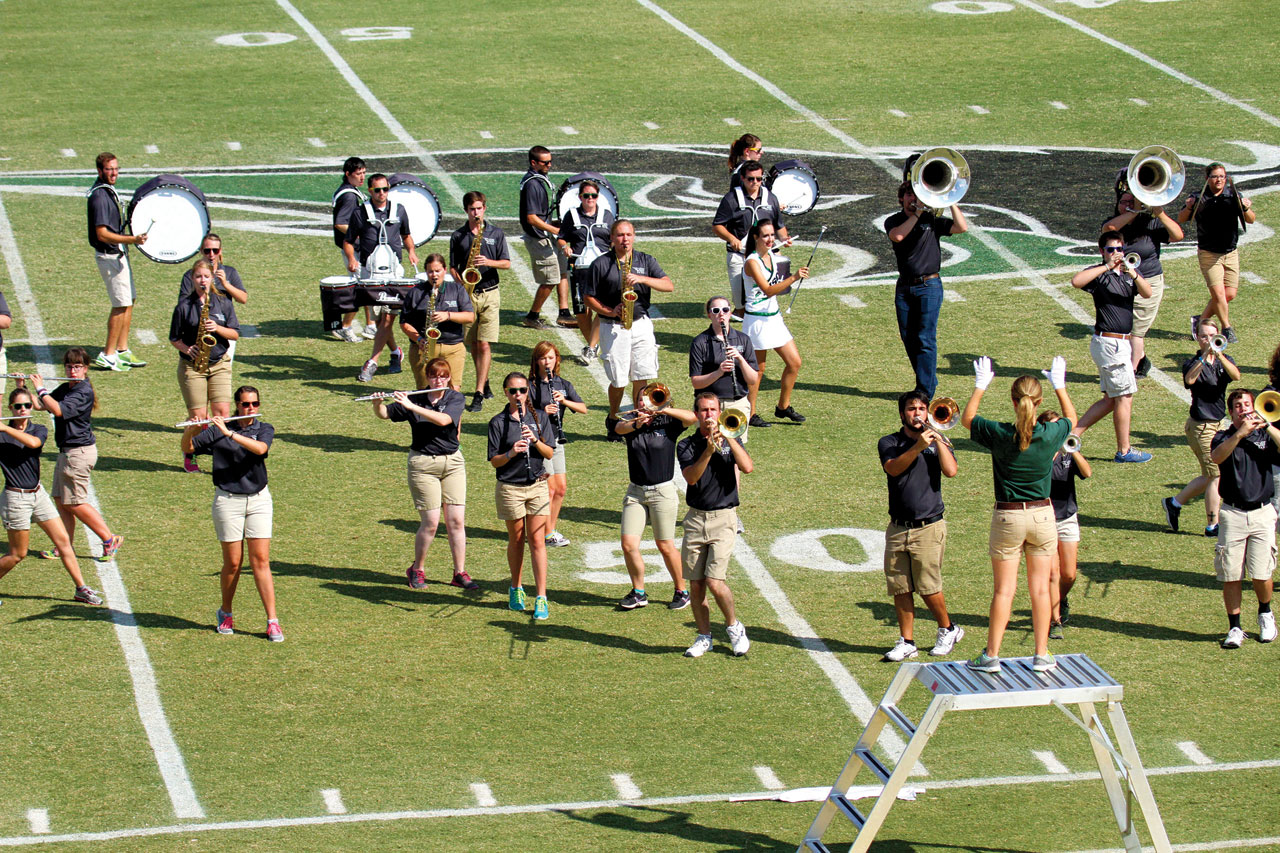 SHAWNEE—It’s 5 p.m. at Oklahoma Baptist University (OBU). Classes are under way. Summer break has yielded to studying and exams. The air is beginning to cool. The bells of Raley Chapel strike five times, then ring out great hymns of faith. In the distance, sounds of whistles, tackles and shoulder pads echo from the football practice field.

But if you listen closely, another sound fills the air . . . a sound once foreign to the OBU campus,  but one that spreads spirit around Bison Hill. The sound of drums, tubas, clarinets and other musical instruments. The sound of the OBU marching band. The sound of the Bison Brigade.

The OBU marching band is entering its second season on the field, just as OBU athletics transitions to its first season as a member of the Great American Conference, and its first season of competition against NCAA Division II opponents.

Ryan Meeks, instructor of music and director of bands, leads the Bison Brigade.

“Marching band provides much more than just an opportunity to continue playing music. These students continually push the limits with their relentless work ethic,” he said. “They truly understand what it means to be a part of something bigger than themselves.”

Meeks is excited to build on the momentum and successes of their first season back on the field last fall.

“Things went really well last year,” he said. “I would say the biggest success is the sense of community that has emerged. My student leaders have really worked hard to build an environment that balances hard work and high expectations with a deep concern for the well-being of every student member.”

The band continues to raise funds for the purchase of full Bison Brigade marching uniforms. This season, they will continue to wear OBU polo shirts and khaki shorts or pants until funds are available to purchase the full marching uniforms.

Junior education major Kathleen Houston, from Fort Worth, Texas, begins her second season as drum major, a role last held more than 70 years ago by renowned pastor John Bisagno. She began as a member of the pep band two years ago as a freshman, before it transitioned to marching band.

“As a leader in the program, it is imperative that I move outside of my comfort zone to effectively reach every member in the way they need,” she said. “Our director emphasizes what it means to be an individual of utmost character, and we take pride in going beyond our music and using the life lessons we learn on the field to impact individuals outside the band program and even outside OBU. While we come from various backgrounds, both personally and musically, it is humbling to watch the music we create bridge any gaps we may have had before. In addition, our band is made up mostly of non-music majors. It’s neat to have so many academic areas at OBU represented in one group.”

Zach Fisher, a freshman music education major from Shawnee, is excited to be a part of the group.

“I think my favorite part of being in the band is how it helps me grow as a musician. Mr. Meeks really encourages me to reach my maximum potential for playing and marching,” he said. “The band really adds to the school spirit at football games as well as around campus. From pep rallies the night before a big game, to supporting the team on Saturdays, the band really encourages people to support the Bison and cheer as loud as they can.”

Fans are in for a treat this season, Meeks said.

“We have prepared a pregame show for every home game,” he explained. “The show includes ‘Oklahoma,’ ‘The Star Spangled Banner,’ and ‘Fight On, OBU.’  We will also perform two different halftime shows throughout the season, including selections such as ‘Fire,’ the ‘Theme From Spider-Man,’ ‘You’ve Got a Friend in Me,’ and ‘Georgia on My Mind.’”

The dedication required for band members is high. The students reported to campus early and put in around 40 hours of work before classes began. Several students and recent graduates also worked diligently over the summer to prepare sheet music, instruments and equipment for the first rehearsal.

With 44 members in the band’s second marching season, Meeks is excited about what the future holds.

“I hope to continue to grow the program in every way,” he stressed. “Of course, we always love to grow numbers, but it also is important that we continue to increase the level of musical and physical performance.”