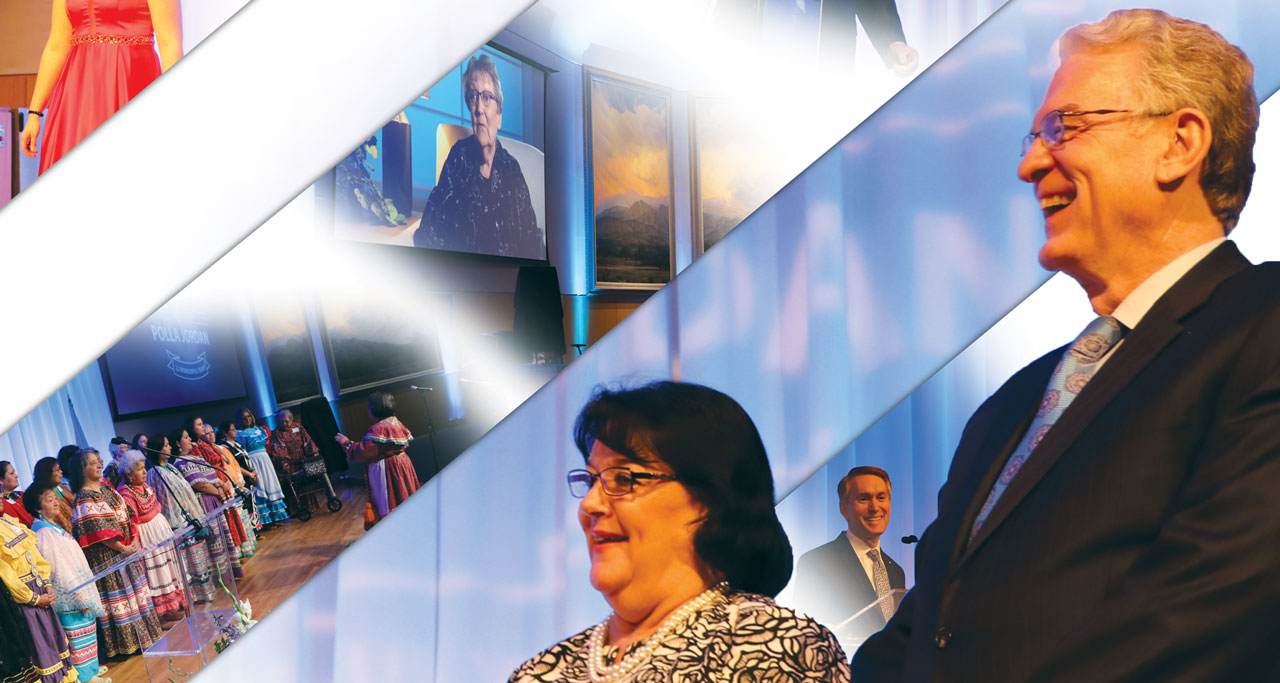 “This has been the honor and joy of a lifetime, to serve Oklahoma Baptists,” said Anthony L. Jordan to a gathering of more than 600 pastors and guests March 1 for a special banquet honoring him on his retirement as executive director-treasurer of the Baptist General Convention of Oklahoma.

The event, which took place at the National Cowboy & Western Heritage Museum, was one of a series of activities that recognized Jordan’s ministry career at the BGCO, a career that began in April 1996 and officially concludes April 15, 2018. 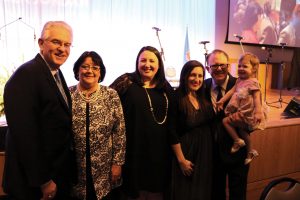 The Jordan family were all in attendance. From left, Anthony and Polla, daughter Alisha, daughter-in-law Janae and son Adrian and granddaughter Lydia.

James Swain, BGCO equipping team leader, served as emcee for the event, which featured recorded and live comments, as well as special presentations and recognitions.

The renowned music group, Native Praise, performed at the banquet. The group, which consists of Native American Baptists from various tribes, has performed around the country and is Jordan’s personal favorite singing group. Paige Shelton, a vocal music student at Oklahoma Baptist University, performed a stirring rendition of “Every Time I Feel the Spirit.”

Each of the testimonies and video tributes focused on important aspects of Jordan’s ministry career in Oklahoma, such as his work to protect unborn children, his passion for missions and evangelism, his dedication to expanding and improving Falls Creek Baptist Conference Center, investment in  Baptist Collegiate Ministry work and more. 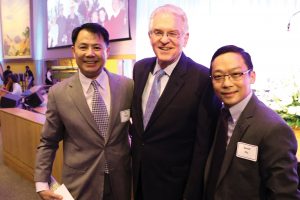 From Scripture-inspired words of affirmation to the re-telling of funny stories, the evening served as a rollercoaster of emotions for Jordan and all who attended. Jordan’s wife Polla, daughter Alisha, son Adrian and daughter-in-law Janae and granddaughter Lydia were in attendance, as well as other members of Jordan’s family.

David Hu, a young man from East Asia whom the Jordans took in as family more than seven years ago, gave a stirring testimony about how God has used the Jordans’ hearts and home to bless his life. Hu attributed his successful studies in seminary, his personal spiritual growth and ministry to Anthony and Polla Jordan.

Lankford praised Jesus and thanked Jordan for keeping the Gospel-heart and mission at Falls Creek and for making necessary updates to the famed camp.

“The things that have happened, from the new tabernacle to the thousands of students who continue to come… that was all God. But God’s chosen instrument to help accomplish these things was Anthony Jordan… So from one red-head to a former red-head,” said Lankford with a smile, “my family will be forever grateful to you and Polla and your family. You set an example for us. You were willing to take risks, if students could be saved. That’s a remarkable legacy.”

Joe Ligon presented gifts from the BGCO, which included the gift of a fishing trip to the northwest part of the United States. Ligon then unveiled a portrait of Jordan that will be displayed alongside portraits of past BGCO executive directors at the Baptist Building in Oklahoma City.

In his concluding remarks, Jordan said, “What you have done in honoring Polla and me this evening is beyond words. I think about an old song by Andrae Crouch… ‘How can I say thanks, for all the things you have done for me? … All that I am or ever hope to be, I owe it all to Thee.’ 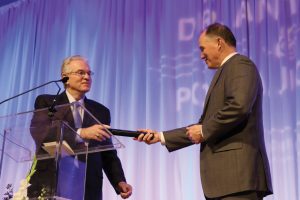 ordan symbolically passes the baton of leadership to Hance Dilbeck, his successor.

“When you’re a red-headed boy from Skiatook, you don’t expect to stand in a place like this. That God would give me this honor of leading such a great people is beyond anything I could have ever imagined. To say that I love Oklahoma Baptists is to say I am inadequate of finding the words to express what I feel.

“While I walk away from leadership, I will not walk away from the relationships that I have, the people who have invested in me and loved me. Tonight you have honored me, talking about accomplishments. But we all know these things come about only because of the infinite grace of God and His favor. You never do it alone; it is all by God’s grace and by wonderful people like you. Polla and I love you and appreciate you more than I can possibly express. Thank you.”

Jordan then symbolically handed “the baton” of leadership to his elected successor, Hance Dilbeck, and said, “I love this man. I have such respect for him. Deep within my own heart, I believe we are prepared to go to greater heights than we have ever been. I could not be more pleased to be able to step aside and for him to step into this role, and today he did.”

Finally, Dilbeck closed the event with a prayer of blessing over the Jordans.

The hearts of all who attended the banquet, or other happenings connected to Jordan’s retirement, were stirred with gratitude to God, the One who made us, saves us and keeps us in His care—not only for the lifespan of a storied ministry career—but for all time and for eternity.