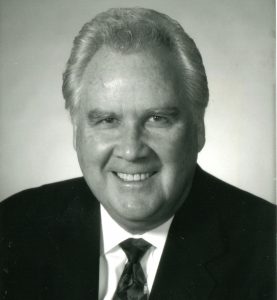 NASHVILLE (BP)—John Bisagno, an evangelistic innovator and longtime pastor of Houston, Texas, First, died Aug. 5 in Nashville following a battle with cancer. He was 84.

During Bisagno’s 30-year tenure at Houston’s First beginning in 1970, the congregation grew from fewer than 400 to 22,000 members, Baptist Press (BP) reported in 1999. During that period, the church also baptized 15,000 people, gave $250 million to missions, relocated from downtown to its current location in west Houston and helped launch the Bible teaching ministry of Beth Moore.

Some 500 Houston’s First members entered full-time Christian vocations, including 100 international missionaries under Bisagno, according to BP.

President of the Southern Baptist Convention (SBC) Pastors’ Conference in 1972, Bisagno was a frequent preacher at state Baptist evangelism conferences and the Pastors’ Conference. In 1990, he began supporting publicly the SBC’s Conservative Resurgence and nominated Morris Chapman for convention president.

But longtime friend Jimmy Draper said Bisagno’s greatest service to the SBC likely was his innovation in evangelism and ministry.

“He really was the leader in evangelism and soul winning and strategizing how to win people to Christ and create a culture where people were excited about seeing others saved,” said Draper, SBC Executive Committee ambassador and president emeritus of LifeWay Christian Resources.

Following an early career as a Dixieland jazz trumpeter, Bisagno was saved and called to ministry in 1952, making both spiritual decisions while attending summer youth camp at Falls Creek Baptist Conference Center.

“John Bisagno was a treasure,” said Anthony Jordan, former executive director-treasurer of the Baptist General Convention of Oklahoma. “He made 38 trips to Oklahoma to help us raise the money for the new Falls Creek Tabernacle. His love for Falls Creek and the Gospel is the reason the worship center in the Tabernacle is named in his honor.” 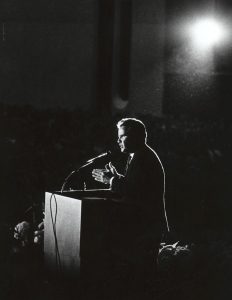 “I’m so thankful for John Bisagno, his love for the Lord and his passion for Falls Creek,” said Andy Harrison, Falls Creek program director. “Many may not know just how instrumental he was in the transformation of those campgrounds.”

OBU President David Whitlock said, “John Bisagno was a great friend to OBU, a personal encourager to me and a faithful witness and proclaimer of the Good News of Jesus.

Bisagno served as an itinerant evangelist for about a decade before accepting in 1965 the pastorate of Del City, First Southern.

First Southern averaged more than 1,000 in worship attendance under Bisagno’s ministry and pioneered the concepts of praise teams and praise bands, said Draper, who followed Bisagno as the church’s pastor. Many Southern Baptists were surprised when he headed for then-fledgling Houston’s First.

As a condition of his move to Houston, Draper said, Bisagno asked Houston’s First to pledge financial resources toward the Spireno—an acronym for “spiritual revolution now”—evangelistic campaign. The campaign involved assembly programs with evangelist Richard Hogue at 45 Houston middle schools and high schools followed by rallies with Gospel preaching. The campaign concluded with two and a half weeks of revival services at Houston’s First and the Sam Houston Coliseum.

Bisagno’s support of women’s ministry also was a hallmark of his pastorate. Draper recalled receiving a call from Bisagno in the 1990s about Moore’s women’s Bible study at Houston’s First. “She’s really going to be good,” Bisagno said. Eventually, LifeWay signed a contract with Moore, and “she’s been by far the biggest author in terms of sales that we’ve had,” Draper said.

“Bro. John empowered women in ministry,” Lewis wrote in a Facebook post. “Beth Moore, Jaye Martin and I were allowed and encouraged to pursue the calling God had on our lives. He was our greatest encourager and friend. His influence will be felt for centuries.”

In announcing Bisagno’s death to the church Aug. 5, Pastor Gregg Matte said, “Think of all the Sundays that Bro. John rose to come and tell people about heaven. And now, on this Sunday, he is in heaven rising to worship his Jesus face to face.”

The final two years of Bisagno’s life were “extremely difficult,” his son-in-law Curt Dodd said, but he always maintained a positive attitude. His wife Uldine died of cancer in 2017 just after Hurricane Harvey destroyed their house and nearly all of their possessions.

Bisagno lived in Tyler, Texas, with his son Tony before moving to the Nashville area with his son Tim. Bisagno’s cancer of the tongue and jaw metastasized to his lungs, and he spent his final days in palliative care at Vanderbilt University Medical Center singing praises to God and visiting with family, said Dodd, pastor of Omaha, Neb., Westside.

The day before he died, Bisagno told his family with characteristic optimism, “I feel great,” Dodd said. “He was always so positive.”

Bisagno said he would stop preaching when the phone stopped ringing with invitations, Dodd said.

It never did. He was scheduled to speak at a senior adult rally the week before he died.

Watch Bisagno share his testimony with Oklahoma Baptists in this short video.