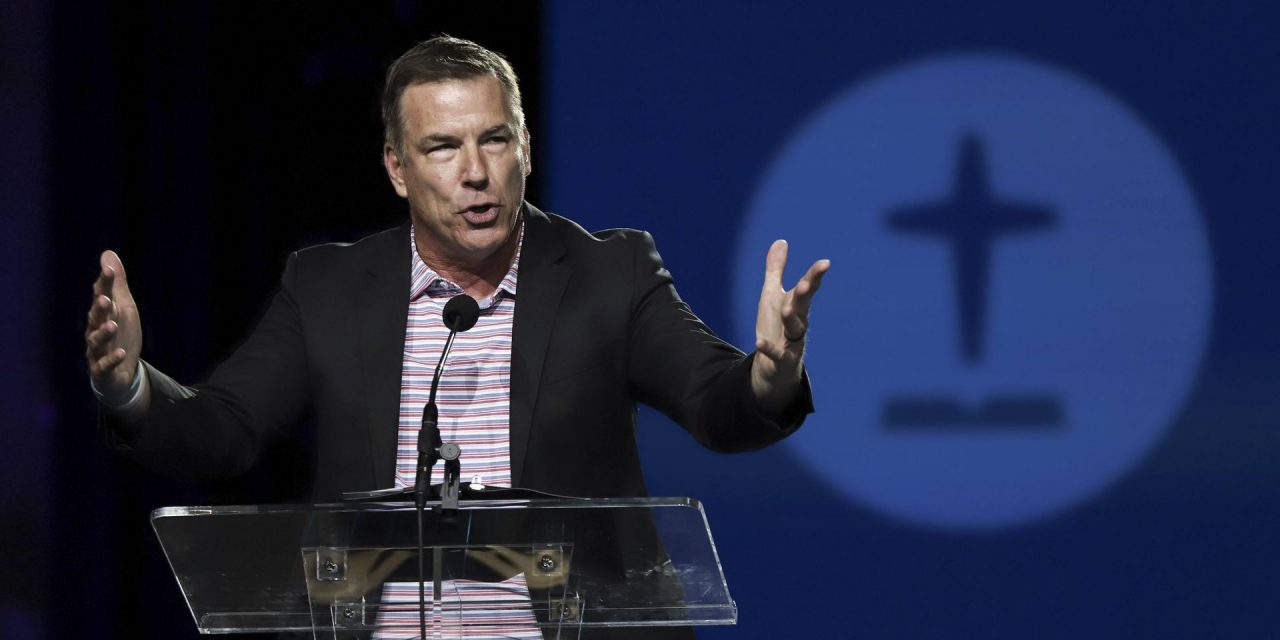 Above: North Carolina pastor Bruce Frank, chair of the Sexual Abuse Task Force, told messengers to the 2022 SBC Annual Meeting that June 14 was a day for Southern Baptists to “choose between humility or hubris.” Photo by Sonya Singh

Task Force chair Bruce Frank, lead pastor of Arden, N.C., Biltmore, didn’t mince words with messengers, calling it a “Kairos moment” for the Convention. After a lot of talk, actions were about to speak loudest. 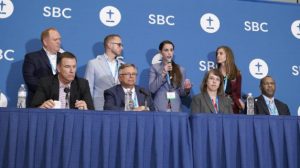 Sexual abuse survivor and survivor advocate Rachael Denhollander, speaking, answers a question at a press conference following the adoption of the recommendations of the SBC’s Sexual Abuse Task Force Tuesday, June 14. Denhollander, who served as an advisor, is joined by the members of the task force. Photo by Adam Covington

The task force recommended the formation of an Abuse Reform Implementation Task Force to be appointed by newly elected SBC President Bart Barber and the development of a “Ministry Check” website to share “properly vetted information.”

The first recommendation received what was considered a friendly amendment. The language referenced the Abuse Reform Implementation Task Force (ARITF) and stated it would operate in accordance to “best practices in keeping with Southern Baptist church polity” rather than through recommendations provided by Guidepost Solutions.

The “Ministry Check” website, which was the focus of the second recommendation, will be “established and maintained by an independent contractor, with the ARITF to oversee and report back to the Convention on feasibility, effectiveness and costs.”

Names listed on the website will be people who have been “credibly accused”, according to the recommendation.

A footnote to the recommendation defines those “credibly accused” as a “pastor, denominational worker, or ministry employee or volunteer … who has confessed to sexual abuse in a non-privileged setting, who has been convicted in a court of law, or who has had a civil judgment rendered against them.”

It goes on to say that an “independent third party commissioned by a local church or other Baptist body may determine, by preponderance of the evidence following an inquiry, that a person is credibly accused.”

They wrote that: “Filing a lawsuit, criminal charges without conviction, or an allegation not investigated by a qualified third party, will not meet this standard.”

Frank, reiterating what the footnotes said, told messengers that “the third-party firm maintaining the database will review all submissions to ensure they meet the proper evidentiary standard.”

Discussion on both motions lasted roughly 35 minutes before the vote to approve them.

In a press conference following the vote with the SATF, Frank stated his hope that Southern Baptist churches will continue in ministering to the vulnerable. The new SBC president will serve a vital role in naming those to the ARITF.

“If you’re not consistently examining how you’re structured, you can get internal and self-protective,” Frank said. “You kind of protect the brand.”

In his earlier address, Frank stressed to fellow pastors that abuse is not something they can ignore. Studies show that reported instances are “just the tip of the iceberg” and that making it OK to address abuse is going to encourage survivors to share their stories.

“You will get the phone call,” he said. “That’s not a word of prophecy. That’s just math.”

The first step Southern Baptists took today may be the introduction to the education SATF members have received in the last 10 months. Task force Co-chair Marshall Blalock talked about how the knowledge he has received would have affected his ministry in previous years.

“It would make a significant difference,” said Blalock, pastor of Charleston, S.C., First. Citing an instance when his church became aware of abuse, they immediately reported it to police. The next step was to contact their attorneys for legal advice.

“Now, my (second) question would be, ‘What’s the right thing to do to help and minister to the person who has been traumatized?’” he said.

An elevation of the discussion over sexual abuse—both in importance and consistency—should affect views on its connection toward modeling the Gospel.

“Our instincts, sometimes, are about protection of the institution. We’ve got to have a culture change in our thinking,” Blalock said. “It wasn’t that I didn’t care. … Now I know that your first instinct must be to care and provide the best in care for a traumatized person who has been abused.”