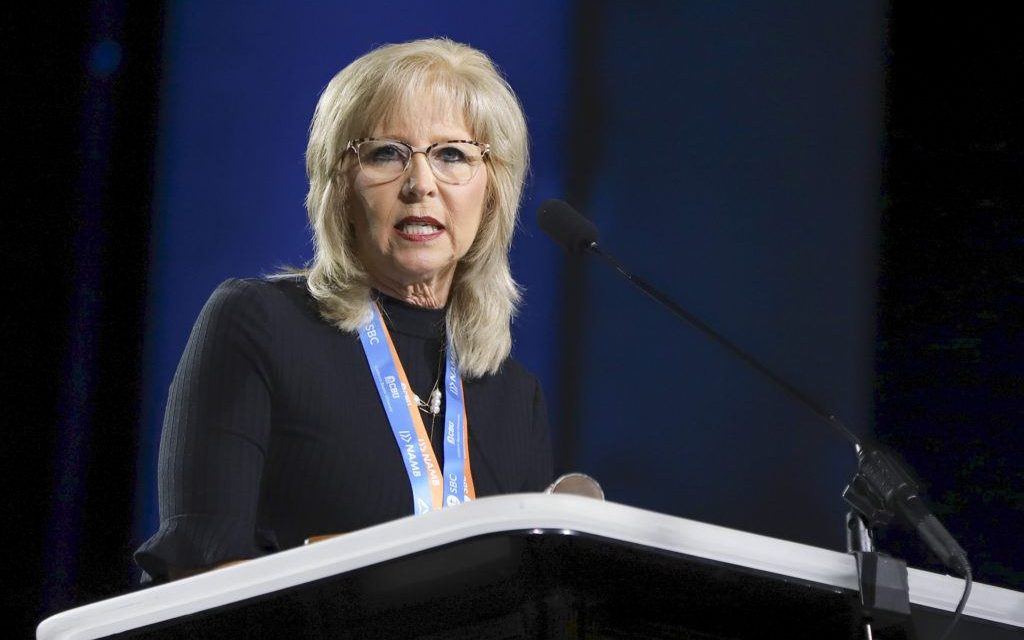 Above: Credentials Committee Chair Linda Cooper presents a recommendation to messengers at the 2022 SBC Annual Meeting. The recommendation—to form a study committee to look provide clarity in the use of the word “pastor”—was later withdrawn by the committee. Photo by Sonya Singh

A decision on whether or not to disfellowship Saddleback for ordaining three female staff members as pastors in May 2021 will be delayed until a later date.

The original motion, submitted by Shadd Tibbs of Louisiana during the 2021 SBC Annual Meeting in Nashville, will remain with the Credentials Committee until it is prepared to present another recommendation. 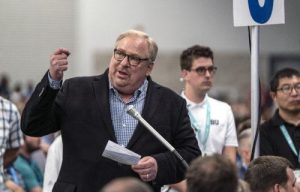 In its recommendation Tuesday, June 14, the committee declined to call for Saddleback to be disfellowshipped “until clarity is provided regarding the use of the title ‘pastor’ for staff positions with different responsibility and authority than that of the lead pastor.”

Cooper said the committee unanimously believes that “a majority of SBC churches hold the belief that the office of lead pastor, elder, bishop or overseer is limited to men as qualified by Scripture.”

However, the committee recommended that messengers form a study committee to look into the ways various churches assign the term “pastor” to different ministry roles so as to provide “clarity regarding the ‘office of pastor’ as stated in the Baptist Faith & Message…”

The committee’s job is to consider whether a church is in friendly cooperation with the Convention. Because it is a standing committee, it does not have to wait until another annual meeting to present a future recommendation. It could present a motion to disfellowship a church to the SBC Executive Committee, which will meet later this year and in February 2023.

The committee “found little information regarding convention beliefs regarding the use of the ‘title of pastor,’ for staff positions with different responsibility and authority than a lead pastor role,” Cooper said.

In debate following the recommendation, both Southern Seminary President Albert Mohler and SBC presidential candidate Tom Ascol spoke against it.

Mohler, who served on the committee that composed the Baptist Faith and Message 2000, said Southern Baptists are not confused by what the statement means by the word “pastor.”

Adam W. Greenway, president of Southwestern Seminary, proposed an amendment to the committee’s recommendation, which the committee received as friendly. The amendment would have changed the focus of the proposed study committee to a study of how closely a church must adhere to the Baptist Faith and Message to be considered in friendly cooperation.

A hand-raising vote on Greenway’s amendment was too close to call, forcing a ballot vote, which required the continuation of the report to the afternoon session.

After announcing the failure of the amendment in the ballot vote, SBC President Ed Litton called on Saddleback Pastor Rick Warren to speak to the committee’s recommendation. Warren, the church’s founding pastor who has seen it grow to the largest church in the Convention, has recently announced his retirement.

He used much of his time to speak not directly to the issue at hand but rather to talk about his history as a Southern Baptist and express his appreciation to the Convention.

“I have no intention of defending myself…,” he said. “I could talk to you all about what I believe about the gift of pastorate as opposed to the office of pastorate, but I’m not here to talk about that.

After Warren’s speech, committee chair Linda Cooper announced that the committee would withdraw its recommendation.

A future recommendation regarding the original motion about Saddleback will come from the Credentials Committee at a later date.