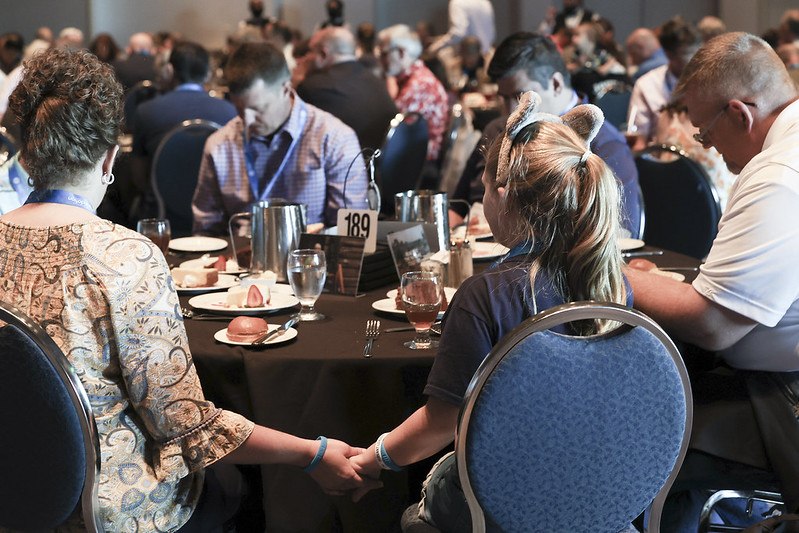 Above: A young family stops to pray together with fellow guests at the International Mission Board dinner in Anaheim on June 13. During the annual dinner, attendees enjoyed a time of fellowship as well as hearing from IMB missionaries and leadership. Photo by Kathleen Sparks

ANAHEIM, Calif. (BP)—Amid the busy event schedule of the Southern Baptist Convention’s annual meeting, nearly 2,000 attendees gathered for the International Mission Board (IMB) dinner. During the June 13 program, IMB leaders and missionaries reminded the crowd why the SBC exists and how God is at work around the world through IMB missionaries.

The world is riddled with tragedies. 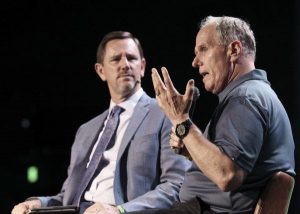 Mick Stockwell, right, who has served in the Ukraine for 15 years, speaks with International Mission Board President Paul Chitwood. He expressed his appreciation for Send Relief efforts among refugees.

Tens of thousands have died in the war in Ukraine.

More than 63 million unborn children have been aborted in the U.S. since the 1973 Roe v. Wade ruling.

This week, convention messengers will be asked to respond to the problem of sexual abuse.

Still, none of these are the greatest problem in the world.

“I contend that the world’s greatest problem can be communicated in a single word: lostness,” Chitwood said.

God’s solution to this problem of lostness is the Gospel. And “the IMB exists because 7,000 people groups remain unreached with this Good News, and 3,000 of those unreached people groups are yet unengaged,” Chitwood said, adding: “We know the solution to their greatest problem, and we’re sending missionaries to tell them.”

Lisa Farrell, director of the IMB’s prayer office, shared that there are more lost people alive today than ever before. In fact, 4.6 billion are lost. That’s 59 percent of the world’s population separated from God without salvation that comes through Christ.

Farrell hosted a panel of IMB missionaries who shared how lostness looks different around the world in the areas they serve.

IMB missionaries Steven and Debbie shared what lostness looks like in South Asia. 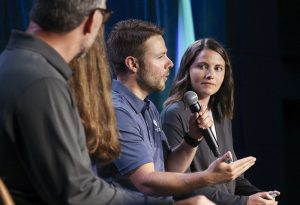 In a panel discussion at the International Mission Board’s dinner at the SBC annual meeting in Anaheim, missionaries Patrick and Erin share what lostness looks like in Glasgow, Scotland, where they serve.

“Lostness in South Asia looks like a plethora of religious festivals,” Debbie said. “It’s the smell of smoke from funeral pyres. It’s people bathing in a ‘holy’ river to wash away their sin. The blare of the call to prayer five times a day. It’s incense burning from your neighbor’s worship. The clanging of the prayer wheels. Lostness looks like 1.6 billion South Asians who do not know Jesus.”

IMB missionaries Patrick and Erin shared what lostness looks like in Glasgow, Scotland.

“Glasgow is Scotland’s largest city, which has a population of 1.2 million people,” Patrick said. “If we had to sum up what lostness looks like in that context we would use phrases like ‘post Christian,’ ‘urban deprived,’ and ‘ethnically and spiritually diverse.’”

IMB missionaries Michael and Naomi shared what lostness looks like among dispersed people living in a global city.

“What we’ve experienced while working among displaced Sub-Saharan Africans in Paris, France, is a lostness that is not so much discerned by watching a person entering a mosque or breaking out their prayer mat on a street corner,” Michael shared. “Rather, we observe lostness in the brokenness of the lives of the dispersed people who are clinging to empty promises of a better life.”

Farrell closed the panel by saying, “With more than 157,000 people dying daily without Christ, the problem of lostness can sometimes seem overwhelming. But we know there is hope for unreached people around the world because we know that the Gospel transforms lives.”

Ukrainians mobilized to nations through tragedy

Chitwood, alongside Mick Stockwell, IMB missionary to the Ukrainian people, said Southern Baptists have been at work sharing the love of Christ in tangible ways since the beginning of the war in Ukraine.

“We thank God for the network of partners, for the ongoing generosity of Southern Baptists to support this relief effort and for the countless eternities that have been changed as so many Ukrainians are finding the light of the Gospel in these dark days,” Chitwood said. The news that Southern Baptists have given $11.5 million to the Ukraine crisis through Send Relief was met with applause from the crowd.

Stockwell and his wife, Dalese, have spent 28 years taking the Gospel to European peoples as IMB missionaries. Fifteen of those years were spent in Ukraine.

When the war broke out, Stockwell was with pastors, training them how to work among their own people. He was heartbroken for his people. But he was assured that Send Relief would be ready to bring help and hope to the hurting.

Stockwell expressed hope that because local pastors have been mobilized to minister to their own people, they are ready to take the Gospel to the nations where they now live as refugees.

Chitwood reiterated: “The problem is lostness. The solution is the gospel. Your IMB missionaries are steadfastly present among people who have never heard the Gospel — people in hard-to-reach places, people in cities and people who are dispersed and displaced around the world. Your missionaries are present to cultivate Gospel access, Gospel belief, and church planting and multiplication. This is the story of the IMB. This is the story of Southern Baptists.”