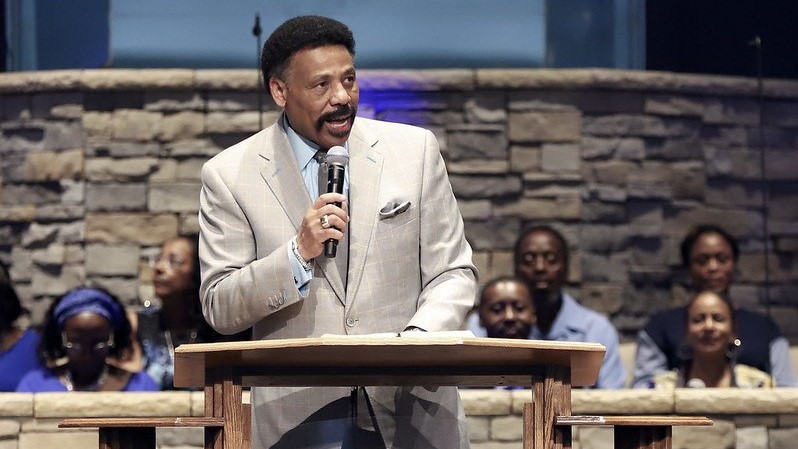 Above: “There are two answers to every question: God’s answer and everybody else,” noted pastor Tony Evans told attendees at the National African American Fellowship’s June 12 worship service at Yorba Linda, Calif., Friendship. Photo by Sonya Singh

ANAHEIM, Calif. (BP) – Noted pastor and author Tony Evans likened the church of today to referees on a football field who have chosen sides.

“It becomes unfortunate when those who are to be the independent on the field decide to join the jersey of the competing teams, because the moment they do that, they have lost their uniqueness, their distinctiveness,” Evans preached before the National African American Fellowship (NAAF) of the Southern Baptist Convention (SBC) during its June 12 worship service at Yorba Linda, Calif., Friendship.

“And what you find out is the competing teams use them rather than follow their lead.”

Evans told NAAF that God’s church needs to carry out its created purpose in proclaiming and upholding God’s Word, even amid America’s political and racial turmoil.

“The point is today that the church of Jesus Christ has lost its uniqueness. Rather than saving and representing the team in heaven, they have been mimicking the teams of the culture,” Evans said. “They have decided to be more Democrat than Christian, or more Republican than Christian.

“We are actually a church that’s participating in cancel culture,” Evans said, “because we lead churches and cancel out the Word of God by the doctrine of secularism and deciding only when it’s convenient to be Christian, not taking a stand with Jesus Christ, because we’ve got these legislative bodies.

Evans based his sermon on Matt. 16: 13-19, backing it in part with 1 Peter 2:5. He exhorted the church in its calling found in the meaning of the word “Ecclesia,” a church that is a legislative body adjudicating God’s Word.

“And He said whatever you bind on earth, shall have been bound in heaven, and whatever you loose on earth, shall have been loosed in heaven,” Evans said. “In other words, if you kick, I’ll back you up. A lot of us are waiting on God, and God is waiting on us. He says if you bind, if you loose, if you forbid, if you permit, I will back you up, as long as you do kingdom stuff.”

Evans, founder and senior pastor of Oak Cliff Bible Fellowship in Dallas, has authored more than 100 books, including the CSB Tony Evans Study Bible and Commentary, the first such work by an African American.