How SWEET it was 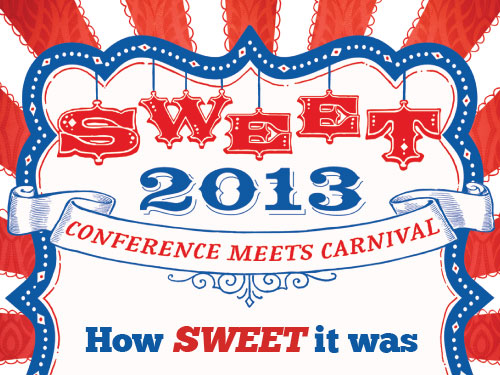 MOORE—If Southern Baptist women throughout Oklahoma aren’t energized with new ideas and enthusiasm for ministry, it’s not the fault of state leadership.

Women missions and ministry leaders from across the state gathered Aug. 24 for a SWEET (Statewide Women’s Enrichment and Education Training) Conference at Moore, First with a fun and festive environment designed to expand their knowledge and ignite a passion among women in their churches.

Clothed in a carnival theme, from the Midway to the Grandstand Stage to 20 Side Shows and 10 forums, the conference brimmed with a plethora of information and encouragement for women to take back to their churches. Subjects ranged from moving from followers to leaders, how to be a biblical woman, bridging the generation gap, mission education, public speaking, reach the emerging generation, organizing ministry, parties with a purpose and social media.

In a Side Show titled “Raiders of the Lost Art,” Amy Gilmore from Inola, First said she discovered it is easy to bring together women of all ages to learn what she called “lost arts.”

“There are women who want to learn these lost arts of crocheting, knitting, canning, cooking, furniture refinishing, sewing, quilting, embroidery, canning, hair braiding and cake decorating, but don’t have anyone to teach them,” Gilmore said. “We found women in our church with all these skills who were willing to be teachers.”

She said a group got together and made of list of things they wanted to learn.

“The first on the list was making biscuits,” she revealed. “We found an expert biscuit maker, and that led to pie crusts, pumpkin and chocolate pies and homemade yeast rolls. We had people involved from five years of age on up.”

Gilmore noted that most of the women who taught the classes wouldn’t have been comfortable teaching a Bible class, but because they had been doing these things for years, were eager to share what they knew.

“We set up tables and sewing machines in our gym for a sewing class led by a woman who does sewing for a living,” Gilmore said. “We don’t have to look outside our churches for women who can do these things; they are right there.”

Gilmore emphasized that the skills classes can be taken from the church into the community for those who are not comfortable coming to a church.

“Sometimes, people will come to something outside the church building, and by loving on them, we can change their attitude toward church,” she said. “You will discover so many women who have needs. There are women out there who are hurting, and this gives us an opportunity to minister to them.”

Gilmore pointed out that there are some skills that aren’t lost arts that can bring women together, such as computer training and Crockpot cooking.

In a Side Show on Biblical Womanhood, Brandi Biesiadecki, Oklahoma City, Southern Hills, said women have unique abilities and need to know the Scriptures unique to them.

“When you have guidelines and boundaries, there is freedom,” said Biesiadecki.

“We are to dress respectably and modestly, not with fancy attire focusing on the outer person,” she said. “It is not a call to dress ugly, but not to wear anything that would bring undue attention to us.”

The second admonition, she noted, is to learn quietly.

“Don’t always do the talking,” she emphasized. “Give men a chance to do what they are supposed to do.”

She pointed out that the Bible, not the changing world around us, must be the standard by which we live.

“The most important thing to remember when dealing with Scripture is there is no private interpretation, and you must always consider the context,” Biesiadecki said. “Let Scripture interpret Scripture, and unless it is unquestionably metaphorical, it means what it says.”

Featured speaker Chris Adams, senior lead Women’s Ministry Specialist at LifeWay Christian Resources, told the women that through smooth and not-so-smooth seasons of life, we can be comfortable knowing God is at work in all the issues of life.

She said last year was a stressful one for her with a lot of changes going on at LifeWay, and she was hoping 2013 would be smoother.

But, she revealed, the second week of January, in just one day, issues started popping up, not the least of which was a misunderstanding about reserving space for the 2013 Women’s Forum, one of the largest women’s meetings at LifeWay.

“I went home discouraged, but the next morning, gave all these things to the Lord,” she said. “The Lord brought to my mind that He knew what was going to happen. As I realized God must have something better planned, my attitude began to change.”

She noted as she was reading in Numbers, God spoke to her heart.

“I realized the bigger the issues, the more God gets to show off,” she said. “God’s power is not limited. I watched God work on the issues one at a time, and realized we can’t navigate this life without depending on Him. His power allows us to work through things, and His covenant of peace is available to us in every situation we face.”

She listed eight things she chose to do: 1. List the issues. 2. Acknowledge God knows those issues. 3. Pray about it and pray all day long. 4. Seek some wise counsel. 5. Pray again. 6. Ask prayer warriors to pray for you as you are dealing with those issues. 7. Stay in the Word, and watch for messages that apply to those issues. 8. Choose to allow God to do what He wants in those issues.

“These steps don’t make the issues go away, but we are changed in the process,” she pointed out.

Adams acknowledged that we want our journey with the Lord to be laid out clearly, and then we can decide if that’s what we want to do.

“But God doesn’t do it that way,” she declared. “He wants us to put our name on a blank sheet of paper and hand it to Him. From then on, we are His and do what He wants us to do.”

Adams concluded that when we’re waiting in faith, and people see us keeping our eyes on Jesus in whatever season we’re in, they see the fragrance of Christ flowing through us.

The conference was preceded with a specialized pre-conference geared towards women who want to write, speak or lead worship. Close to 100 women were challenged to wait on God’s providence by B&H Publisher Jennifer Lyell. Breakouts focused on being published, blogging, social media, leading worship and public speaking. The evening ended with a panel discussion that was recorded and will be available on the BGCO Women’s website in the near future.