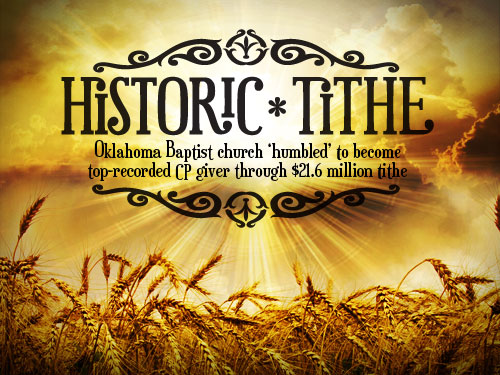 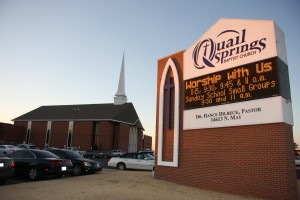 By December 2012, Oklahoma City, Quail Springs had already given nearly $1 million through the Cooperative Program (CP) for the year. When the church, which forwards 13.5 percent to CP each year, received an historic $21.6 million tithe at year end, the gift propelled the church to unprecedented levels of giving.

“Frankly, it is a bit overwhelming,” said Hance Dilbeck, pastor of Quail Springs, of the contribution. “The church members (husband and wife) who gave this did so as a matter of principle,” he said.

“They tithed on a large increase just as they have in the past on a smaller scale. Quail Springs followed the same pattern. God has blessed us as we have given 13.5% through the CP. This has been our pattern through multiple building campaigns and a rapidly growing budget. We believe it would be a mistake to change our pattern of giving now,” added Dilbeck.

Of the total contribution, Quail Springs sent $2.916 million through the CP, making its annual total more than $3.8 million. Of the $2.916 million CP contribution, 50 percent was sent to the Southern Baptist Convention (SBC). More than $725,000 will go toward international missions through the International Mission Board, more than $330,000 to missions in North America through the North American Mission Board and approximately $320,000 to be shared by the six SBC Seminaries. In addition, $162,000 from the contribution was sent by Quail Springs to Capital Baptist Association. 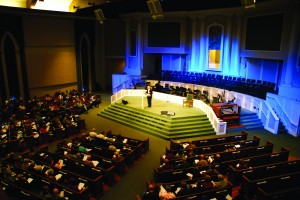 In Oklahoma, funds will be directed by Executive Director-Treasurer Anthony L. Jordan and the Baptist General Convention of Oklahoma (BGCO) board of directors to boost ministries like Falls Creek, partnership missions and the BGCO affiliates.

“The Lord is amazing,” said Jordan. “The CP process, which is based on biblical principles, shines through. This is an instance where someone is hugely blessed by God. They are faithful to tithe, the church is faithful to give through the CP, and the state and national conventions wisely steward the monies. A rising tide lifts all boats, and we will ensure each penny is invested in Kingdom work.”

“I commend not only these generous givers, but also Pastor Dilbeck for his faithful leadership and stewardship.”

The contribution propels Quail Springs, already a national leader and the state’s leader in total CP giving, to all-time record giver, according to research from the Executive Office of the SBC.

“From everything we can tell, this appears to be a record-setting gift of a local church in a single year through the Cooperative Program, “ said Frank Page, SBC president. “We thank the Lord for this gift — and for every gift — that enables the Convention to further its Kingdom work of reaching people with the Gospel of Jesus Christ.”

The church was founded in 1950 as Oklahoma City, Nichols Hills, and moved to its present location on N. May Ave. in 1982. Quail Springs has had four senior pastors in its history: Rupert Naney, Charles Graves, Brian Waite and Dilbeck.

“The church maintains an active role in the Oklahoma City metro area, as well as missions activities throughout the world,” said Jordan. “Whether through helping public schools with tutors to its active food pantry ministry, Quail Springs has a heart for reaching the world at its door. The church’s ministry staff has proven their commitment to taking the Gospel to the ends of the Earth.”

Dilbeck, who holds masters and doctorate degrees from Southwestern Seminary, has been the pastor of Quail Springs since 2003.

“Our faithful people have been giving sacrificially through back-to-back-to-back campaigns in order to provide facilities to reach our growing community,” said Dilbeck. “This major gift allows us to move forward with our plan to gather people together, build them up and send them out with the Good News of Jesus.” 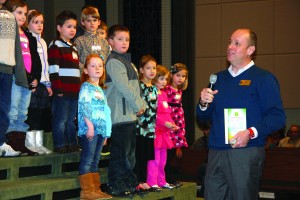 The church’s budget at that time was $1.5 million. Throughout those years, average Sunday School attendance has more than doubled.

Prior to his time at Quail Springs, Dilbeck served as senior pastor of Ponca City, First. A native of Pawhuska, he has been the featured preacher for Falls Creek Youth Camp, chairman of the Board of Trustees at Oklahoma Baptist University (2001), and currently serves as a trustee at his alma mater,  Southwestern Seminary.

“I have been privileged to serve in various capacities of SBC and BGCO life, and I cherish the role Southern Baptists play in the Kingdom of God,” said Dilbeck. “This is a key moment in the life of our church. We hope this historic, beyond generous gift will lead to even more unity and maturity as we seek the Lord’s will as to how to invest every dollar in Kingdom work.”

At a church business meeting on Jan. 27, Dilbeck announced the momentous gift to the church congregation and called on members to pray about how God would lead them to use the funds.

“God is faithful,” he said. “He has provided for His Church through the stewardship of faithful church members. Now we as a congregation will work to be faithful stewards.” To quote Haggai, ‘The silver and the gold are mine says the LORD.’”