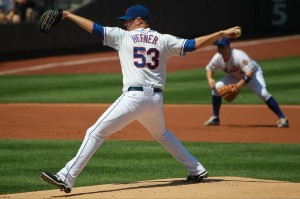 Jeremy Hefner makes a delivery during his first year with the New York Mets.

The Hefners always made it a priority to go to church on Sundays, even if there was a weekend baseball tournament.

Jeremy Hefner said it wasn’t a big deal to wear his baseball uniform to church during those youthful years as a member of Perkins, First. As soon as church was over, he and his family would go to the game.

“I appreciate how my dad and mom were very supportive of me,” he said. “They also made it known that church and family were two of the most important things. We would rarely miss church because of sports. That was instilled in me at an early age, and we will practice that with my son (Jace, who will be three this year) and daughter (Jaylee, a newborn) whenever we get to that point.”

These encouraging words come from a pitcher who was in the New York Mets starting rotation last season.

Hefner lived most of his life in Oklahoma and pitched for Perkins-Tryon High School, leading the Demons to three straight Class 3A state tournament semifinal appearances.

Last December, Perkins-Tryon honored Hefner with a ceremony retiring his high school number. He wore No. 1 for the Demons, which seemed appropriate since he was the first player at Perkins-Tryon to have his number retired.

After high school, Hefner attended Seminole State College, where he met his wife Sarah, and then pitched at Oral Roberts University for one year. In 2007, he was drafted in the fifth round by San Diego and played four seasons in the Padres’ farm system.

Last season, Hefner was picked up by the Mets and made his major-league debut April 22, coming in relief against the San Francisco Giants.

Hefner collected his first major-league win on May 30 when he faced the Philadelphia Phillies. He also gave a bold impression from the plate, collecting a home run among his three hits. He became the first pitcher since 2002 to homer in the same game while earning an initial MLB win.

Critics gave Hefner some positive remarks about his first year with the Mets. Though he struggled at times, he ended the season strong with wins in his last two outings. CBSSports.com expects Hefner to “battle for a spot in the Mets’ rotation next season.”

“It’s a year-to-year thing for me,” Hefner said. “I just have to go into spring training and prove that I can pitch at the big league level, continue to improve myself and prove to my coaches and teammates that I belong.”

Teammates were a positive aspect for Hefner last season. With intentions to be strong in his daily Christian walk, he sought out support from other believers on the team.

“There were between four to six strong believers, depending on who moved up and down (playing for the Mets or minor league teams),” he said. “We could lean on each other. I never had that before. I never had more than one person who I could talk to about spiritual issues and dealing with struggles and temptations.”

As Hefner continues to further his professional career, he also aspires to be that positive influence for those he connects with, both on and off the field.

“I want to use my platform to talk to kids about Christ,” he said. “I’ve had the chance to speak with a couple different youth groups, and I hope that will continue. I want to use baseball to further His Kingdom.”

The days seem grim when a professional athlete who will take a stand for Christ is featured. Usually, it’s the athletic superstar, caught in a scandal, who is promoted.

Updated information on the athlete’s debacle roll on the bottom of an ESPN feed, and being interviewed by a famous talk show personality is the latest buzz.

While many athletes appear to make themselves known through such media frenzy, here is someone who can help strengthen the confidence in today’s sports heroes.

Jeremy Hefner is a professional baseball player who makes church a priority, loves his family and plans to raise his children with the same Christian standards that were instilled in him as a boy.

May the Lord bless him and use him to make a difference.