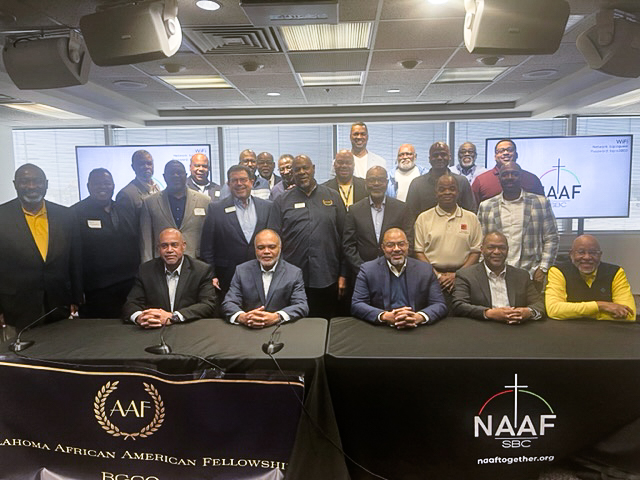 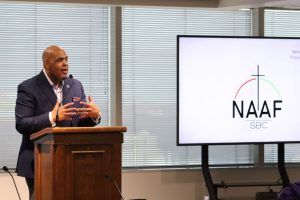 Willie McLaurin, interim CEO of the SBC Executive Committee, speaks during the NAAF Spring Board Meeting.

The NAAF is a fellowship of African American churches who are affiliated with the Southern Baptist Convention (SBC) and regularly hosts meetings throughout the year in various states that have an active African American Fellowship. This was the first time NAAF hosted a national meeting in Oklahoma. Approximately 50 board members met to conduct NAAF business.

“For our board meetings we normally go to different towns around the country to fellowship with the pastors in those cities,” explained Frank Williams, pastor of Wake-Eden, N.Y., Community, who serves as NAAF president. “These meetings create a space where NAAF can also meet and help strengthen the pastors who are in these locations. 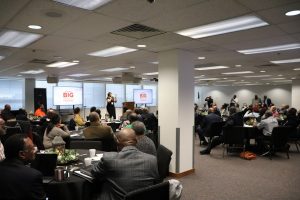 “This is the first time we have met in Oklahoma City,” Williams continued. “We had planned to come here in 2020, but that was just as the pandemic started. We are glad we could host our first in-person meeting since the pandemic here in Oklahoma.

“I also want to thank Walter Wilson (African American affinity ministry partner for Oklahoma Baptists),” Williams continued, “who pulled us all together for this long overdue session. I have learned of the work of Dr. Wilson in increasing the involvement of African American congregations in the life of Oklahoma (Baptists) from just three churches all the way to now 70 churches.”

Fisher shared his appreciation for having the NAAF meeting at the Baptist Building.

“We are so honored to host to the NAAF meeting and Sunday School Retreat,” he said in his official greeting and welcomed the leaders at the event. “We are grateful for the opportunity to fellowship and continue to share in ministry with our African American brothers and sisters in Christ.”

Willie McLaurin, interim CEO of the SBC Executive Committee, was also present at the event and greeted the attendees.

“Thank you for all you are doing to lift high the name and the fame of the Lord Jesus Christ, here at home and around the world,” McLaurin told the group. “(The SBC’s) job is to come alongside and assist churches with collaborative partnerships, cooperation and generosity. We are a missions-oriented people. We have always been focused on evangelism and ministry. And we will continue to be.”

Wilson was instrumental having the Baptist Building host this year’s NAAF meeting and spoke on the meeting’s significance with Oklahoma Baptists.

“This was an extremely historic gathering,” Wilson said. “All of the entities that make up Southern Baptists life are here. Everyone has representation here—IMB (International Mission Board), NAMB (North American Mission Board), GuideStone, Lifeway as well as the (SBC) Executive Committee.

“NAAF has been in existence in the Southern Baptist Convention since 1989. They were pleased that Oklahoma Baptists invited them to host their meeting here. It has been a joy to host them in the Baptist Building,” Wilson said. “I am proud of Oklahoma Baptists. This is one of the best conventions for support of African American ministers. The convention rolled out the carpet for them. Everything was just wonderful. People were asking me, ‘Why haven’t we been here before?’”

“The biggest impact was All God’s people, ALL in for The Kingdom.” Wilson said. ”People are saying it was the best NAAF board meeting ever and that Oklahoma Baptists are truly dedicated to unity.”

In addition to the NAAF board meeting, on Saturday, March 26, Lifeway sponsored the “Big Results” Sunday School Retreat. More than 100 people were in attendance for that conference. Mark Croston, Lifeway’s national director of Black church ministries, was the keynote speaker. NAAF President Williams also presented.

Wilson spoke of the positive impact that the two events had on the OAAF, in inspiring them to involve more pastors in the fellowship.

“OAAF is planning to reach out to 10 more non-SBC African American pastors, offering to help them in any way,” he said.

Wilson also reported that more events were being planned to take place in the state, including another Lifeway Sunday School event planned for Tulsa in October to be hosted in a location to be determined.

Visit naaftogether.org for more information about the NAAF.