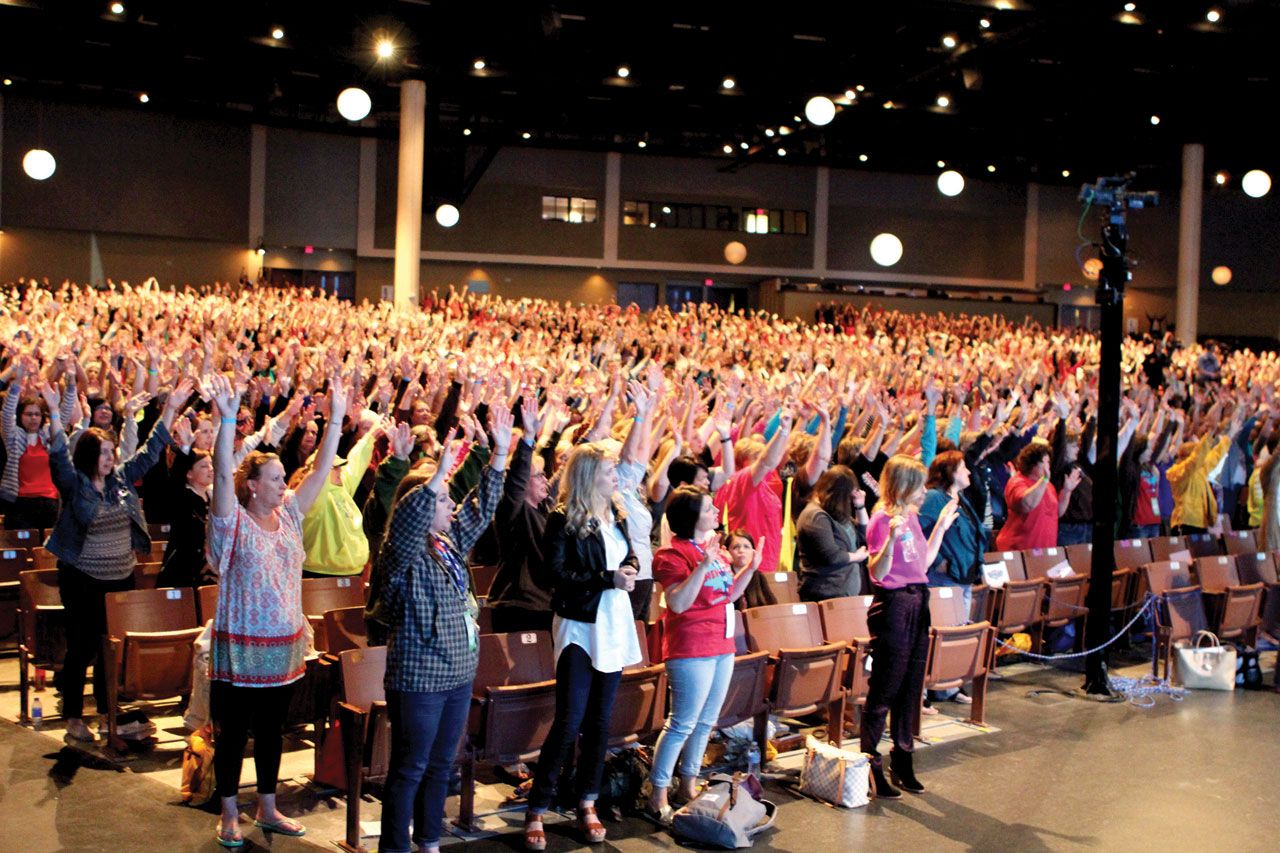 Women learn to be super heroes, give a super offering at 2015 Women’s Retreat 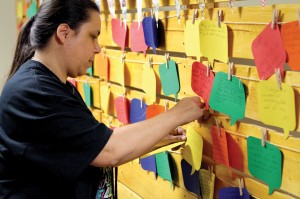 DAVIS—Even super heroes can’t control everything. Such as power outages caused when a cement truck strikes a power line, and rain-soaked construction sites leading to mud-slick roads and pathways. But these minor glitches did not dampen the spirits or the heroic powers of some 2,560 women attending the annual Baptist General Convention of Oklahoma (BGCO) Women’s Retreat at Falls Creek Baptist Conference Center April 17-18.

The women may have been a little slower than a speeding bullet, able to leap only short buildings and been just strong enough to stop a powerful golf cart, but with many wearing capes that represented this year’s theme of “Heroes,” they learned how to harness and put to work God’s power in their lives.

Some found they had the power to fly through the air as they floated along zip lines. Some tested their skills by making their way through obstacle courses, some used their prowess to “catch and release” fish, and others toned their bodies during an aerobics class. 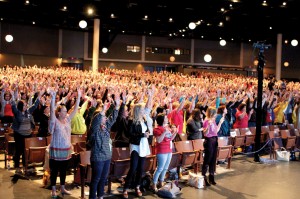 But most important was their resolve to rise up as daughters of God and be everything He created them to be.

“I’m always blown away at the generosity of the women who attend this retreat,” said Kelly King, BGCO women’s missions and ministries specialist. “They gave more than $34,000 for a special project in North Africa. As a result,  a couple with Oklahoma ties serving with the International Mission Board will be able to provide clean water to women and families by building new water wells. More importantly, it gives them a platform of sharing living water through Christ.”

Rebekah Lyons, author of the Bible study Freefall to Fly, from Nashville, Tenn., spoke to the women about how they can live their lives as super heroes.

Lyons told the women that a calling is when talents and burdens collide. 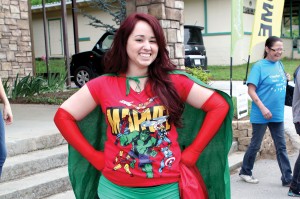 “Talents are birthright gifts,” she explained. “They look nothing like the person’s next to you. God’s creativity is vast. He doesn’t need two Rebekahs. For each of us, it is different. It’s doing what we love.”

The burden part, she said, is not just what you’re good at, but why. It is formed by the life one has led.

“You can’t write your story ahead of time, because it would pale in comparison to what God is calling you to do,” she emphasized. “It’s never too late to live this one life well—the life that longs to live in your heart.”

Lyons said she wants her life to count for something.

“When you do what you do for an audience of One, you always count,” she noted. “Public admiration will never heal private rejection.”

She admitted that the approval of man was keeping her from walking with God.

“God began a new way of what calling looks like,” she said. “More important than what you do for God is what you are before Him. You never have your calling so buttoned up that you don’t need Him. Your dependency on Him will never end. No speaker, no book, is going to help you with your calling—only the Caller Himself.”

The women also had opportunity to participate in three of eight Super Seminars ranging in topics from Quiet Time, Girl Talk, and Mommy Wars to prayer life, being a super hero to persecution. 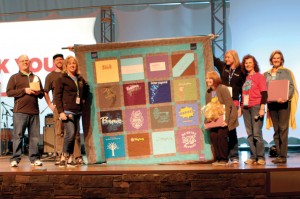 Kelly King, third from left, was honored for her 10 years of service, receiving a quilt made up of event T-shirts over the years (Photo: Tiffany Zylstra)

Speaking about the trials of believers in persecution, Nik and Ruth Ripkin, veteran overseas workers for 30 years in Eastern and Southern Africa, talked about sharing Christ with people who, when they believe, it will cost them everything.

“We have edited out the blood, guts and horror of witnessing in hard places,” he admonished. “We tend to send sheep to win sheep.”

He said they came out of Africa broken, and since they’ve been back in the U.S., they haven’t heard one sermon on suffering and dying for Jesus.

“We treat the Word of God as if it’s past tense,” he said. “Is Jesus just for clean, upstanding Christian camps, or is He still for the crosses of the world?”

He added that persecutors know long before believers that God is up to something.

“We have set the bar for Christianity so low,” he lamented, adding that the entrance payment for Muslims who come to Jesus is that their children will never be allowed to go to school and get an education.

Ripkin told of a believer who was imprisoned for 17 years. Asked how he made it through each day, the man said he had two disciplines. Every morning, he stood at attention facing east, raised his arms in praise and sang songs to Jesus. And on every scrap of paper he could find, he wrote Bible verses and words to Christian songs and stuck them on a wet post until guards found them, and he was beaten. 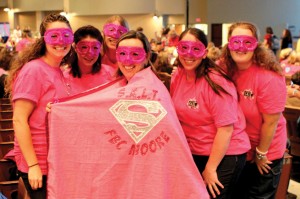 Members of Moore, First came dressed as heroes. The church was among the leaders, with one of the largest groups in attendance. (Photo: Tiffany Zylstra)

At one point he found a whole sheet of blank paper with a pencil on top of it. Grabbing the writing material, he began to write—as small as he could—verses and songs, and when he finished, he posted them on the wall. When the guard found the paper, he was so angry, he told the man he would be executed. As he was being led to his execution, hundreds of prisoners stood in their cages, facing east, and began singing the song they had heard the believer sing every morning. The guard became so frightened by who this man was they were executing, he was released from prison.

“The Bible commands us to pray for believers in persecution when they can no longer stand,” Ripkin said. “Persecuted believers know Jesus, know the power of prayer and fasting, have learned large portions of God’s Word and kept it in their hearts, as well as large portions of their own Christian music. They know their suffering is for Jesus and persecution is normal. They have claimed their freedom and lost their fear.”

Ripkin emphasized that the Bible you can recreate is really the only Bible you have.

“You don’t have to smuggle Bibles into Saudi Arabia if you are the container for it,” he explained.

Ripkin noted that while fear is the biggest tool Satan has, about 70 percent of those who practice their faith live in persecution.

On Saturday morning, King was honored for her 10 years of service as women’s ministries specialist with a slide show highlighting her years, two scrapbooks of photos, letters and commendations from women across the state and a quilt made from T-shirts from the all 10 retreats she has led.

“God continues to work in the hearts of women through this event,” said King. “I love that more than 200 churches gather together under one roof for worship, and leave with a reignited passion to follow Him.”

King added that this event could not happen without the tireless efforts of a volunteer planning team and the number of volunteers who serve.

“Many of our volunteers come back year after year because they love to see women grow in their walk with the Lord,” she said.

Churches winning prizes for having the most women in attendance were Del City, First Southern; Edmond, Waterloo Road and Moore, First. Smaller in attendance churches with the biggest groups were Sentinel, First; Geronimo, First and Arapaho, First.

Through the event, powerful times of worship through music were led by Marcy Priest.  In addition, ladies were able to view a sneak preview of the new Kendrick Brothers movie, “War Room.”

Next year’s retreat will be April 22-23 with special guests Liz Curtis Higgs and Lisa Harper.