Hanging up her cleats: Williamson retiring after 44 years of service 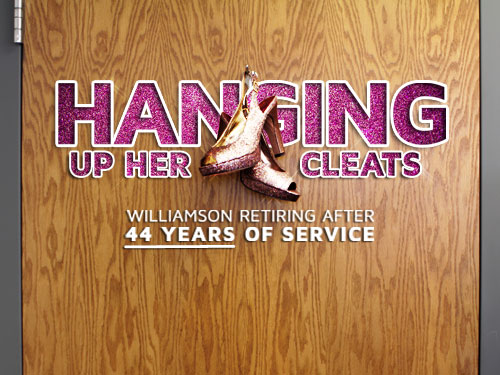 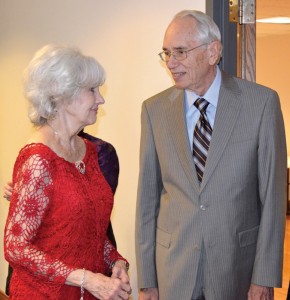 Williamson and Glenn Brown, retired editor of the Baptist Messenger, visit at her retirement reception.

Her career started and ends with a positive note.

“Miss Dana Beth Williamson of Maysville has been named staff writer for the Public Relations Department of the Baptist General Convention of Oklahoma effective Oct. 14, (1968).”

That news release sent to Williamson’s hometown newspaper, The Maysville News, marked the beginning of a 44-year career telling the stories of Oklahoma Baptist events, churches and people.

On Dec. 4, the BGCO hosted a special retirement reception for Williamson. From that time to this, Williamson has traversed the state from the Panhandle to Idabel, from Miami to Altus and points in between, as well as numerous foreign countries, interviewing Baptists and non-Baptists. Her stories uplift the message of Jesus and how He works in the lives of people and churches.

Former associate editor Bob Mathews, who worked with Williamson for a number of years, said, “We appreciated Dana, especially her proofreading skills. She was somebody we needed to back us up if we made writing errors that sometimes were overlooked. We enjoyed working with Dana.” 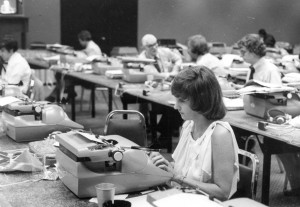 Williamson writes a news release during a Southern Baptist Convention meeting in Atlanta.

Popular columnist Walker Moore said, “Dana is rare. She is in a class by herself. She is one of the classiest people I know. We will miss her tremendously.”

Coming to the BGCO upon graduation from the University of Oklahoma, Williamson’s original long-term goal was “to be press secretary for the President of the United States.”

Quite a goal for the daughter of a Maysville grocer whose early work experience included bookkeeping, sales “as well as meat wrapping” in her father’s store. Not to mention keeping books for a grain and fertilizer company in Maysville one summer.

Williamson did make it to Washington, D.C., during college to work as a summer intern for the Bureau of Prisons in the Justice Department.

Back home in Maysville, after attending the Baptist Youth World Conference in Switzerland, she saw a Baptist Diary directory in her Sunday School superintendent’s office. Seeing a listing for a BGCO PR department, she talked to her pastor, J.V. Lobaugh, who contacted the PR director.

“He suggested I send in a resume,” she recalled. “I walked in without an appointment and the PR director, Joan Harvison, was just placing a call to my home in Maysville to arrange an interview.

“I’m convinced this is where God intended for me to be. I love what I do and enjoy coming to work,” says the writer, who was saved and baptized at Maysville, First in 1954. 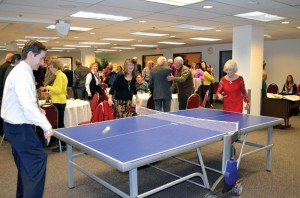 Editor Brian Hobbs and Williamson play a game of ping pong at her retirement reception.

“Dana has been a blessing throughout the years,” said Jordan. “She is one of the most recognizable writers in Baptist work. Her articles are so persuasive you feel like you know the person she is writing about.  She captures the spiritual dynamic in all of her stories. Because of her writing, readers are able to get a picture of who Oklahoma Baptists are.”

In 1994, she became part of the Baptist Messenger staff after contributing stories to its pages during Dick McCartney’s time as editor. Since then she has worked with five of the 11 Baptist Messenger editors, Glenn Brown, John Yeats, Ray Sanders, Douglas Baker and Brian Hobbs.

Williamson has a knack of wringing a good story out of what might be a “so-so” interview.

“Sometimes a story gets bumped out for lack of space or other reasons,” the writer said. “Once a story was delayed, but when it was published later, the family said it was most timely because they were in a time of remembering a loved one’s death, and it helped them emotionally. I just call it God’s timing.” 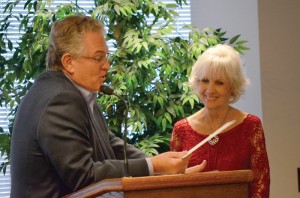 During her career, Williamson has seen big changes in technology for publishing. “I started with a hand-me-down used typewriter in the old Baptist Building on North Robinson and have progressed through a memory typewriter, photo composition, a MacIntosh computer to a PC,” she noted.

Her writing has been judged and given awards in competitions staged by the Baptist Communicators Association.

While her official duties end at the conclusion of 2012, Oklahoma Baptists will continue to read stories from Williamson, according to editor Brian Hobbs. Williamson has agreed to write for the Baptist Messenger on a freelance basis.

“We take this moment to celebrate a great career from a most accomplished writer,” added Hobbs. “This side of Heaven, we will not know all the ways her writings and stories have blessed hearts and changed lives.”

What people have said about Dana 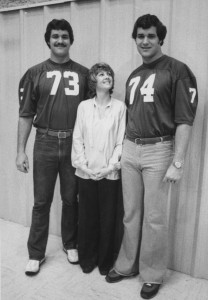 • My heartiest congratulations to Dana Williamson on the completion of 44 stellar years of service to Baptists in Oklahoma and around the world through Christian journalism. – Glenn A. Brown, former Baptist Messenger Editor, Dec. 4, 2012

• God must be pleased with you and the many great articles you write for the Baptist Messenger – Sister Mary Janelle, Dec. 24, 2004

• I cannot praise too highly Miss Dana Williamson, one of the most dedicated and efficient news pros I have ever known – Robert B. Allen, Daily Oklahoman, Nov. 19, 1973

• Thank you for your faithfulness across the years. I am proud to be a member of your fan club – William J. Reynolds, professor of church music, Southwestern Seminary, Sept. 15, 1997

• I enjoy your articles in the Baptist Messenger. You capture the heart and soul of those you write about – Anita King, March 15, 2003

• You are a masterful writer! All glory to the Father! – Chris Malone, former minister of music and worship, Moore, First, March 1, 2004

• You are a good writer! What a great career you have had and how many wonderful stories you’ve heard and written about – Judy Fallin, May 12, 2005

• Thank you for doing such a fine job with the news media… I do not think we have ever had such fine coverage – Joe Ingram, former executive secretary, BGCO, Nov. 19, 1969

• Just wanted to commend you for your good writing skills. I love to read everything you write – David Flick, July 22, 1999

• I wondered how many hundreds of times in your 40 years have you had the honor of talking to people firsthand about what God is doing around them and with their lives. Thank you for your unselfish service – Ron Walters, Oct. 13, 2008

• You are a gifted journalist, as well as an outstanding witness for our Lord Jesus! – Alan Runge, Oklahoma City, Olivet, Sept. 9, 1993

• Dana is one of the finest editors anywhere – Marlin Hawkins, BGCO controller, Sept. 8, 1997

• You are still among the best writers that Baptists have ever produced – Dave Clippard, former executive director, Missouri Baptist Convention, Jan. 31, 2006

Send a note to Dana

Oops! We could not locate your form.