Guthrie, Faith lives up to its name; eliminates debt 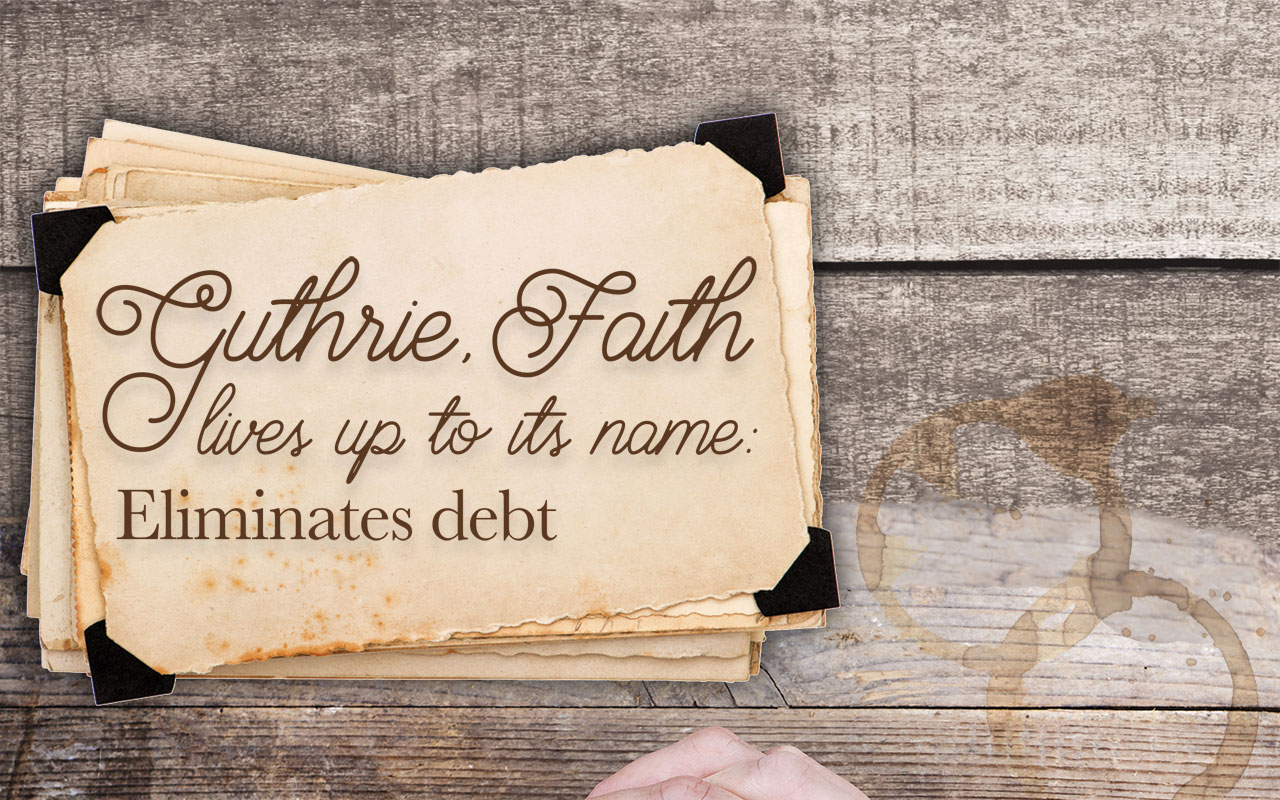 GUTHRIE—Charlie Loper, pastor of Guthrie, Faith, believes that the power of Christ as expressed by the Apostle Paul in Eph. 3:20-21 holds true for even the smallest of churches, and he can point to his congregation as an example.

On April 3, the members of this church located at 11901 S. Midwest Blvd. in rural Logan County reaped the benefits of their faithfulness at the conclusion of a 77-day challenge put before them by their pastor on Jan. 17.

“During our Annual Business Meeting on Jan. 17, the entire membership of our church made a commitment to God and to each other to do two things over the course of the next 77 days,” Loper said. ”First, that we would commit to be at church every Sunday between Jan. 17 and April 3, if it was at all possible to do so.  And, second, that we would seek God and ask Him about what He wanted each family to contribute toward paying off (the debt on) our church building on April 3. That Sunday, we would meet together for a time of celebration and worship and then collect the gifts God had prompted us to bring and present to the church what our Lord has done when we are faithful to His calling.”

Even dividing that total by 19, it means the congregation averaged $340 given by every man, woman and child in attendance that morning—a hallelujah moment, no doubt. A week later on April 10, church members celebrated God’s provision by burning the note on the loan and rejoicing together with a potluck lunch after worship.

But, God has not just blessed Guthrie, Faith monetarily. He is expanding its close fellowship, as well.

“The emphasis isn’t about the money. That is very exciting, of course, but the fact that we added seven new members is even more exciting. We went through a really dry spell for about two years before that. We struggled monetarily. We struggled attendance-wise.”

The pastor said the whole process was an exercise in unity for his small congregation.

“This was about the body of Christ; what we were doing was about the church and how important that is. How it draws us together,” he stressed.

“It’s just so much more than we expected. And, the goal of this all along is that our people would see that when we’re faithful to God, we see what God can do, and it was to start the process to see where we’re going. To see that, here, God has done this great work in us, that He has raised all of this money from this little bitty group of people. That’s a lot of money from a small group of folks, which is exciting to me because it’s a starting point for everybody to see what God is going to do next.  That’s what the focus had been on and what I had preached in Eph. 3:20-21, where God can do so much more than we can ask or imagine.

“Now, we can say, ‘OK, God, You have given us this starting point, now what is the vision for the future? Where do we go from here? What is our next goal for You to accomplish with our church?’ And to remember that being small doen’t mean that you can’t do mighty things. Being small doesn’t mean that you can’t have a mighty impact in your community.”

In addition to its worship center, Guthrie, Faith also owns a 1,700-square-foot building next door, which formerly was a convenience store. The church has turned it into the M.Y. Higher Ground Educational Community Center—named in honor of Michael Young, one of its founding members, who died in 2009.  The church also is involved in “No Strings Attached,” a group of local churches and organizations providing community service activities in the Logan County area, such as showing movies at the Beacon Drive-In Theater and other locations.

“The community center is really a big part of the vision we have,” Loper said. “We will be putting in a computer lab, kitchen, classrooms and work areas and hope to offer a variety of classes such as computer use, job search, GED, cooking, life skills and Celebrate Recovery.”

The church has begun both men’s and women’s Bible study groups. Men of Faith meets at 7 p.m. on the Second Monday of every month.

“We held our first meeting on Mon., March 14, and had nine of our men ranging in age from 14 to 83 attend,” Loper said.  “Each month, one of the men prepares and brings food for the group, and then we spend our time in a Bible study about being godly men. We look at a variety of men in the Bible and learn about the character of these men so we can apply it to our own lives.”

Loper’s wife, Debbie, is meeting with about seven of the women in the church at 6 p.m. on Sundays. The group began on April 3—a day which has become a watermark in the life of the congregation for several reasons—and is going through a Bible study based on the movie, “War Room.”

While God certainly is working in the lives of the members of Guthrie, Faith and inside the walls of the church building itself, the pastor would like to see some changes on the exterior of the structure.

“Getting our building in better shape is an immediate concern, too,” he said. “The exterior is covered in rough-hewn wooden planks—kind of rustic, if you will. And, it has a metal roof. I would also love to see a steeple on it.”

One more thing, the building, which in the past housed a volunteer fire department and then a day care center, is painted dark red. Loper would like to see it painted a different color—maybe a light grey, or blue.

Guthrie, Faith may be red, but it’s no longer in the red, thanks to a generous God and a faithful people who look to Him for every blessing as they seek to honor and serve Him.