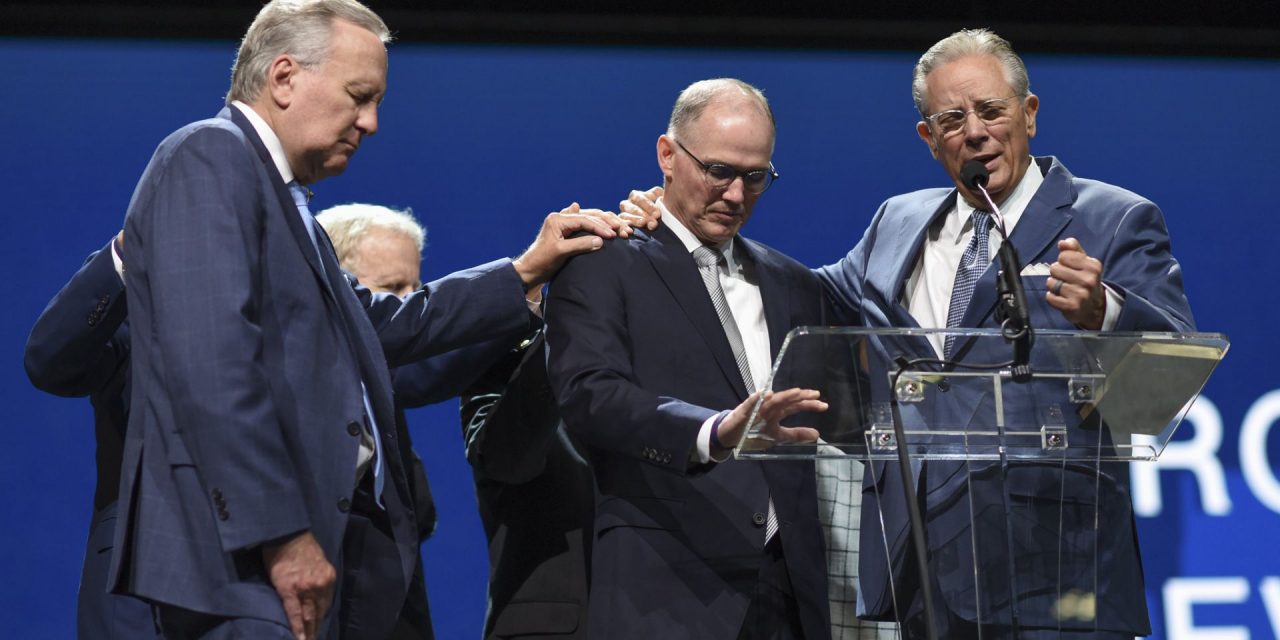 Above: D. Hance Dilbeck Jr., center, president-elect of Guidestone Financial Services, is prayed over during the GuideStone report to SBC messengers June 15 by O.S. Hawkins, who will retire in July 2022 as president and chief executive officer. Photo by Karen McCutcheon

DALLAS (BP)—GuideStone continued its focus in 2021 to live out its vision, to honor the Lord by being a lifelong partner with its participants in enhancing their financial security, President O.S. Hawkins said.

The ministry celebrated several milestones—the 20th anniversary of the registration of its Funds and the selection of Hawkins’ successor, Hance Dilbeck—and it also continued to strive to live out its mission and vision.

“We believe that 2021 will be viewed as a God-blessed year by every measure,” Hawkins said.

Among the many highlights for 2021:

Hance Dilbeck Jr. was unanimously elected GuideStone president-elect during a called meeting of the GuideStone Trustee Board on May 20. Dilbeck, executive director-treasurer of Oklahoma Baptists since 2018, accepted the call and gave thanks to the Lord, his family and trustees for the opportunity to serve at GuideStone.

Steve Dighton, the retired pastor of Lenexa (Kan.) Baptist Church and chair of the Presidential Search Committee, said the committee bathed the process in prayer to seek out the Lord’s candidate in this process.

“We established a process where we were determined only to consider prospects recommended to us from our Southern Baptist family,” Dighton said. “We solicited feedback for three months and even added one more month to give time for more recommendations to come in. A total of 15 people were recommended to the committee.”

Hawkins expressed his confidence to trustees in their selection.

“Hance Dilbeck is one of the most respected men in Southern Baptist life,” Hawkins said. “He has pastored all sizes of Southern Baptist churches, has a heart for serving pastors from small, medium and large churches; he understands the dynamics and complexity of GuideStone’s ministry, and he is a quick learner. And he is among the humblest men I’ve ever known, so he’ll be one who has a learner’s heart as he embarks on this new calling from the Lord. Susie and I are holding Hance and Julie in our hearts and prayers, and we invite Southern Baptists to join us in lifting them up.”

Dilbeck’s wife, Julie Dilbeck, previously served as a GuideStone trustee since 2019. She resigned her post at the called meeting; she did not vote in the selection process.

Mission:Dignity gives thanks for more than $1 million on #GivingTuesday

Gifts on Giving Tuesday were doubled thanks to $500,000 in matching contributions provided by generous donors.

“Ensuring dignity for these retirement-aged ministers, workers and their widows is in the very DNA of GuideStone,” Dilbeck said. “We are so thankful to the Lord for His favor in achieving this stretch goal.”

More than 2,500 people are helped annually through Mission:Dignity. The assistance from Mission:Dignity often means not having to choose between medicine and food or between gas for their car or heat in their homes in wintertime. Mission:Dignity receives no Cooperative Program gifts; all funding for the ministry comes from individuals, Sunday School classes and churches. An endowment provides for the administrative expenses of Mission:Dignity, meaning 100 percent of all gifts go directly to help retirement-age Southern Baptist ministers, workers and their widows.

Mission:Dignity recipients to receive increase in benefits in 2022

Trustees also approved higher asset limits for eligibility (from $30,000 to $45,000), an increased funeral benefit and an increased grace period after the death of a spouse before having to reapply for benefits. Those enhancements took effect immediately upon trustee approval.

Aug. 27, 2001, feels like a world away. The date Sept. 11 was not yet indelibly marked on our minds. President George W. Bush had only been president for a short eight months. Hawkins was coming up on his fourth anniversary as president of what was then known as the Annuity Board of the Southern Baptist Convention.

It was also the launch of a new era in GuideStone’s history—the launch of GuideStone Funds, the nation’s largest faith-based mutual fund family, serving over 250,000 individuals and 38,000 organizations.

Until 2001, GuideStone’s retirement plans participants could invest in one of four commingled funds. After GuideStone Funds launched, investors and their spouses could contribute to IRAs or invest for non-retirement needs.

Like most endeavors, the launch of GuideStone Funds started with a vision—in this case, to better serve GuideStone’s participants.

“When John Jones and I sat down, he told me that his dream was to launch registered mutual funds, the ultimate platform for retirement, personal and institutional investing,” Hawkins said. “It would require a great deal of adaptation, requiring many changes to GuideStone’s operations but no change to who we are as a ministry. Looking back with the benefit of two decades of hindsight, we can say it was undoubtedly the right decision at the right time.”

Twice in its first 20 years, GuideStone Funds was honored—in 2012 and 2019—by Refinitiv Lipper as the top-performing small mutual fund family in the country. Professional management, competitive performance and investments that align with biblical values make the Funds a strong choice for pastors, church and other ministry workers, as well as a growing number of individual and institutional investors drawn to the faith-based screening of the Funds.

In the last two decades, new funds were launched, including a Global Real Estate Fund, a Global Bond Fund, the Defensive Market Strategies Fund, the Strategic Alternatives Fund and the MyDestination Funds, a target-date fund series. The success of GuideStone Funds eventually allowed the organization to launch the Global Impact Fund in 2021.

As part of the celebration of GuideStone Funds’ 20th anniversary, the Southern Baptist ministry formally announced the launch of its Global Impact Fund. The new Fund, available to pastors in the Church Retirement Plan and for institutional and personal investors, provides the opportunity to own investments in organizations that seek to protect life, support evangelism, promote human dignity and enhance the efficiency and accessibility of life-sustaining resources.

“GuideStone Financial Resources is a 103-year-old Christian entity that was founded to support pastors and their widows,” GuideStone Chief Investment Officer David S. Spika said. “As a result, supporting the growth of God’s Kingdom is at the heart of everything we do. Every day, we’re focused on that mission of serving those who serve the Lord.

Dating back decades, GuideStone has screened its investments, something it continued to do when GuideStone Funds were launched in August 2001. GuideStone does not invest in any company publicly recognized as being in the alcohol, tobacco, gambling, pornography or abortion industries, or any company whose products, services or activities are publicly recognized as being incompatible with the moral and ethical posture of GuideStone. About four years ago, GuideStone formalized its efforts into advocacy with companies, which has allowed the ministry to join the front lines of advocating against such issues as opioid abuse, objectionable streaming media content, and child labor.

“We have always affirmed our faith-based approach with the investments we’ve excluded in our other funds,” Spika said. “Through our new impact fund and enhanced process, we are underscoring our commitment to that approach while proactively investing in securities and organizations committed to making a difference in the world.

“We believe impact investing is the next frontier for our organization. It allows us to take the next step through our product offerings to actively invest in organizations that do good across the globe while we promote the growth of God’s kingdom.”

Part of the management fee in the Global Impact Fund goes to support Christian causes. In 2021, donations were made to Send Relief, Southern Baptists’ effort to provide relief in Jesus’ name, and the Dallas-area Prestonwood Pregnancy Center, which helps women and families choose life over abortion.