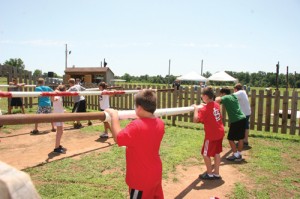 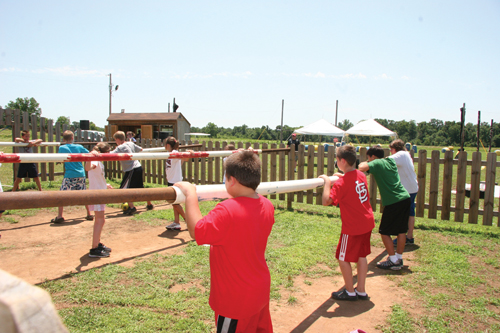 Campers at Grand Lake Assembly near Grove are enjoying two new swimming pools, part of a four-phase building program at the 50-year-old camp.

Owned and operated by Northeastern Association, the 60-acre camp grounds, purchased from the YMCA for $20,000, annually hosts a children’s camp and youth camp.

In addition, the camp is open eight weeks each summer for other camps and is used for several weekend retreats, individual church retreats and a youth evangelism rally every February.

Located on scenic Grand Lake in Northeastern Oklahoma, the camp has 1,200 beds, a 300-seat dining hall, 34 church cabins, 10 associational buildings and a tabernacle that currently seats 700, with plans to expand to accommodate 1,200.

Keith Lozier, camp manager for the past 20 years, said last year the camp hosted 6,263 campers, with 303 salvation decisions, 363 rededications and 32 surrendering to special service. There were also 2,157 campers in weekend retreats.

The two associational camps, one for children and one for youth are filled with music, a theme based on Scripture, preaching and teaching times, team-building activities and in-cabin devotions. In addition, the kids’ camp has missions, arts and crafts, Scripture memory and silly songs.

Late night concerts continue to be part of the youth camp, said James Cox, minister of youth and music at Miami, Liberty and chairman of the Grand Lake Baptist Assembly team.

Now that the swimming pools are completed, phase two of the “Forward in Faith” campaign will be to enlarge the tabernacle, which is too small and forces some attendees to spread out on the lawn.

Phase three will be a new year-round facility that will provide space for recreation including a gymnasium, meeting rooms and additional sleeping rooms, accommodating rallies, concerts and other events.

The final phase will be small, individual cabins for events such as marriage retreats where husbands and wives can stay together.

Chairman of the campaign is Kim Hayes, pastor of Lakewood Church.