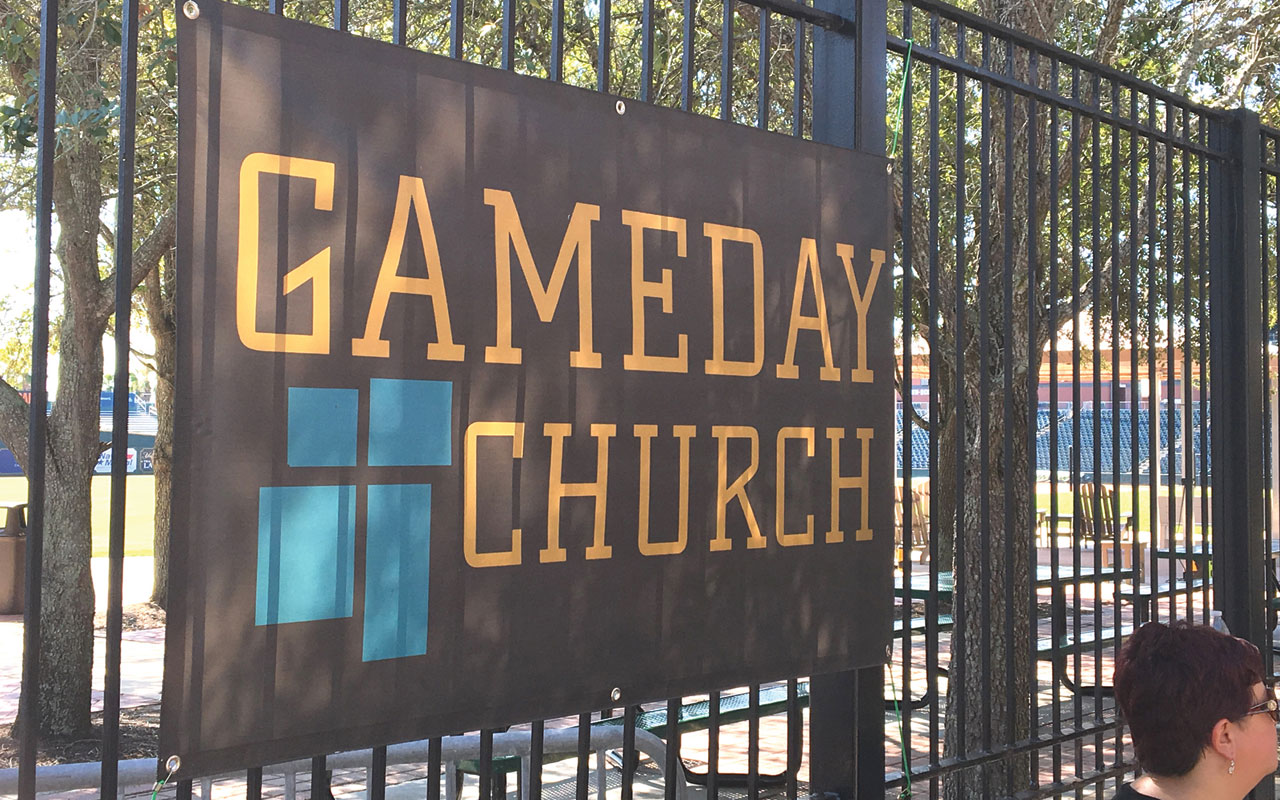 JACKSONVILLE, Fla. (BP)—When most people think about tailgating, they think of football, food and fun with family and friends.

But believers in the Jacksonville area have the chance to add faith to the mix before every Jacksonville Jaguars home game as GameDay Church returns for the 2016 NFL season.

Last year more than 200 people gathered for a new kind of worship experience as GameDay Church held its first service outside EverBank Field just before the Jags took on the Indianapolis Colts on Dec. 13.

David Tarkington, lead pastor of Orange Park, First,  and catalyst for the GameDay Church concept, said in an interview before the inaugural outreach that his desire is to take the Gospel to a place where people are already gathering.

The GameDay Church experience also gives church attendees an opportunity to invite friends and family members who might not be open to going to church, but who need to hear the Gospel. 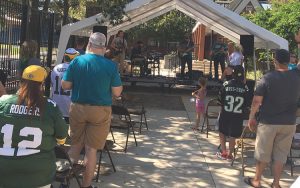 Fans gathered for GameDay Church outside EverBank Field in Jacksonville before the Jaguars-Packers game for a Sept. 11-themed Gospel message

Tarkington is excited about the opportunity to have GameDay Church at the Jaguars’ Oct. 2 game in London against the Colts. Through tour operator David McGuffin’s Exploring Europe trip, Jaguars fans can enjoy several days of sightseeing in and around London, with the option of purchasing tickets for the Jaguars-Colts matchup. GameDay Church has partnered with Harrow Baptist Church in London, and tour participants will attend church there as part of the experience.

Tarkington will have the opportunity to share the Gospel at that service, as well as some other things.

“They want me to explain American football to them,” he said.

While Tarkington and his volunteer team from Orange Park, First will take the lead, Tarkington said he is pleased to welcome another Jacksonville-area church to share in the GameDay Church outreach.

The Point, led by pastor Jeff Stockdale, will lead the Dec. 24 service before the Jaguars host the Tennessee Titans.

Stockdale said he is excited about the “opportunity to make much of Jesus in our community.”

Since Christmas Eve is a natural time for people to come to church, Stockdale said he hopes many people will choose GameDay Church as their Christmas Eve service.

Tarkington is hopeful that the next expansion of GameDay Church will venture into other cities around the state or even the country. He has been in talks with Baptist leaders in Miami and Tampa on how GameDay Church can be a part of the spread of the Gospel in those cities.

“Other churches are open to figuring out how to leverage professional sports to spread the Gospel,” he said. “We’re still in the process of seeing what will go best.”

On Sept. 11’s GameDay Church under the blistering Florida sun and right next to a Green Bay Packers tailgating party, Tarkington paid tribute to first responders and victims of the tragedy of Sept. 11, 2001, remarking that most Americans can remember what they were doing when the Twin Towers came down, making it a moment that changed everything. In the same way, the moment people meet Jesus changes everything for them, but in a much different way.

Packers fans who traveled to the game spoke to Tarkington after the service to let him know they appreciated his message.

“They said it was a message they connected with,” he said. “That’s the goal.”