BARTLESVILLE—As Francine and Laura Perry, a mother and grown daughter, recently sat down to look at a family photos, they can reflect on the good times. They also can see how God was at work, especially through the difficult times, and there were many of those.

On the heels of rebellious teenage years, Laura lived as a transgender man for nearly a decade of her adult life. Other than her family and select friends, though, most people just knew Laura as “Jake.”

Laura/”Jake” was living with a partner who also identified as transgender, and had become estranged from family members and the church. 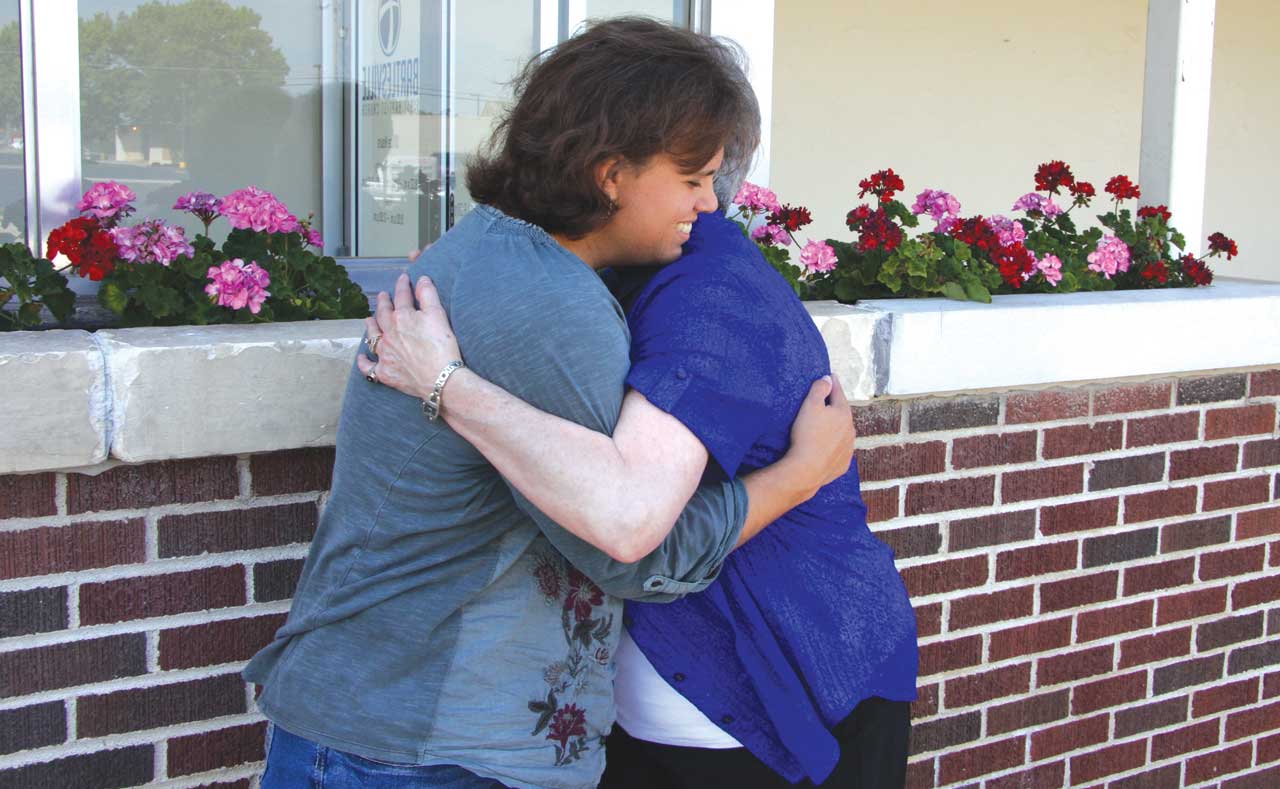 Laura Perry and her mother Francine share a hug. After many years of a rocky relationship, God has fully restored family relationships

Laura had grown up in a Christian home. Her parents, Paul and Francine, were and are active members of Bartlesville, First, where they took Laura and her siblings to church every time the doors were open.

“I grew up going to church constantly,” said Laura. “I was in Sunday School, children’s choir, GA’s, Bible Drill, VBS and more. But ultimately I lacked a personal relationship with Jesus Christ.”

Growing up, Laura constantly struggled with her sexual identity and did not “feel” like a girl. She experienced other various challenges through childhood, which culminated in poor choices in her teen years, and later embracing a transgendered life during her 20s.

When they found out about Laura’s choice to embrace a transgender male identity, Laura’s parents were devastated.

“At first I said, ‘how could you do this to us, after all we have done for you?’,” said Francine.

Though she had support from friends in church and in her ladies Bible study, Francine felt depressed and isolated because of the family’s plight.

Out of a sense of desperation and hopelessness, Francine began to dive deeper into God’s Word.

“I realized, through our ‘prodigal child’ experience, that I had a more works-based faith in Christ, a more legalistic mindset,” said Francine. “I was Pharisee-like in so many ways.”

God, though, began to soften Francine’s heart. Her ladies’ Bible study group began to lift up Laura in prayer. Yet things got worse before they got better.

Laura once wrote a letter to her mother that said, “This is what I was supposed to be. Please accept me.”

Francine and Paul began to become more open in sharing their struggles. The Perry’s also refused to believe that God would leave Laura in the transgender life. They asked people to pray.

“I bought into the lies of Satan, believing that my sinful choices would make me happy. Inside, I was miserable and searching for real peace,” said Laura. 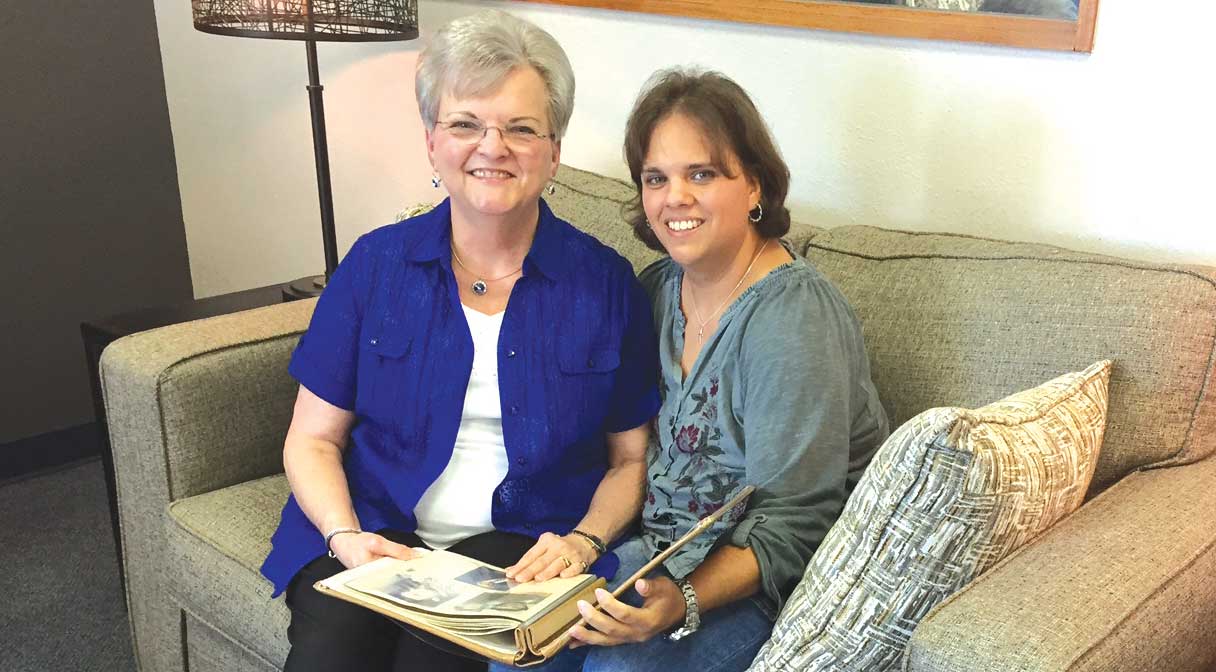 From left, Francine and Laura with a family photo album

Laura’s transgender partner happened to be a staunch political conservative, and this exposed Laura to various talk radio and teaching programs. “I got fascinated with the idea of absolute truth,” she said.

One day Laura was listening to Everett Piper (president of Oklahoma Wesleyan University) on the radio. “He was espousing political views that I agreed with, but then he would talk about the LGBT issues. I just sort of stopped up my ears when that topic came up.”

Her interest in politics led her then to listen to biblical preaching on the radio.

One day a co-worked asked if she was a Christian. “Jake”/Laura said, “Yes.”

“That was the first time in a long time that I said I had anything to do with Christianity,” she said.

It would be a long road leading home, but God began to awaken faith and belief in Laura.

“I always knew about Jesus and believed. But I had never knew Jesus personally or made Him Lord of my life,” said Laura.

Eventually, the truth began to get through, bit by bit. Through a series of God-ordained experiences and eye-opening moments, Laura began to reach a breaking point. “God opened my eyes to the truth. He made me realize that the transgender life was not His will for my life, that it was a dead end. But I was still conflicted.”

One day, though tears and much struggle, Laura prayed and asked God for help. She was, however, still in a transgender lifestyle and relationship. God continued to work on her heart.

Francine and Paul kept the lines of communication open, and met with Laura from time to time.

Francine said, “It was as if God said to me, ‘If you keep trying to fix Laura yourself, I will not. If you just sit down and leave Laura to me, I will work.’”

That began the change, not only in Francine’s life and heart but Laura’s.

Laura asked her mother one day, “Is it ok if I come to church?” Francine, who was the church pianist, struggled with the idea of Laura coming to church.

“I thought if she showed up to church looking like man, she only would embarrass us. That shows you how far I still had to go in my walk with Christ,” said Francine.

As God would have it, Laura did come to church that day, and the message was on the prodigal son. The person to feel convicted by the sermon, though, was Francine. 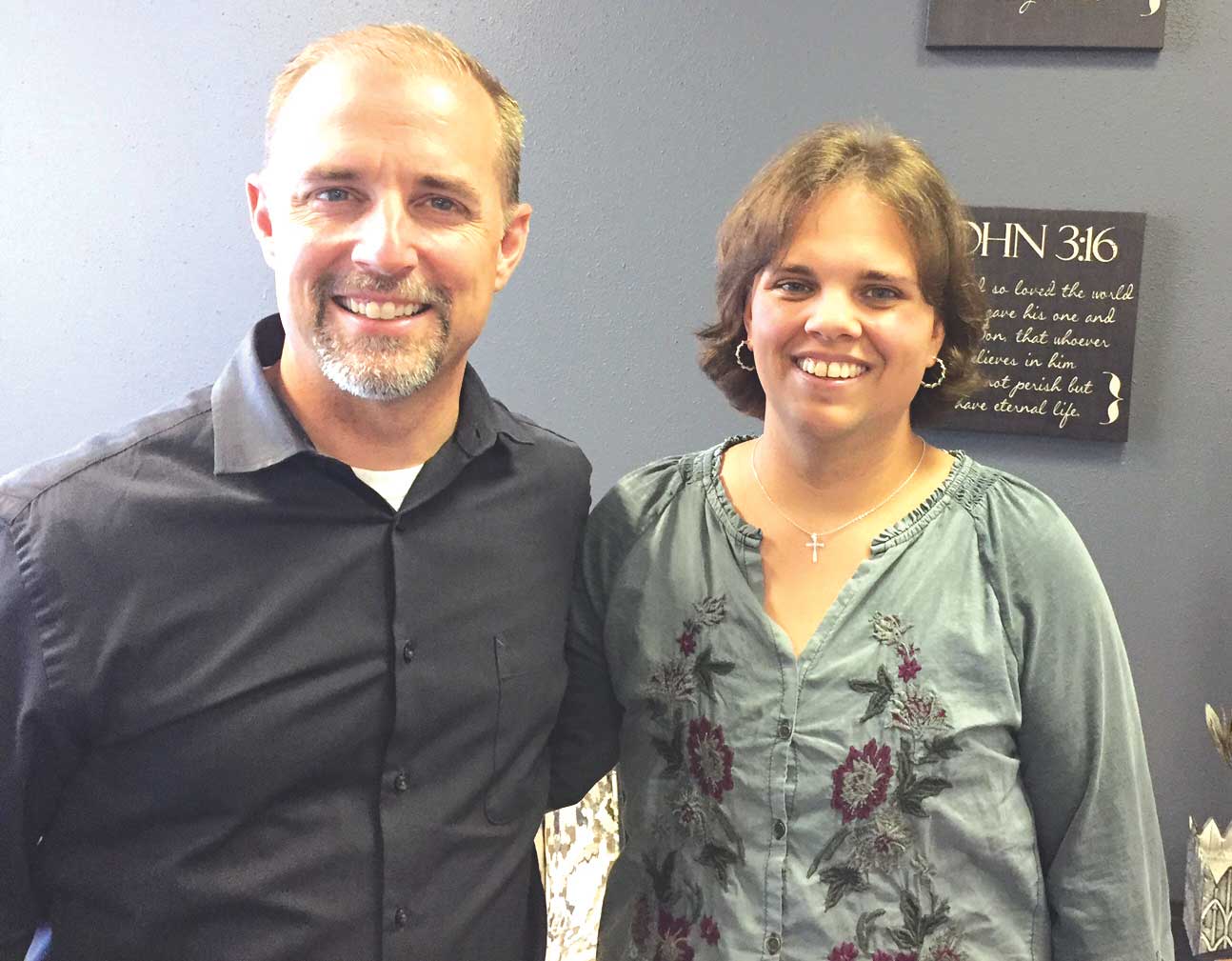 “Satan whispers in your ear along this dark road, but God’s grace won out,” Francine said.

Laura eventually made the hard, painful decision to turn away from her transgender life, leaving her partner, and made the step home, moving back home with her parents.

“I didn’t know what came next,” said Laura. “But I was clinging to God’s promise that He would take care of me. I experienced such love and acceptance from my mother’s Bible study group. It was hard, but I had never experienced such peace and love as when I came back to the church.”

The ladies group helped Laura acquire a new wardrobe, including earrings and dresses. Members of Bartlesville, First, have continued to walk alongside Laura.

Brandi Biesiadecki, wife of pastor James Biesiadecki, has mentored Laura. “It is so encouraging to see the true repentance and restoration Laura has undergone,” she said.

Last August, Laura made her decision to follow Christ public in front of the church and was baptized the following month.

Today, Laura has fully embraced her God-given sexuality as a woman, and she is active in the church.

The journey home, which took place a year ago, has led to full restoration and reconciliation. Francine and Paul believe God answered their prayers, and they believe that parents should never stop praying for their “prodigal” child or children.

They give all glory to God. “Only God could have done this,” Francine said.

“Laura’s testimony, and the testimony of the Perry family, is proof that Jesus is the answer to sin and life’s struggles,” he said. “I am so thankful for this dear family, and I pray Laura’s testimony of salvation and new life in Christ will continue to inspire many people.”

In addition to co-teaching a Sunday School at Bartlesville, First, Laura has been able to share her story in front of audiences, as well as on national radio on Tony Perkins’ program.

“I am living proof that God’s love is greater than the devil’s lies,” Laura said with a smile.