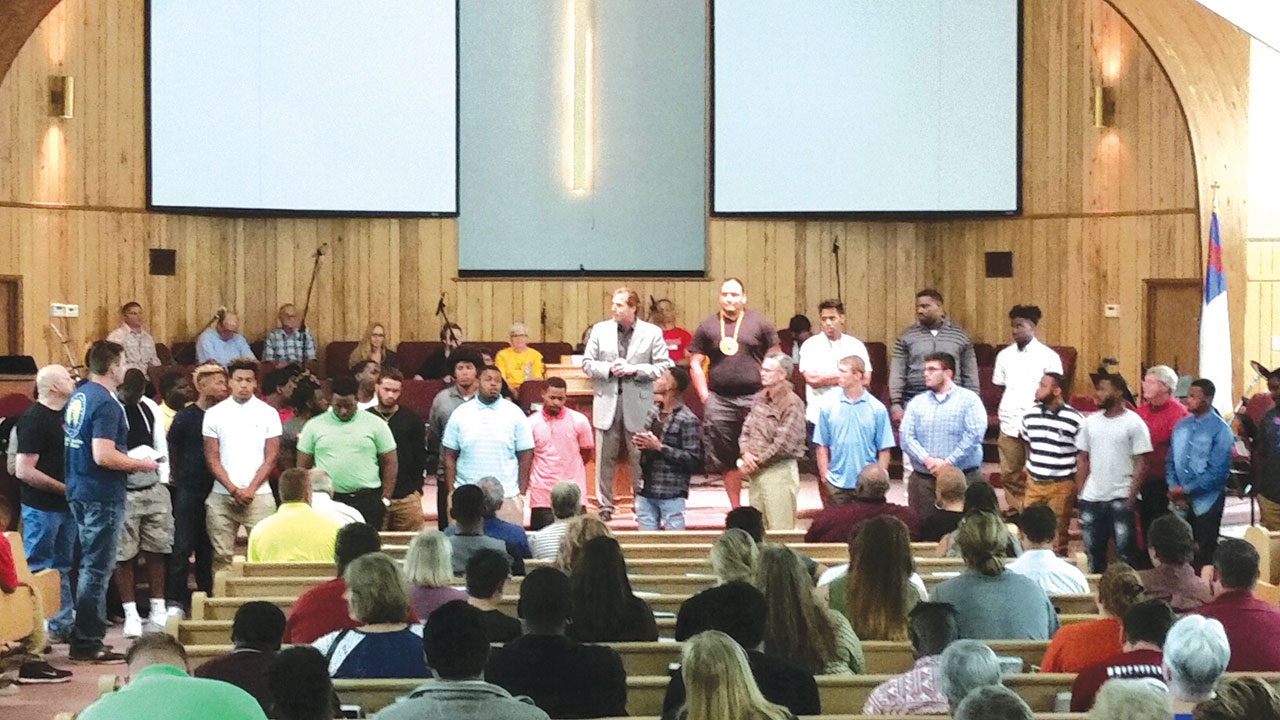 Bacone College (BC) is a small college with a strong Native American heritage. The football team competes at the NAIA level, and doesn’t get much recognition beyond Muskogee where the campus was founded in 1880.

But for Steve and Sharon Dixon and other members of Fort Gibson, First, they have invested themselves in the lives of the players for the last six years, as well as with other students, and God has blessed this relationship that has impacted the world.

“It’s a ministry of love,” said Sharon who prayed long and hard for a ministry with young people.

It started with her and Steve canvassing BC’s campus and meeting a young man named Nathan who was a dorm resident advisor. After connecting with Nathan and inviting him to church, he started inviting others.

“It’s just grown and grown and grown,” said Steve, who serves as the director of administration and education at Fort Gibson, First, after retiring from the corporate world. He and Sharon have been married for 48 years.

The individual stories of BC students, especially football players, are plenteous of how they made professions of faith, including a recent experience in a Sunday morning service. On Aug. 21, Coach Lawrence Livingston brought the whole football team to Fort Gibson, First. The squad heard Pastor Danny Gandara preach a Gospel message, and 28 football players were saved, with two players rededicating their lives to Christ.

Steve said in the past six years that Fort Gibson, First has been ministering to Bacone students they have witnessed more than 100 salvation experiences, and four of these now-former students are working in full-time ministry.

One significant story involves L.C. Brown, a defensive lineman who came to BC to play football after struggling experiences of playing at other schools.

Growing up in Southside Chicago, Brown rode a Greyhound bus to Muskogee in the summer of 2012. He had $20, but that was used to cover his overweight luggage to be shipped to the school. A teammate gave him $10 after he arrived on campus so Brown could get some food, which he used to buy bread and peanut butter.

After a few days of living on the closed campus, Brown was in his dorm room when someone told him that somebody brought a large box of food. He went downstairs and met Steve and Sharon Dixon who came to the campus with a bunch of hamburgers and side dishes after Fort Gibson, First had a cookout for the finale of the church’s Vacation Bible School.

“His arms are as big as my thighs,” said Steve recalling when he first met Brown. “When he came down the stairs, he was a little taken back. It shook him.”

Brown did not have a good impression of white people from his upbringing. For an older white couple like Steve and Sharon Dixon to offer him a bunch of food was a very foreign experience to Brown.

From there, Brown began to attend Fort Gibson, First. A couple months later, he made a profession of faith. A few years later, Brown surrendered to full-time ministry. Today, he serves as associate Baptist Collegiate Ministries director with Muskogee Association.

David Spynes has taught the college Sunday School class at Fort Gibson, First for the past eight years. He said watching Brown’s spiritual conversion has been an amazing work of the Holy Spirit.

“It has been neat just watching (Brown) grow and mature, answer the call God has put on his life. He has had a lot of influence on the other guys,” said Spynes.

Brown mentioned he and two of his teammates, Terrence Porterfield and Bryan Warren, started a Bible study on campus. He said they had 15 students show up for the first meeting. The next week, it grew to 50.

All three of these men are now serving in full-time ministry. Steve said Porterfield has religious radio program in Detroit, Mich. Warren is preaching in Fort Worth, Texas, and is working toward becoming a military chaplain.

The stories could go on, but even in the span of six years that Fort Gibson, First, led by Steve and Sharon Dixon, has been connecting with Bacon football players and other students, God has blessed the work this church in Northeast Oklahoma has done on the campus of this small college.

“A friend of mine told me, ‘You were praying for a ministry but you were too small in your prayers. You wanted something locally, but God gave you the world,’” said Sharon who mentioned former BC students of whom they’ve ministered are now located all over the United States and in other countries.

What could happen if other churches connected with their nearby colleges?