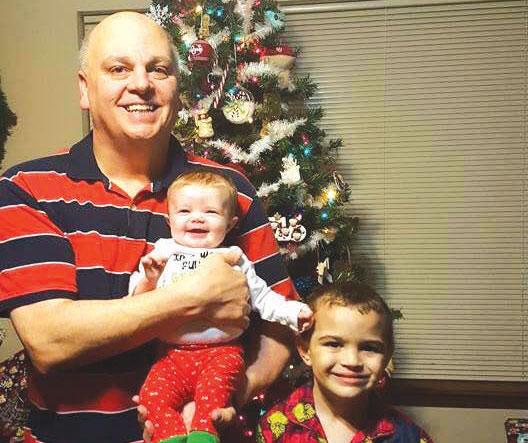 MIAMI—Wayne Wall has a testimony that begins with tragedy, has a blurry middle and ends in a victorious miracle in the Lord’s name.

In June of 2012, Wall was called as the Director of Missions (DOM) for Northeastern Association (NEBA) in Grove. NEBA is made up of 50 churches in Ottawa and Delaware counties and Grand Lake Baptist Assembly, the associational campground. Also in NEBA is the Baptist Collegiate Ministries (BCM) building at Northeastern Oklahoma (NEO) A&M College in Miami. 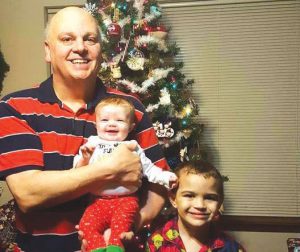 Wayne Wall posing in front of the Christmas tree with his grandchildren in 2016.

One of the first things Wall did as DOM was sell the old BCM building on NEO’s campus and purchase a more centrally-located building. The building passed inspection, and demolition of the interior began in the summer of 2013.

A few months later, Wall began to experience odd symptoms. “Some minor confusion began to cloud my mind,” he said. “We didn’t initially think too much about it, but in early November, I began to have what seemed like electrical impulses shoot through my head, causing stroke-like symptoms.”

What Wall and those demolishing the BCM building didn’t know was that they appeared to have  been exposed to dangerously-high levels of black mold throughout the building. This would be the beginning of a long journey for Wall.

Wall went to the hospital after he experienced stroke-like symptoms, where they ran tests on him. Doctors found nothing in terms of a diagnosis or answers for Wall and his family. He was sent home, until on Thanksgiving Day, 2013, he had more symptoms.

“I went to bed after putting the turkey in the oven to slow cook overnight. The next morning, my family found the turkey in the oven, barely warm. They knew something was wrong and came to check on me. I was still in bed, and was no longer cognitively aware of my surroundings,” Wall said.

The coming months became increasingly worse as Wall’s memory began to fail, and he began to experience hallucinations. His family became concerned. He required constant observation because, he described, “My wife says it was like having two-year-old in a grown up body. I couldn’t follow simple instructions, and I could no longer do anything on my own.”

Frustrated, confused and grasping for an answer, Wall’s wife, Lisa, contacted the Mayo Clinic in Rochester, Minn.. The hospital said they would take Wall’s case but not for another three months. The Walls didn’t feel like they had three months, as Wall’s mind became increasingly foggier as the time passed.

The hospital assured Lisa they would call her if anything changed. Within weeks, the call for which they had been praying came. There was an opening, and they had two days to get to Minnesota.

The doctor assigned to Wall’s case did one test and knew a diagnosis. God had arranged Wall’s doctor to be the top neurologist in the world in the area of research treatment for Autoimmune Encephalitis (AE). That was what Wall had. An infection of the brain, which was caused by exposure to dangerously-high levels of black mold, where the immune system identifies brain tissue as an invading “alien body” and then proceeds to attack healthy tissue, rather than fighting the infection. The doctor said that early diagnosis and treatment were essential.

“He said, if diagnosed within the first week of onset, a good recovery could be expected. But the longer it went untreated, the more permanent the damage is done and the possibility of a good outcome is far less likely. By then, it had been four months since onset, with no diagnosis and no treatment,” said Wall.

So Wall began aggressive treatment back in Miami. For the next two and a half years, Wall rode a roller coaster of hospitalizations, trips to Minnesota and more. He was able to return to work only on a limited basis and experienced many painful side effects as a result of his aggressive treatment.

Wall said, “Throughout the entire ordeal, my family and I were sustained by the prayers of so many believers, the promises of God’s Word and the wonderful support and encouragement of the members of Northeast Baptist Association.”

In June 2016, Wall had a relapse. The news was not good. He had not progressed since his last visit and was referred to a doctor in Arkansas who specialized in treatment of unusual neurological disorders. The doctor diagnosed Wall with 100 percent certainty with Fronto-Temporal Dementia (FTD), an incurable and aggressive form of dementia that mimics Alzheimer’s.

“I was advised to resign my position as DOM immediately and begin the process of being approved for disability,” Wall said. “She also recommended that if I had anything special that I had been wanting to do with family or friends, I should make plans as soon as possible, while I was still able to enjoy them.” The life expectancy for FTD is three-to-six years, with cognition leaving much sooner.

Wall made the difficult decision to resign as DOM, announcing his resignation at Annual Meeting in October 2016. “It was one of the hardest things I have ever done because it meant leaving my dream job. Ministering to pastors and staff and assisting churches when needed was one of the greatest joys of my life,” Wall said.

In November 2016, exactly three years after the disease began wreaking havoc on Wall’s life, something miraculous began to happen. His mind began to clear.

In the following month, Wall visited his primary doctor who told him, “Wayne, you’re as clear as you can be! I believe you’ve experienced a miracle.” The staff of the doctor’s office agreed that “The old Wayne is back!”

Wall flew by himself for the first time to Mayo Clinic in Minnesota at the beginning of 2017. He was found cognitively normal and said to no longer suffer the effects of AE. They gave Wall the green light to return to doing whatever he wanted without any restrictions.

“My doctor further told me that he no longer needed to see me and that I should live a normal life to an old age,” said Wall. The doctor then asked Wall to pray for him, because he recognized God’s healing hand in Wall’s life.

Wall then visited the neurologist that diagnosed him with FTD. She said she didn’t understand what happened, but that Wall no longer had any kind of dementia and gave him a full release to return to doing whatever he wanted to do, and that he would no longer need to see her.

“God had graciously removed my death sentence. He had done a miraculous thing to bring glory to Himself,” Wall said.

Wall now shares his story of hope and encouragement with people in many settings. The miraculous healing he has experienced is one that science can’t comprehend for which Wall is grateful, all while he holds on to the truth. “God has been and continues to be my anchor of hope.”