Fisher speaks at SWBTS, says greatness is found in serving others 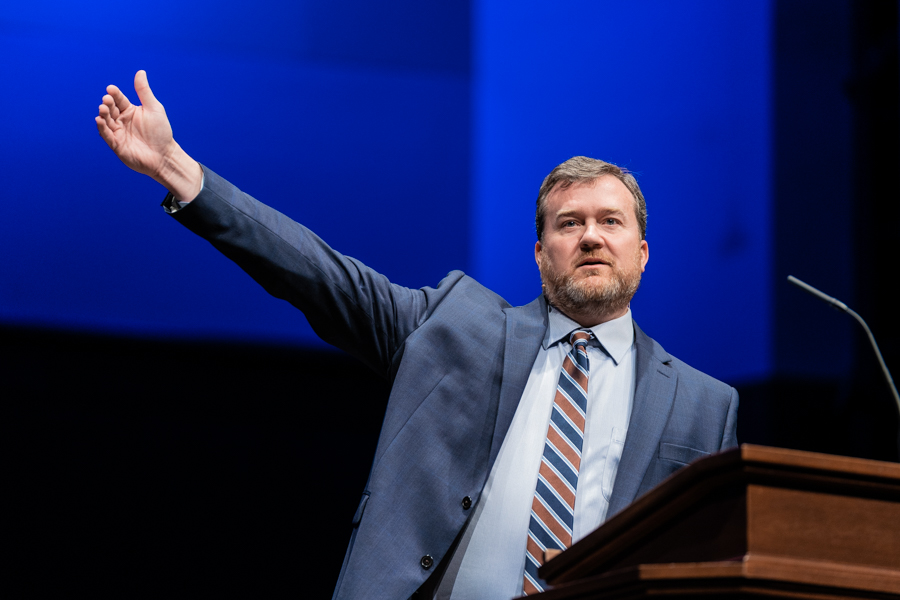 In his introduction of Fisher, Adam W. Greenway, president of Southwestern Seminary and TBC, noted his “tremendous leadership,” as well the seminary’s appreciation for “the generous Cooperative Program support and investment that comes from Oklahoma Baptists.”

Directing the assembly’s attention to Matt. 20:20-28, in which, Salome, the mother of James and John, requests that Jesus reserve a place of honor in heaven for her sons, Fisher said “greatness actually involves dying to yourself, putting yourself last, and following Christ with every fiber of your being.”

“It’s easy for any of us to misunderstand greatness,” Fisher said, observing that despite being part of Jesus’ inner circle, James and John had confused the meaning of greatness. He noted that only days away from the crucifixion, these apostles had inverted God’s values and the world’s values regarding greatness. He added, “The way Jesus views greatness, it is really concomitant with your calling in ministry, and that is to serve.”

Fisher explained that in verse 17, only a few verses before this passage, Jesus had predicted his death for the third time. He noted the apostles’ selfish response reflected a perspective of “What’s in it for me?”

Two areas of this passage reveal how Salome, James and John had misunderstood greatness, Fisher noted.

First, referencing verse 21, Fisher noted Salome’s commanding language. “If you ever find yourself in a place where you are ordering God what to do,” he cautioned, “that is a dangerous place to be.” He added that Salome’s statement implies that Jesus owed her sons a special position because they had been part of His inner circle from the beginning of His ministry.

“God does not owe you a thing. In fact, if God gave you what you deserved, you wouldn’t want it,” Fisher warned. “When you yielded your life to follow Him in ministry, friends, you already said that you would be willing to undergo many hardships.”

Referencing verse 21, Fisher also noted the other part of Salome’s command was that her sons “sit” on either side of Jesus in His kingdom. This passage implies that Salome did not want her sons to serve, but rather that they be served in His kingdom, he explained. Noting Jesus’ response in verse 28 that “The Son of Man did not come to be served, but to serve,” he emphasized the difference between the world’s definition of greatness versus Jesus’ definition.

“Greatness isn’t found in position,” Fisher said. “Greatness is found in you humbly fulfilling wherever and whatever he has called you to do.”

Fisher also noted that “greatness isn’t found in power.” Referencing verse 26, where Jesus defines greatness to His disciples, he observed, “When we put ourselves last on this earth, when we put ourselves in a position of service and death to self, friends, in eternity, we’re going to see that that’s really what mattered.”

The goal of the believer should be to live “the cruciformed life,” Fisher reminded. He said Jesus lived the crucified life, living to serve rather than to be served, which should be the model for every believer.

“Friends, if you want to be great, replicate the example of Jesus. Start washing feet,” Fisher challenged.

Concluding his message, Fisher encouraged the assembly to be “servants who would die to self, who are washing feet, who are putting ourselves last and serving however and wherever God has called us. That is true greatness.”

Fisher has served as executive director-treasurer of Oklahoma Baptists since January 2022. A past senior pastor of Shawnee, Immanuel, Fisher also served one-term as the president of Oklahoma Baptists. He earned his Master of Divinity at Southwestern Seminary in 1996.

The entire sermon can be viewed here.

Kathleen Bustamante is a writer for Southwestern Seminary

View all posts by Kathleen Bustamante