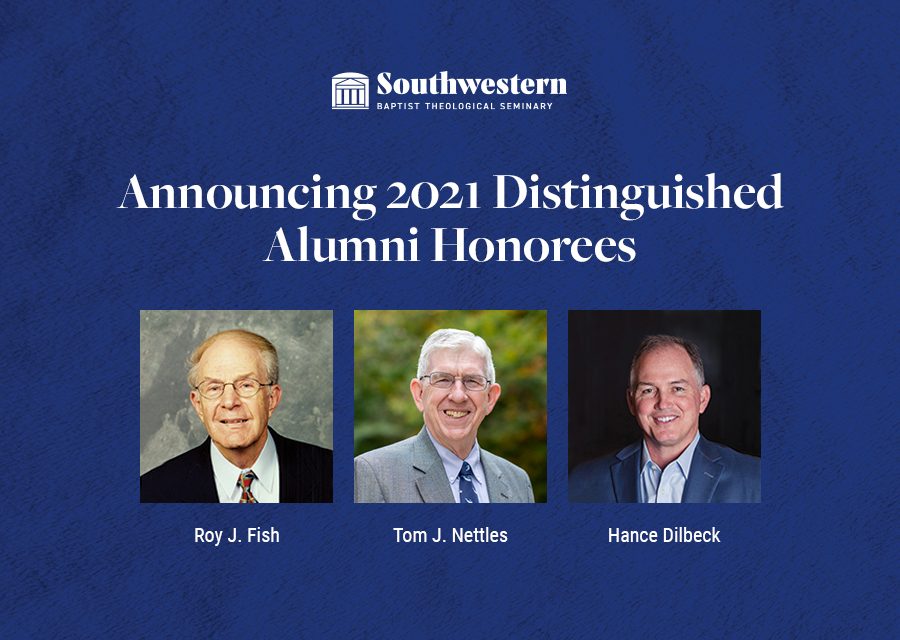 FORT WORTH, Texas (SWBTS)—Roy J. Fish, Thomas J. Nettles, and D. Hance Dilbeck will be recognized as distinguished alumni of Southwestern Seminary at the seminary’s Alumni and Friends Luncheon to be held during the Southern Baptist Convention (SBC) annual meeting in Nashville, Tenn., on Wednesday, June 16.

“I am thrilled that we will have the opportunity to honor three Southwesterners whose lives and ministry encapsulate so clearly the Southwestern Seminary tradition of scholarship on fire that has marked this institution from its founding,” said Adam W. Greenway, president of Southwestern Seminary. “Drs. Roy Fish, Tom Nettles, and Hance Dilbeck are exemplars as evangelists, scholars, and ministers of the Gospel, and are most deserving of being recognized as distinguished alumni this year. I am eagerly looking forward to regathering with the Southwestern Seminary family at our luncheon in Nashville during the Southern Baptist Convention.”

Roy J. Fish (1930-2012) served as professor of evangelism at Southwestern Seminary for nearly 50 years and formerly occupied the L.R. Scarborough Chair of Evangelism (“the Chair of Fire”). His name has become synonymous with “evangelism” throughout the SBC.

Fish began his tenure at Southwestern as a student, earning both the Bachelor of Divinity (1957) and Doctor of Theology (1963) degrees. During his subsequent time as a professor, Fish impacted the lives of thousands of students, many of whom credit him with instilling a fire for evangelism in their souls. For many years, Fish organized the annual Spring Break Revival Practicum (now called Reach This Nation), as the seminary each year sent out hundreds of student preachers across the United States to preach revivals in local churches.

Fish held several prominent denominational positions, including interim president of the North American Mission Board and second vice president of the SBC. He served as pastor or interim pastor at more than 20 churches, and he spoke and preached at conventions, conferences, and churches on six continents. He authored several books and numerous articles and essays on evangelism.

Fish was married to his wife, Jean, for more than 50 years. They had four children and 15 grandchildren.

Because Fish will receive his “distinguished alumnus” status posthumously, his wife will accept the award on his behalf at the June 16 luncheon.

During his time at Southwestern, Nettles, along with fellow alumnus and faculty member L. Russ Bush, authored Baptists and the Bible, a scholarly work that proved Baptists’ historical commitment to the inerrancy of Scripture. Published in 1980 in the early days of what would later be known as the Conservative Resurgence of the SBC, the book played an integral role in returning the convention to its historic Baptist commitments. Bush was later honored as a distinguished alumnus of Southwestern Seminary in 2006 before his passing in 2008.

In the spring of 2020, Nettles provided a new preface along with some additional material for a 40th anniversary edition of Baptists and the Bible, published by Seminary Hill Press, the publishing arm of Southwestern Seminary.

After leaving Southwestern in 1982, Nettles taught church history and historical theology on the faculty of three seminaries—Mid-America Seminary (1982-1988), Trinity Evangelical Divinity School (1989-1997), and Southern Seminary (1997-2014). After retirement, he continues to engage in research and writing on Baptist history.

In December 2020, Nettles returned to Southwestern as a visiting professor of historical theology, teaching a course on the doctrine of the Bible.

Nettles has been married to his wife, Margaret, since 1968, and they have three children and six grandchildren.

Hance Dilbeck has served as executive director-treasurer of Oklahoma Baptists since 2018. Like Fish and Nettles, he is a two-time graduate of Southwestern Seminary, having earned both Master of Divinity (1992) and Doctor of Ministry (2002) degrees. He also served at one time as chairman of Southwestern’s board of trustees.

Dilbeck pastored churches in Oklahoma for more than 27 years, including Snyder, First; Noble, First; and Ponca City, First. From 2003 to 2018, he served as senior pastor of Oklahoma City, Quail Springs. Under Dilbeck’s leadership, Quail Springs tripled in size, led the entire SBC in Cooperative Program giving and played an active part in 29 church planting efforts and one church revitalization effort.

Dilbeck and his wife, Julie, received Southwestern Seminary’s L.R. Scarborough Award in 2018 in recognition of their financial gifts to the seminary.

The Dilbecks have been married for more than 30 years and have three grown sons and three grandchildren.

To register for the Alumni and Friends Luncheon, visit swbts.edu/sbc21.