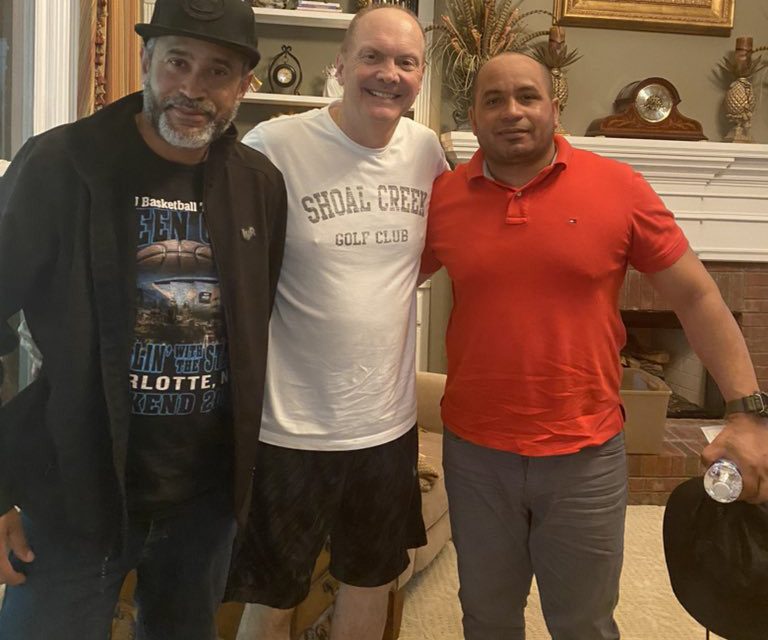 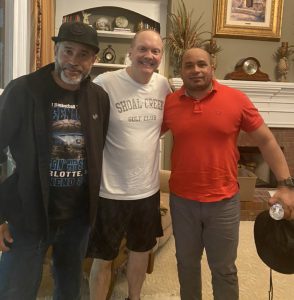 Pastor James Merritt, center, led brothers Bartolo and Osmani to faith in Christ by using the Google Translate app on his phone. Photo from Twitter.

Merritt, pastor of Duluth, Ga., Cross Pointe, an Atlanta suburb, was able to lead both men, who did not speak English, to make a decision for Christ communicating solely through the Google Translate app on his phone in what Merritt described as “one of the greatest witnessing experiences I’ve ever had in my life.”

Bartolo and Osmani, brothers originally from Cuba, were picking up some furniture when Merritt, who is also chair of this year’s Southern Baptist Convention’s Resolutions Committee, began talking to them by using the voice option on the Google Translate app.

“We always keep tracts in our home in both English and Spanish, but I was thinking in my head ‘I wish there was a way I could give them more than just a tract,’” Merritt said. “Then I realized I was holding the tool I needed right in my hands.”

Upon learning that Merritt was a pastor, Osmani asked to call his wife because she was already a Christian. Through the translator, Osmani’s wife asked for Merritt to share the Gospel with her husband.

Merritt did just that and walked slowly through the Gospel with both men through the help of Google Translate right there in his home.

Both men became emotional and prayed aloud to receive Christ. Osmani said he could not wait to call his wife to tell her he had been born again.

“The involvement of the Holy Spirit had to be over the entire situation,” Merritt said. “They were ready to leave and walk out of the door. I was just going to hand them a tract on their way out when I randomly thought of using Google Translate. I ended up using the audio function where you can just speak into the app and it will translate for you. I did not even know that function existed before.”

Merritt said with today’s advances in technology, it’s important to utilize all of the different ways we can share the Gospel with others.

In addition to the popular YouVersion Bible App and Google Translate, other resources Christians might find helpful include The Story App and The Life on Mission App from the North American Mission Board.