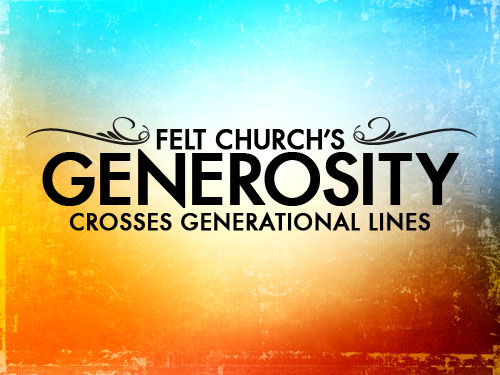 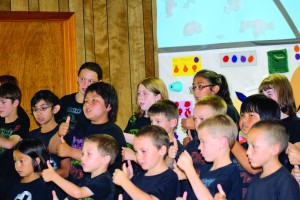 Children from Felt who normally go to Bible Club during the school year attend Vacation Bible School during the summer. (Photo: Orden Hartley)

FELT—When Pastor Orden Hartley moved to this unincorporated community in far western Cimarron County—the westernmost of Oklahoma’s 77 counties and situated at the tip of the Panhandle—he was greeted by a congregation at the Baptist church made up of hardy, God-fearing folk who take life seriously as they provide for their families by running cattle and raising crops of corn and wheat.

But, while making sure their own families are provided for, members at Felt Church are imbued with a generous spirit that drives them to help others, too.

“The folks here are awesome, and do some amazing things,” said Hartley, 52. “They have always been mission minded, and I think they just say, ‘as long as we have it, let’s use it for the Kingdom.’”

That attitude was never more evident than recently when the church mailed its annual gift for GuideStone Financial Resources’ Mission: Dignity ministry to the finance office of the Baptist General Convention of Oklahoma.

Since 1918, GuideStone has been on a “Mission” to provide “Dignity” to retired Southern Baptist ministers, workers or their widows who now find themselves struggling to meet even basic needs. Many served small, rural churches that paid only modest salaries and couldn’t afford to contribute to their pastors’ retirement.

Asked if this year’s large gift to Mission: Dignity was unusual, Hartley immediately said not really, but he admitted that he was a little surprised.

“They were very moved by the video we showed from GuideStone,” he explained. “Actually, this is our third year to do this, but this is our biggest gift yet, I believe.

Still, the timing wasn’t exactly the best, he said.

“I have always been a little bit leery about asking them to do it, because it comes right behind Edna McMillan (Oklahoma State Missions Offering).

“Our folks do that every time we collect an offering for something like that,” he said. “But, it surprised me. I really didn’t think it would go that high. But you know, for Lottie Moon (Christmas offering for International Missions), Annie Armstrong (Easter offering for North American missions) and Edna McMillan, that’s the range we usually hit.” 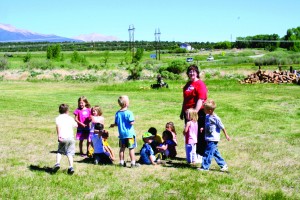 Generosity was the modus operandi of Felt Church long before Hartley got to Felt, which is named for C.F.W. Felt, chief engineer of the Santa Fe Railroad. The community, whose Post office was established on July 16, 1926, has a population of 93, according to the 2010 Census.

“The congregation was this way when I got here,” Hartley said, “but they weren’t in the habit of setting goals. Someone said, ‘well we don’t really need to set goals,’ and I said, yes we do, so we know where we land.

The pastor said the missions-mindedness of the church sets the tone for their giving.

“When they hear a need, they respond, and our giving to missions every year is high,” he said. “They know from out here in the Panhandle, it’s hard to get to different places, and so they’ve just got the mentality of if this is what is needed, and we can do it, let’s do it.”

Felt Church gives 16 percent of its undesignated receipts to the Cooperative Program and 5 percent to the Panhandle Association.

“We laughed a little while back when the state convention was making that push for churches to give 10 percent (To the CP),” Hartley commented. “Our treasurer asked me if we really wanted to drop back down to that figure from our 16 percent!”

The church’s members don’t just give of their finances, however. For example, at this time of the year for many years, they have been led by member Sharon deBoer to participate in the Operation Christmas Child (OCC) program sponsored by Samaritan’s Purse.

“I remember at some of the churches we served at if we got 20 or 30 boxes it was exciting,” Hartley said. “Our goal here this year is 200 boxes. We just missed that number last year with about 185 boxes.

“Our children are giving, too. During Vacation Bible School two years ago, they collected enough money to send about 30 Bibles to each branch of the U.S. military.

“We’re still getting letters back from folks in some of the boot camps, thanking those kids for the Bibles they sent.”

The Felt youth have been challenged by Hartley’s youth “intern” Danny Stoops, a student at Panhandle State University in Goodwell, for the OCC shoebox campaign.

“We normally run about 10 youth in Sunday School, but because of where we are, we do a Wednesday night program for all of the youth in our area of Cimarron County,” the pastor said. “We have had between 15-20 attend that. When you realize our little school has about 90 students in Pre-K through high school, to have 20 youth on a Wednesday night is awesome.

“So, Danny has challenged the youth. If they fill 50 shoeboxes, they get a pizza party, fill 55 they get pizza and cinnamon sticks and if they hit 60, they get (barbecue) wings thrown in as well. They tell me they’re shooting hard for the 60!”

And the church’s Bible Club kids (about 30 that includes the children from its Sunday School classes and others at Felt Public School) are trying to fill 100 OCC boxes just by themselves, he added.

So, the ethic of hard work, reverence for God and sacrifice for others is learned early in Felt.

“They’ll tell you it’s all of the Lord,” Hartley emphasized. “The people are very humble about it. I guess it’s just a Panhandle mentality—the cowboys and farmers and ranchers—if it needs to be done, let’s do it and get it done with.”

Something akin to loving your neighbor as much as you love yourself. Seems like Jesus said pretty much to that effect in Matthew, chapter 22.