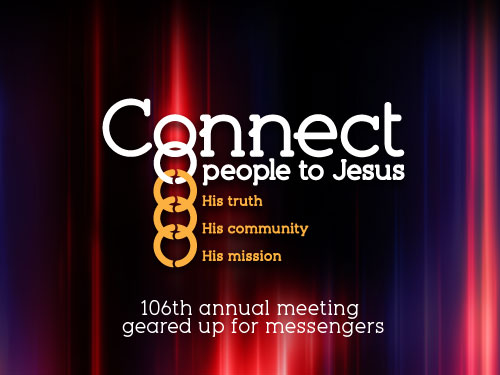 Messengers to the 106th annual meeting of the Baptist General Convention of Oklahoma will gather at Moore, First Nov. 12-13 to hear reports of convention agencies, elect officers and approve resolutions.

Theme for the meeting will be “Connect People to Jesus.”

Melton will deliver the president’s address at 7:15 p.m. Monday, with Shaddix closing the session with a speech at 8:20.

Jordan’s “state of the convention” address will be presented at 11:30 a.m. Tuesday, with the annual sermon by Kelly at 3:55 p.m. Tuesday.

Election of officers will take place during a business session on Tuesday morning beginning at 9:45 and 2:20 Tuesday afternoon, when resolutions will be adopted.

This year’s slate of resolutions will include the subjects of prayer and spiritual awakening, Sunday School, sanctity of life and personhood, covenant of marriage, religious liberty and the armed forces.

Jordan said this convention is going to be a wonderful time of looking at the past, of how God has done some amazing things through the Baptist General Convention and through the churches this past year, and looking forward to what God is going to be doing in the future.

“Our theme, ‘Connect,’ really comes out of the idea of a new emphasis we’re going to introduce on Sunday School,” said Jordan. “We came to the conclusion that Sunday School is a part of all of our churches and has the opportunity to be reenergized and refocused, and we’ll have the opportunity of connecting people in our communities with Jesus, His truth, His community and His mission. I know you will want to hear what God is about to do over the next five years as we give emphasis to Sunday School.”

Jordan added that one of the great things about messengers time together, while they do business, is the great time of beautiful music and great inspirational preaching.

“We’ll have the opportunity to hear from our Oklahoma Baptist Symphony, which is celebrating its 20th year,” Jordan said. “This group has made beautiful music as they go around our state, holding up the name of Jesus time and time again.”

Jordan noted that messengers and guests will also have the privilege of hearing Shaddix, who served as a pastor in Denver, Colo., and who brings with him the background of recently serving in Colorado, which is Oklahoma’s partnership state.

“One of the things we always do is talk about our partnerships,” said Jordan. “What God is doing in Colorado is absolutely amazing. Oklahoma Baptists have swarmed into that great state and have partnered with the people in Colorado, and we are seeing God do mighty work there. The same is true about East Asia and Mexico.

“You’re going to have the opportunity to make decisions that will impact Oklahoma Baptists for years to come.”

The convention will open at 6:15 p.m. Monday with a 30-minute concert by the Oklahoma Baptist Symphony, which will also perform at three other times Monday night. Other musical performances will be by Margaret K. Johnson and the Male Chorus from Lawton, Friendship. Congregational singing will be led by Randy Lind, BGCO music and worship specialist.

The convention will conclude at 5 p.m. Tuesday.