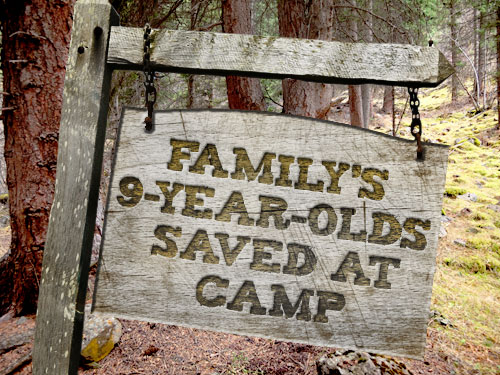 Nine has become a near sacred number to the Winkler family, as has a place called Southwest Baptist Churches Assembly.

Six members of the family spanning three generations have been saved at the camp, all at the age of 9.

Barbara Winkler-Doyle, the matriarch of the family, attended the camp in its early days with her mother and father, the late Lester and Carrie Hokett, and five siblings after chopping cotton all day in fields near their home approximately seven miles from the camp grounds. But she was saved at age 6 at Mt. Teepe Church, which was located some five miles northeast of the camp.

“I remember we all got dressed up and went to services at the camp during the evening,” said Winkler-Doyle. “But I honestly can’t remember if there was even a tabernacle there at the time. It was a special time for us.”

The camp has grown even more special over the years as Winkler-Doyles’ daughter, son, three grandsons and a great-grandson have all made professions faith there.

“My daughter, Lanette, was saved there when she was 9, and four years later, my son, Brad, was saved at the camp when he also was 9,” she said.

Years later, three grandsons, Ryan and Tyler Armentrout, Lanette’s children, and Jeremy Winkler, Brad’s son, made professions of faith at the camp, all when they were 9.

And just this summer, Winkler-Doyle’s 9-year-old great-grandson, Hayden Armentrout, Ryan’s son, told his great-grandmother that “he took the Lord into his heart” at camp. That’s 43 years after his grandmother was saved at the same location, and 22 years after his father made a profession of faith at the camp.

Winkler-Doyle, who is the longest continuous member of Hobart, Washington Street, said it makes her feel good that all of her children and grandchildren have accepted the Lord.

Well, not quite. She is praying for her 8-year-old great-granddaughter, who will be in the third grade and eligible to go to camp next summer.

And there is a 3 year old and a 1 year old coming along, just waiting for that experience at Southwest Baptist Churches Assembly.