Not just numbers, but Kingdom Impact 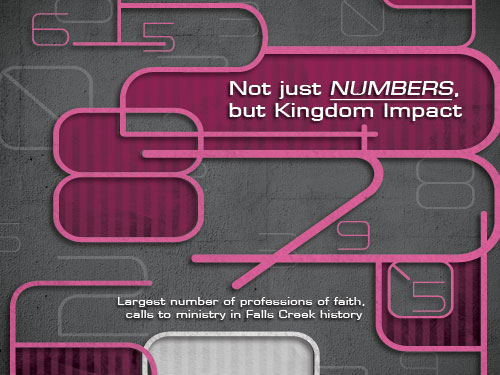 Largest number of professions of faith, calls to ministry in Falls Creek history

DAVIS—While this summer saw some record high temperatures across Oklahoma, the most important records were being broken near Davis.

This year at Falls Creek, a total of 6,595 decisions were made for the Lord. Of those, a record-breaking 2,469 were professions of faith and 1,277 were a call to special service.

The focus on prayer at camp this year has really made an impact on students’ lives and the decisions they make, according to Harrison.

Todd Sanders, student leadership strategist, said, “We have seen students deal honestly with what God has been telling them. It is always exciting to see students respond to Christ in all areas of camp, whether through the short film “Lone Pass” in our morning teaching times, in our missions areas, in the evening services, in their cabins, in small groups, in one on one conversations, at night or during the day.”

During the morning tabernacle time, teachings revolved around the fact that God hears and answers the prayers of His people. Students learned about forgiveness, intercession, thanksgiving and requests. The students were not the only ones impacted by this. Tanner Boswell, a member of the Falls Creek staff said, “It is really amazing as a staff to hear all of the prayers of the campers and see the many struggles they go through.”

Students not only learned about prayer, but they also got to experience worship in a whole new way. Weston from Cabot, Ark. said that Falls Creek “changed my outlook on how to worship. It taught me to connect further with the Lord.” Bryan from Searcy, Ark. said he learned that “worship is just praising God for Who He is.”

Sanders stressed, “We would never want to presume upon God, but we do pray with expectation that God will continue to move powerfully over the next couple of weeks and in years to come and allow us to continue to experience Him in ways that are clearly and only of God.”

In addition to on-site attendees at Falls Creek, morning and evening sessions were broadcast live over the Internet at the Baptist General Convention of Oklahoma’s website, www.skopos.org/live. According to BGCO web developer Grant Bivens, more than 8,822 different people from 30 different countries viewed a service online between June 4 and July 27. Those viewers actually hit the site a total of 11,371 times, spending an average of 25 minutes and 40 seconds watching a particular broadcast.

“There has definitely been a huge social media buzz about camp,” Bivens affirmed. “FourSquare had more than 200 ‘check-ins’ during June-July at the main “Falls Creek Baptist Assembly” location. And there were several hundred more at other locations throughout the campgrounds, such as the office, the Tabernacle and Prayer Gardens.”

Bivens added that according to one tweet search website, there have been nearly 2,500 tweets with the #FallsCreek and #FallsCreek2012 hash tags this summer.

In addition to the eternity-impacting decisions made at Falls Creek, the summer was home to countless special moments and memories. On Thursday evening, July 26, Lt. Gov. Todd Lamb and his family received special recognition from BGCO Executive Director-Treasurer Anthony L. Jordan.

“In appreciation to the Lamb family for their service to this state and the Kingdom, we have etched their name on a chair in the Tabernacle,” said Jordan. (Note: For information on the save-a-seat donation campaign, contact the BGCO development office at 405/ 942-3800 or mharkey@bgco.org.)

“Falls Creek is successful because there are so many praying for our young people,” added Jordan. “Each week is truly a work of God.”