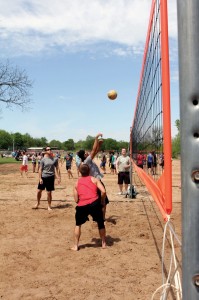 DAVIS—“God, do something this weekend that we can never forget,” was Cris Lowery’s prayer as nearly 700 young adults, ages 18-24, converged at Falls Creek Baptist Conference Center, April 10-12, for the Falls Creek Spring Retreat.

“Our hope for the weekend was for a quality event that would bring people from around the state together to be spiritually challenged,” said Lowery who serves as Baptist Collegiate Ministry specialist for the Baptist General Convention of Oklahoma (BGCO). “(The Falls Creek Spring Retreat) would allow them to build friendships that could last a lifetime.”

The people attending were challenged by keynote speaker Mike Keahbone, pastor at Oklahoma City, Cherokee Hills, to make the weekend about prayer.  He encouraged them to master the fundamental of being in God’s word.

“You will never see God move in your life if you don’t spend time with the Father,” he said. 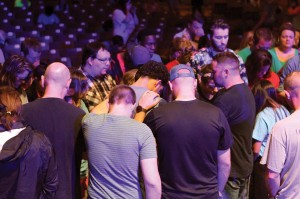 As the group who felt spiritually exhausted moved to stand before the stage, the leaders surrounded them, laid hands on and prayed aloud over them.  While one group was being lifted up, Keahbone asked another group who had “fear” to come forward and be prayed over. He then repeated these steps for “guilt and shame, family and anger at God.”

After everyone who bravely came forward was seated, Keahbone gave the challenge to “set aside time in your day just to talk to God and listen to Him. Time when you constantly pray over the guilt and shame that overwhelms you. When you pray for God’s leading of your future. When you pray for a revival and awakening.” 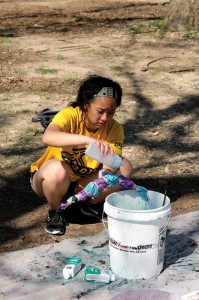 People had a variety of recreation options including tie-dye (Photo: Tiffany Zylstra)

After a time of worship with the Cody Dunbar Band, Keahbone left the young adults with “God has already done so much . . . and He’s not even tired! God loves to love on you.”

Throughout the weekend, those attending had a variety of recreation options, including the zipline, ropes courses, skate park, basketball, volleyball, tie-dye, four square and geo-cache.

Many young adults tried activities they had never done before, including the zipline. They were excited and nervous, but reached the end, ran around Baptist Lake and did the zipline again!

On Saturday, the attendees had opportunities to attend breakouts covering topics such as “Listening Evangelism,” “Navigating Difficult Conversations without the Debate,” “Keys to Planning Creative and Interactive Worship” and several others. 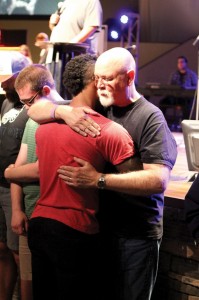 Mike Lopez from the International Mission Board asked each student attending his breakout session what their major or interest was, and then explained how that focus could be used around the world to share the Gospel.

One student from USAO said she and her best friend tried to “out listen” each other after attending the Listening Evangelism breakout.

The BCM leadership team specifically wanted international students to have opportunities to explore the Christian faith and ask questions. Through the generosity of Oklahoma Baptists to the State Missions Offering, the Falls Creek Spring Retreat was able to offer scholarships to international students.

“We took 57 students to the retreat, and 22 of those were international students,” said Grant Finley, associate BCM director at the University of Central Oklahoma. “One of the most positive things to come out of the weekend was the bonding that took place between the Internationals and the Americans.” 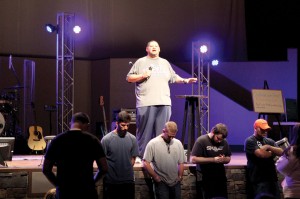 “What happened surprised me,” said Denny Freeman, BGCO collegiate ministries facilities specialist, when speaking of the weekend. “The students were really sensitive to the Holy Spirit in worship, breakouts and (even) recreation.”

Over the course of three days, young adults were rejuvenated, encouraged and challenged to make God’s Word a priority.  During the worship session on Saturday night, 14 people made professions of faith after having many conversations about God throughout the weekend.

With these results, it is obvious Lowery’s prayer was answered. 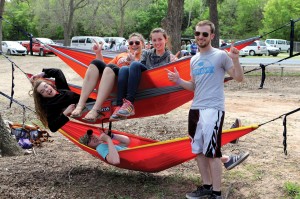