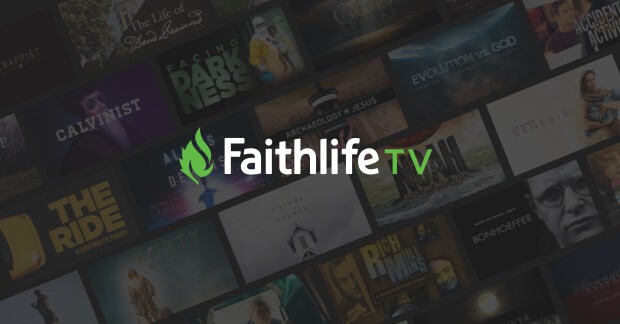 For most streaming services, entertainment is the primary goal. Think Netflix, Disney Plus and Hulu.

Then there’s Faithlife TV Plus, a relatively new streaming service that—yes—wants to entertain its audience but also wants its subscribers to learn and grow in their Christian faith.

In fact, dramatic movies aren’t even their main attraction. Instead, “edifying” content is.

There’s Fragments of Truth, which examines the reliability of the New Testament manuscripts. There’s The Most Reluctant Convert, an onstage production about C.S. Lewis. And there’s Archaeology and Jesus, which follows scholars as they journey to Israel.

The service has content for children, too, including Torchlighters, Bible Agent 7 and Gigi: God’s Little Princess.

“There’s a certain time when as you begin to grow, and you get hungry, you start studying the Bible,” Evans told me. “Maybe you go and get a concordance or you get a study Bible. Or you maybe even go get a commentary because you’re trying to dig into Scripture and go that next level. That is who Faithlife TV is designed for.”

If you’ve never heard of Faithlife TV, then perhaps you’ve heard of its sister software, the popular Logos Bible Software, which is made by the parent company, Faithlife.

“We’re used by pastors and professors and students of the Bible around the globe,” Evans said. “And so we’ve actually taken that experience, and we have brought that into the area of media to produce films… If you’re interested in really studying the Bible and digging into Scripture, we think we’ve got some fun films for you to watch.”

For Christian families who are searching for a streaming service that goes beyond the typical fare, Faithlife TV Plus is worth trying. Visit FaithlifeTV.com.

Hardy Boys, Season 2 (Hulu)—It’s a throwback detective series about brothers Frank and Joe Hardy, who—in Season 1—moved to the small town of Bridgeport, Conn., following the mysterious death of their mother. In Season 2, they continue their hunt for the truth. The series is based on the popular book series. Season 1 was family-friendly, at least for older children. Let’s hope Season 2—which will be released weekly throughout April and May—stays that way. TV-PG.

Rescued by Ruby (Netflix)—A state trooper partners with a shelter dog to train for the K-9 unit. This uplifting film is based on a true story and follows the parallel tales of two underdogs, Ruby the dog and Dan, the trainer/state trooper. It contains minor language, although VidAngel offers a filter. TV-G.

Raising Dion, Season 2 (Netflix)—A widowed mother strives to protect her young son from attention and from danger after he begins displaying supernatural skills. Raising Dion isn’t for young children, but for older children and teenagers, it might be worth a watch. Due to minor language and some thematic content, this is another one that works best with a VidAngel filter. TV-14.