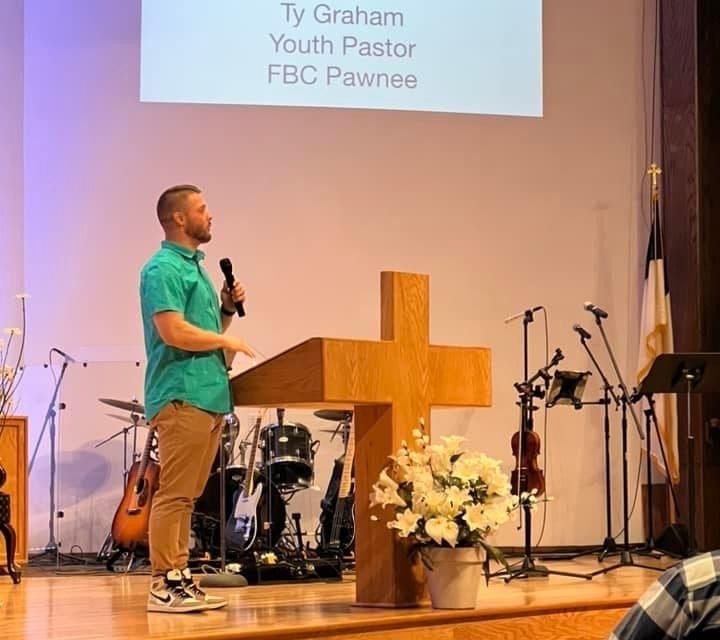 Above: Ty Graham shares his missions experience in Calgary 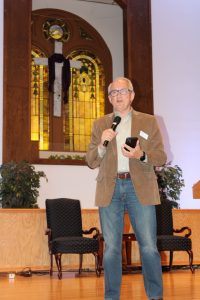 Elbert Smith shares how mission teams have an impact on IMB missionaries.

Though this was a missions conference, the event was designed with every church member in mind, since all are witnesses for Christ whether in neighborhoods or in nations on the other side of the world.

As Matt Spann, Cherokee Strip Association associational mission strategist, explained in the introductory remarks, “‘Salvation has come our way on its way to someone else’ (quoting Todd Ahrend).  You and I know Jesus because someone was brave enough to tell us about Him.” 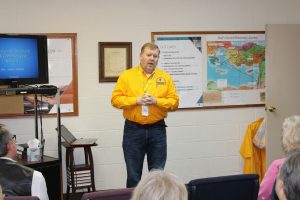 Ryan Deatherage leads a breakout session on ‘Sharing the Gospel with People in Crisis.’

During the first general session, Elbert Smith, director of the Tom Elliff Center for Missions at Oklahoma Baptist University (OBU), shared a testimony of how mission teams have had a tremendous impact in overseas contexts as they have partnered with International Mission Board (IMB) missionaries and national churches. Keynote speaker Todd Fisher, executive director-treasurer of Oklahoma Baptists, delivered a challenging message from Matthew 20 on servanthood as the key attitude in being on mission wherever you are.

After the opening session, participants attended their choice of breakout sessions designed for those just learning about missions to those at a point of preparing to lead a mission team or even go overseas long-term as a missionary:

In between sessions, participants were able to peruse displays by various organizations, including the IMB, the new Tom Elliff Center for Missions at OBU, Campers on Mission, Disaster Relief, Forgotten Ministries and Hosana Mission (Niger, West Africa).

In the concluding session, Ty Graham, youth pastor at Pawnee, First shared his experience as part of a mission team from Cimarron Association that just went to Calgary, Canada. Graham spoke of the overwhelming sense of need in an area called Simon’s Valley with 50,000 people and no evangelical witness.

Graham shared that North American Mission Board church planters in Calgary need mission teams to come and “hold the door open,” so they can do the “heavy lifting” of building relationships and doing evangelism.

In his second message, Fisher spoke on the “before and after” transformation that occurred in Moses’ life when you compare Exodus 3 and 14, attributing the dramatic change to his awareness that God would be with him and would ultimately be victorious in all things. That same awareness should embolden each Oklahoma Baptist moving forward on mission.