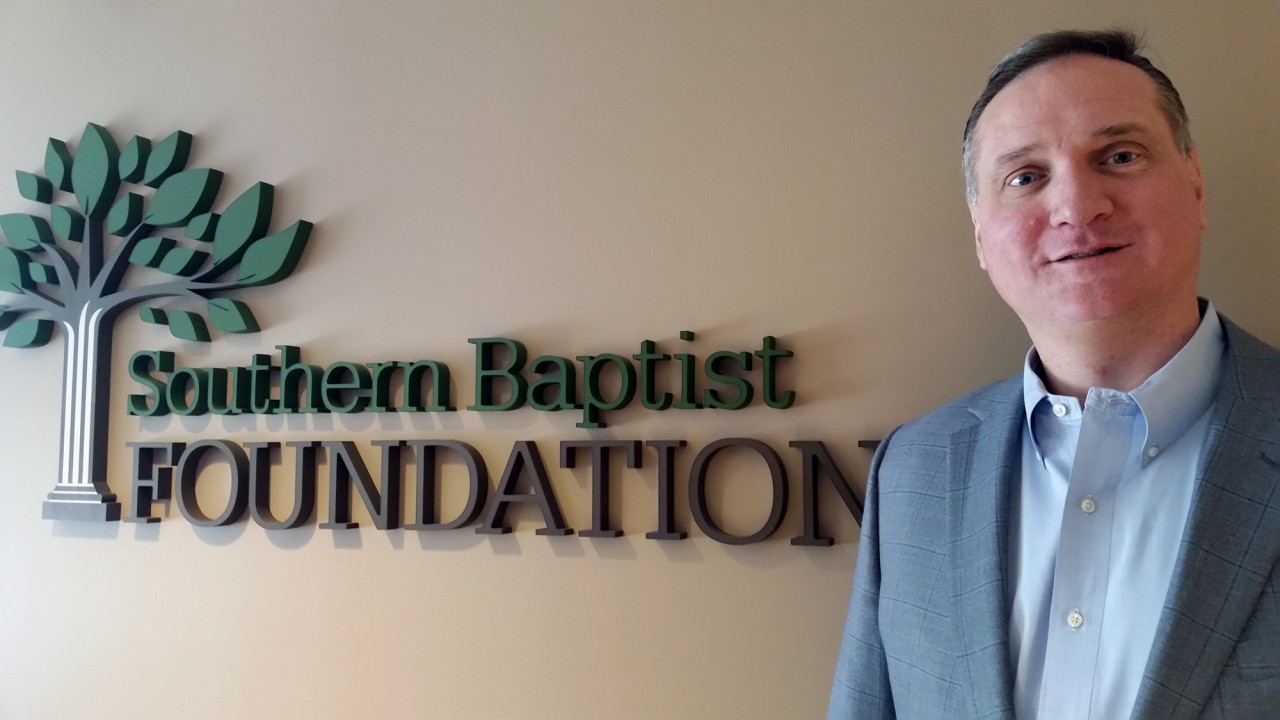 The Southern Baptist Foundation is tuned in to both.

The foundation recorded several milestones during its past fiscal year, “but we’re also about winning people to Christ,” SBF President Warren Peek said. 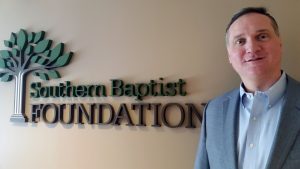 Warren Peek, president of the Southern Baptist Foundation, highlights two lasting legacies: a person’s faith in Christ and his or her stewardship. Photo by Art Toalston

The foundation counted a record 929 visits to its Plan of Salvation on the front of its website.

Internet visitors averaged 3 minutes and 56 seconds at the salvation webpage compared to 30 seconds at its “About Us” tab and 45 seconds at “Our Services.”

“The greatest legacy anyone can make is to entrust his or her life to Jesus Christ,” Peek said.

Turning to dollars and cents, Peek added, “Perhaps the greatest act of stewardship that anybody can do starts with their estate plan.”

When people tithe (the biblical practice of giving 10 percent of one’s income to his or her church), Peek said it typically comes from their checking or savings accounts or cash in hand.

But those constitute only 9 percent of an individual’s assets, Peek noted.

“People don’t tend to think about giving from the other 91 percent,” he said, such as their retirement accounts, investments, life insurance and home and personal belongings — assets that are distributed after their death.

The foundation’s work in educating and helping people in estate planning was evident, if only for a few moments, when Peek presented a $118,924.22 check to the SBC Executive Committee during its Feb. 18-19 meeting in Nashville.

The check reflected the SBF commitment to give 10 percent of its net income each year to the Cooperative Program, Southern Baptists’ channel for supporting national and international missions and ministries.

And Peek reported to the Executive Committee that another 10 percent of net income will continue to pay for estate plans for missionaries of the International Mission Board and North American Mission Board.

Such gifts are the part of the Southern Baptist Foundation’s milestone-making trajectory. During its 2018 fiscal year (Oct. 1-Sept. 30) the foundation:

— Surpassed $600,000 in cumulative Cooperative Program giving and missionary estate plans, up from just over $385,000 at the end of the previous fiscal year.

— Surpassed $4 billion in distributions to Southern Baptist causes and other Christian organizations since its founding in 1947.

— Facilitated $105,164,963 last year alone in future legacy gifts — up from $73,943,841 in the 2017 fiscal year — to such causes as the IMB, NAMB, children’s homes, the SBC’s seminaries and local churches through individual and family estate plans. Most of these gifts didn’t require a visit to the foundation’s office in Nashville but often were done by phone, the internet and interactive video.

— Surpassed more than $350 million in cumulative future estate gifts since starting its legacy planning service in October 2013, up from just over $250 million at the end of the previous fiscal year. The foundation assisted more than 1,800 individuals or families, from missionaries to people in all walks of life, invest all or part of their financial gains in Christian causes.

Through its website, the foundation also received and prayed for 204 requests for prayer in 2018, reaching a six-year total of more than 900.

Beyond legacy planning, the foundation provides long- and short-term investment management of funds held by SBC entities — investments that are screened to social consciousness. And it has worked with a number of SBC entities and state Baptist foundations on various donor initiatives.

Many ways to give

Peek often anchors his discussions of estate planning with the question, “What are the causes that you love? So why not think about giving to those causes?

“You might say, ‘But I do not have any money.’ There are many ways to give. Give your heart to God, give of your time or talent to serve, or give of your money. You can give outright gifts, you can give gifts that will provide income as long as you live, or you can make a gift that will cost you nothing such as a tithe from your estate plan.”

The foundation’s work seemingly is unlimited, even among pastors. According to a LifeWay Research survey last year, pastors age 18-44 are the least likely to have a will (31 percent). Even among those closest to retirement (age 55-64 and 65-plus) those who have a will is just barely a majority (54 percent for both groups).

Among the array of individuals and families who have made estate plans:

— an engineer who created a plan to donate during his lifetime and through his estate millions of shares of stock in privately-held companies to support the work of the IMB, NAMB and the Billy Graham Evangelistic Association.

— a never-married health care professional who prayerfully considered how to honor God with her assets and then created a plan to donate her entire estate of more than $2.5 million to support missions and disaster relief through the IMB, NAMB and its Send Relief arm and Baptist Global Response.

— a couple in Texas who designed their estate to include a donor advised fund for their selected causes and a charitable remainder trust totaling $4.7 million to benefit their children, their church and five other ministries.

— a young missionary couple who used their life insurance to fund university scholarships for children of IMB missionaries (MKs).

The foundation, a subsidiary of the SBC Executive Committee, is online at www.southernbaptistfoundation.org. A list of SBF services follows this story.