WASHINGTON (BP) — Evangelical Christians defend not only unborn children in the pro-life cause but all other human beings in need as well, speakers said on the second day of the Evangelicals for Life conference in the country’s capital.

Christian advocacy for and ministry to refugees, orphans, immigrants and the poor gained attention Jan. 19 at the third annual event co-hosted by the Southern Baptist Ethics & Religious Liberty Commission (ERLC) and Focus on the Family. The three-day conference — which concluded Jan. 20 with breakout sessions — broke mid-day Jan. 19 for attendees to join tens of thousands of others for the annual March for Life from the National Mall to Capitol Hill. 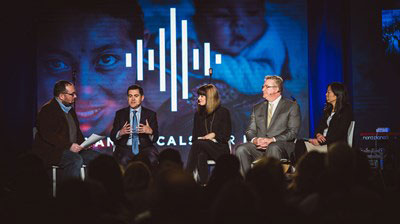 Evangelical Christians defend not only unborn children in the pro-life cause but all other human beings in need as well, speakers said on the second day of the Evangelicals for Life conference in the country’s capital. ERLC photo

At the conclusion of the Jan. 19 sessions, ERLC President Russell Moore announced more than $336,000 had been raised at a leaders dinner the same evening to fund ultrasound machines for pregnancy resource centers across the country.

In her keynote speech, popular author Ann Voskamp said, “We are a people of a robust, pro-life ethic. We are for both humans in utero and humans in crisis.”

Moore said during a panel discussion on developing a whole-life, pro-life perspective, “The primary reason that we care about all of these people is because Jesus does … [T]he reason that we care about unborn children is because they’re human beings made in the image of God. If that’s the case, then we care for all people who are made in the image of God and who are threatened.”

Rich Stearns, president of World Vision U.S., said it is “true that when the church demonstrates true compassion for all people and particularly for the poor and the vulnerable, that there’s no more powerful witness to the truth of the Gospel than this kind of sacrificial love for those Matthew calls ‘the least of these.'”

“You see, a Christian faith that is consistently and passionately pro-life is almost universally admired and irresistibly attractive to outsiders, and that’s because it’s so unexpected,” he said in a keynote address.

The Jan. 18-20 conference took place just prior to Sanctity of Human Life Sunday (Jan. 21), which the Southern Baptist Convention and many evangelical churches observed, and the 45th anniversary of the Supreme Court’s Roe v. Wade decision (Jan. 22), which legalized abortion nationwide.

While Evangelicals for Life’s (EFL) yearly proximity to the Roe anniversary and the March for Life — as well as the topics and speakers — makes clear its commitment to protecting the unborn, the issues addressed Jan. 19 affirmed the evangelical pro-life cause is an expansive one.

Speaking about care for refugees, Voskamp told the audience, “If you are passionate for Christ, then you are compassionate for those in crisis.

Voskamp’s family of nine sponsored a six-person refugee family from war-torn Syria that had undergone a two-year process of “stringent vetting,” she said. “[I]t’s relatively easy to pontificate on how to live the Gospel, and it’s infinitely harder to incarnate the Gospel in your life, but it’s worth it.”

“Now is the time for the church to be the church …,” Voskmap said of the current period marked by the massive uprooting of people from their homes and countries that has been described as the worst humanitarian crisis since World War II.

“This is us, the people who do not take out parts of the Bible to fit our agenda but [take] our lives and make them a living offering to serve all people.”

Stearns suggested American evangelicals should examine themselves about what the world sees when it looks at the church.

“Do our actions speak to our identity? Are we consistently pro-life?,” he asked.

Some of their historic positions and current opinions reflect poorly on American evangelicals, Stearns said. A recent Barna Group survey showed evangelicals were the least likely group to say they would welcome refugees, he said. Less than one-third of U.S. churches have taken steps to help refugees, he said.

“Our history suggests that we need to be more self-critical and we need to demonstrate some humility and a spirit of repentance,” Stearns said.

Jenny Yang — vice president of policy and advocacy at World Relief and the daughter of immigrants — said immigration is not just a political and economic issue.

“I firmly believe the issue of migration is a spiritual issue,” she said in a panel discussion. “It’s about whether or not Jesus wants to see people of all nations coming to know Himself. And lots of times when you’re in a place like the United States where there is freedom — religious freedom especially — they are able to choose” religious faith.

She told about a Nashville, Tenn., church that welcomed Bhutanese refugees, showed them the “Jesus” film and saw many of them come to Christ for salvation. Those refugees welcomed others from their home country, showed them “Jesus” and saw others converted. There has been “a proliferation of people who are traditionally Buddhists becoming followers of Jesus,” Yang told attendees.

Citing the ministry of churches in Kenya and Jordan, Yang said in a later address, “These churches around the world are demonstrating to us that we don’t value others because of their ability or capacity to contribute to our own well-being. … But when we as a church align ourselves with those abroad who are suffering, what we’re doing ultimately is aligning ourselves with the heart and the mission of God.”

Benjamin Watson, tight end for the Baltimore Ravens of the National Football League, said pro-lifers can also be pro-justice.

“Being pro-life does not mean you’re not pro-justice,” said Watson, who was named Jan. 21 as one of three finalists for the Walter Payton NFL Man of the Year Award for excellence on and off the field. “We can be both. There’s a little word called ‘and,’ and never let the world determine what we can be and what we can stand for.”

The idea of justice appears 200 times in the Old Testament, Watson said. The idea of justice is individual but also about correcting structural issues, he said. Justice comes from God’s character, he said, adding, “We want to identify and love the things that He loves.”

The challenge, he said, is “to be people who humbly come before God and say, ‘God, what would you have me be a champion for?'”

D.J. Jordan, communications director for Sen. James Lankford, R-Okla., encouraged attendees during a panel discussion, “Don’t be afraid to work with the social justice movement. Oftentimes we’re scared away from movements like that, but many of them [are]; using language that’s consistent with life.”

Kelly Rosati, Focus on the Family’s vice president of advocacy for children, said about 100,000 children in foster care in the country are waiting for adoption. If only one family in every third church “would welcome home a waiting child, we would have no more waiting kids in the United States,” she said.

The mother of four children adopted through foster care, Rosati asked participants, “Would you simply be willing to pray and ask God, ‘Do you want to use the blessing of our family on behalf of a child without one?'”

Trillia Newbell, the ERLC’s director of community outreach, spoke about her conversion to Christ and the pro-life cause.

“There was a time when I thought that children didn’t matter, and all that mattered were those of us who are adults,” she said. “I was pro-choice, but I wasn’t just pro-choice. I was pro-choice to the extreme.”

Saved at the age of 22, she said, “[God]; took a dead, dead girl and gave her resurrection life. God radically transformed everything about me. He transformed my world view.”

A group of about 30 — primarily high school students — from a Southern Baptist church in Texas attended the conference and the march.

Church at the Cross in Grapevine is active in the cause for the unborn, orphans, children in foster care, and Alzheimer’s and dementia patients, student pastor James Sercey told Baptist Press. The trip to D.C. for the conference and march is an effort to expose the church’s young people to and educate them about the pro-life argument, he said.

His prayer on the way to Washington, Sercey said, was that when the students walk away from the experience “what’s driving them to be pro-life is really an understanding of the glory of God and the image stamped on every person.”

The duo Shane and Shane led in worship during the conference.