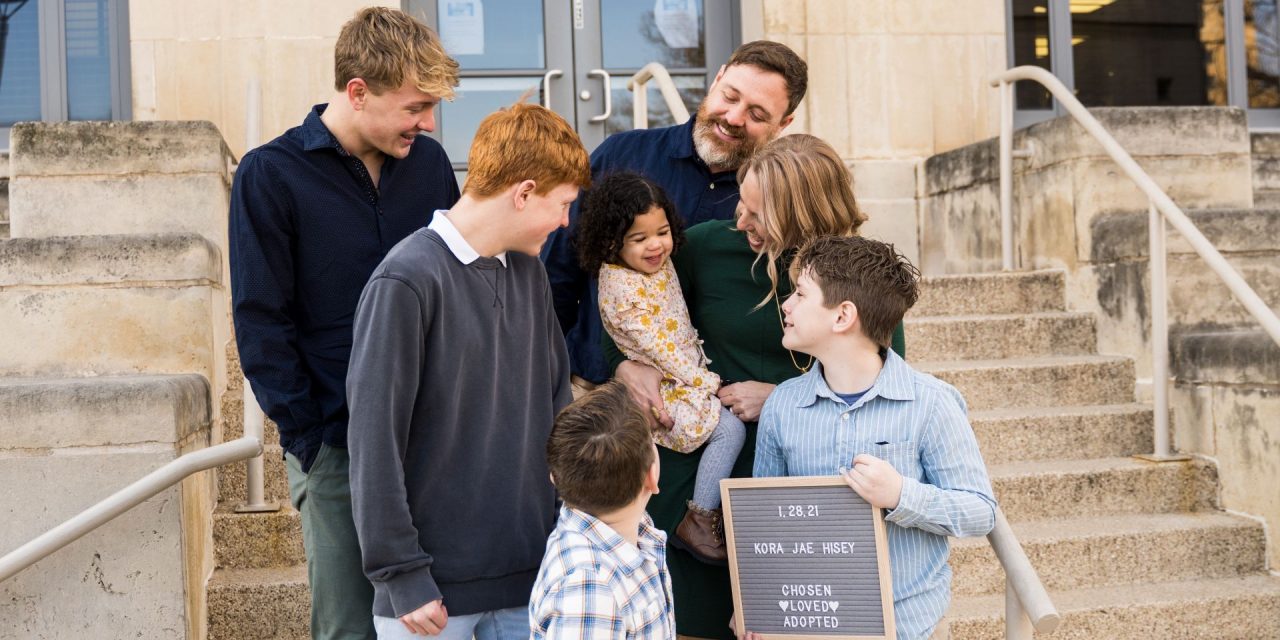 The Hiseys celebrate the adoption of Kora. The Hiseys also have inspired other members of Enid, Open Door to foster and adopt. Photo by Justin Romaine

ENID—When church planters Kevin and Meagan Hisey opened their home to become foster parents, they didn’t know how wide the door would open to influence others. Many members of Enid, Open Door are now involved with adoption and foster care.

“I had another family come up to me after church and say that they feel God is leading them to adopt,” Kevin said. “They asked, ‘Where do we start?’ God is good. We have eight families with kids either adopted or fostering right now. We have several more families that are in the process that have open homes right now and are waiting to be called. And we have multiple families helping our foster families in various ways while other families are praying about opening their homes.”

It began about two years ago when the Hiseys decided to go through the process to become foster parents.

“A friend of mine was doing a Facebook Live event talking about the need and sharing her own journey about foster care,” Meagan explained. “We are an adoptive family, but we had never done foster care before. We just knew, after hearing that conversation and praying that that was what God was leading us to do. We were certified as foster parents soon after.”

In October 2018 a DHS worker delivered a 13-day-old baby girl to their home.

“It’s definitely an interesting experience for a complete stranger to come into your house with this little carrier holding this brand new, vulnerable baby and they entrust you to care for her,” Meagan said. “We sat there for a second and had to catch our breath thinking, ‘Wow God, you called us to do this.’”

Over the course of time, the Hiseys believed God was calling them to adopt the child. Almost a year later, the birth mother signed papers to relinquish her parental rights, which opened the door in the summer of 2020 for the Hiseys to adopt the girl, named Kora, as their daughter. The adoption was finalized last January. Kora is now 2 and a half years old.

The Hiseys have continued to foster and encourage others to do so. They fostered another baby during the pandemic lockdown, a 10-month-old boy who stayed with the family for six months. Meagan shared how God moved another couple, who were praying for a baby, to now care for this child.

“It took a few months,” she said, “but (the couple) were certified, and we were able to transition the baby over to them. Now we still see him; he’s still in our church. And our whole church has rallied around this little boy.”

More church members have been inspired by the Hiseys’ adoption journey to explore foster care and adoption.

“People started praying and becoming more available to help us, and since then, many families have started fostering,” Kevin said. “Our example to go first gave others the courage to foster. And we get to see that ripple effect.”

Grant and Kalli Mason are another couple who were inspired by the Hiseys. Kalli said she was encouraged after she had a conversation with Meagan at church about a year ago.

“I have always also known that I wanted to adopt,” Kalli said. “I had been praying, wanting to become a mom for about a year at that point. So when Meagan (was talking to me), I just started crying. She said, ‘You want to have a baby don’t you?’ And I said ‘Yes,’ but I have always known I was going to adopt, and I am open to it.” The Masons are now fostering

“It’s really neat that God brought other families who have adopted into our church,” Meagan said “We have a family that has adopted 11 children from China. Another that has adopted two children domestically. We have a family that has two biological children, and one adopted through DHS. These are just within the first 200 people that have come to our church.”

To learn more about foster care and adoption visit oklahomabaptists.org/foster-care. To watch a full podcast interview with the Hiseys, visit baptistmessenger.com/podcast.