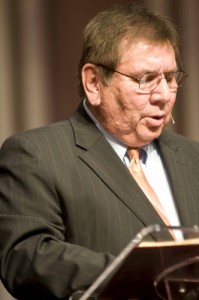 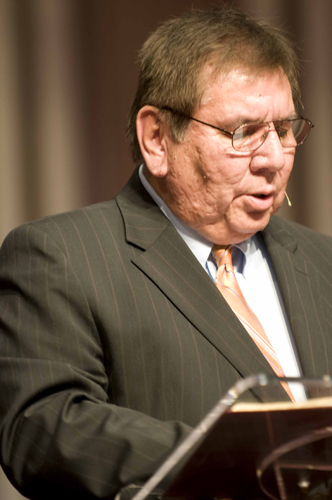 It’s not about how many people we can get into the church building, but about how many disciples we can send out, Emerson Falls told messengers gathered for the opening session of the Baptist General Convention of Oklahoma at Moore, First.

“We’re here to kick in the gates of hell,” said Falls, pastor of Oklahoma City, Glorieta, who is completing his first term as BGCO president. “We should be winning the war in this country, but we aren’t doing the disciple making Jesus commanded us to do.”

He said when he was serving in Vietnam, the U.S. military did not and could not cross the 17th parallel into North Vietnam. Things might have been different if that had happened, he said.

Falls said one of his pet peeves, is name droppers, but he is not sure most could name names of the lost in our communities.

“How can we win them if we don’t know them?” he asked.

Falls told about working with RAs and coaching a basketball team.

“I always told the player if they came to practice, they would play in the game,” he said. “We made it to the RA state championship game one year, and towards the end of the game, there was a two-point difference in the score. I realized I hadn’t played Mark, who was a great RA, but not so great a basketball player. But he never missed practice, so I put him in the game. He dribbled beautifully and put up a tremendous shot scoring hid first two points of the season. The only problem was, he shot at the wrong basket. He made two points for the other team.”

He told about the trip he made recently to East Asia, which messengers will vote on as a partnership area.
“I saw a tremendous movement of God there,” he reported. “Christianity is growing, and every day, people are being won to the Lord. There are not many mega churches there, because they are restricted by the government. They are not interested in building fortresses, but in making disciples. They are doing what was done in the New Testament.

Falls, a native Oklahoman who grew up just a few miles from the church where he is now pastor, said he has made some changes in his life since returning from East Asia.

“I’m spending more time in prayer and more time with lost people in our community,” he said. “I have set a goal of personally leading one person to faith in Christ every week and teaching them to lead someone to Christ.”

He emphasized the way you teach people to win others is to go out and win others.

“I don’t have anything to preach if I’m not living it,” he said.

He told of the funeral of a man who was killed during a fight outside a bar.

“The family didn’t have a church home, and I was called,” Falls said. “Our church was helpful, did the funeral and took food to the home. During the funeral service, I preached on John 14. Afterwards, at the family home, the mother of the victim called me into the kitchen and said, ‘You said the only way to get to Heaven is to know Jesus Christ. Where is my son? He never received Jesus.’”

Falls said he tried to be gentle.

“I didn’t want to tell her that her son was in hell,” he said. “But she said, ‘Why didn’t someone tell us this before?

“We don’t connect with secular people. This has got to change.”.
.